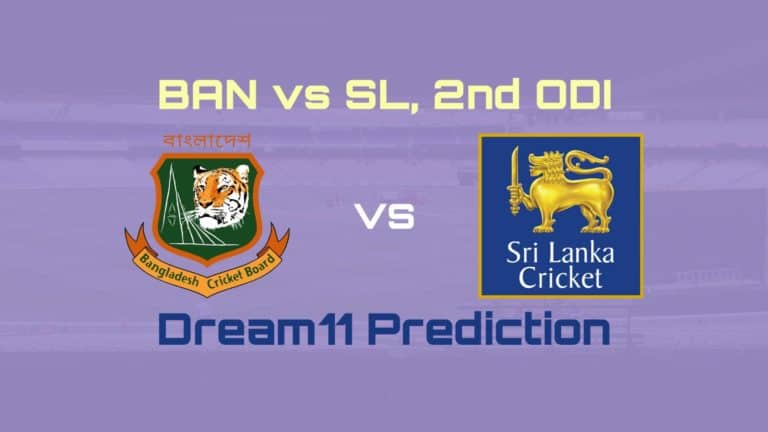 After a successful retirement of Lasith Malinga from one-day cricket, Bangladesh and Sri Lanka will meet in the second ODI at R.Premadasa Stadium in Colombo. We will provide BAN vs SL Dream11 Team Prediction, Preview and Probable Playing XI for the match.

In the first ODI, Sri Lanka defeated Bangladesh by 91 runs. Batting first, Kusal Perera scored brilliant knock of 111 runs and was supported by Mendis and Mathews to take the team to a total of 314. Mathews scored 48 while Mendis scored 43 runs. In addition, Karunaratne got out after getting a start on 36 runs. With ball, Shaiful Islam took three wicket-haul while Mustafizur Rahim took two scalps for Bangladesh.

In the chase, Mushfiqur Rahim scored good knock of 67 runs after a top-order failure. Along with him, Sabbir Rahman played attacking knock of 60 runs but was ultimately left behind by 91 runs. All-time legend Malinga took three wicket-haul in his last ODI along with Nuwan Pradeep who ended with similar figures. Dhananjaya De Silva also took two scalps to restrict Bangladesh at 223. Sri Lanka will hope to continue the winning momentum while Bangladesh will wish to improve their win-loss record at this venue to keep the series alive.

Pitch will support batsmen more. However, It will slow down as the match progresses. An expected score is 300 runs.

Bangladesh has a dismal record here and has lost all the nine encounters on this venue.

Kusal Perera will bat at one down for Sri Lanka and plays in attacking manner. He scored brilliant 111 runs in the last encounter.

Mushfiqur Rahim is in excellent form and is a consistent performer. He scored 67 runs in the first ODI.

The skipper of Sri Lanka Dimuth Karunaratne has starred with the bat for Sri Lanka. He is a technically strong batsman and scored 36 in first ODI.

Angelo Mathews is the most experienced batsmen of the team and has performed well in recent times. He scored 48 in the last match.

Saumya Sarkar has shown attacking intent opening the innings. He scored 15 runs in first ODI and can also bowl a few overs of medium pace. He took one wicket in the last match

Skipper Tamim Iqbal got out on a duck in the previous game and will be eager to play a big knock tomorrow. His recent form is inferior.

Kusal Mendis scored 43 runs in the first ODI. He has the talent to play a big knock on his day and can be a good pick in SL vs BAN Dream11 team.

Avishka Fernando has performed exceedingly well for Sri Lanka in limited chances in international circuit and displayed his talent scoring pressure releasing knocks in WC’19. He can also bowl a few overs of medium pace. He is likely to open for Sri Lanka.

Mahmudullah has performed consistently for Bangladesh and plays in an attacking manner in the middle order. He failed in the last match.

Sabbir Rahman scored attacking 60 runs in the last match and can also bowl a few overs of leg-spin.

M Mithun will bat at one down in the absence of Shakib and is a talented batsman. His recent form is not that good.

Lahiru Thirimanne will play the role of a finisher and scored 25 runs in the first ODI.

Dhananjaya De Silva is a technically strong batsman and will lead the spin attack of Sri Lanka. He scored 18 runs and took two scalps in the last match.

Thisara Perera has been in poor form from the past few months. He can be handy with the bat as well as ball and is the X-factor of Sri Lanka team but failed in all matches of WC’19. He will also bowl his quota of overs and is a good finisher.

Mosaddek Hossain has made handy contributions with the bat as well as the ball in recent times and can be a good pick among all-rounders.

Mustafizur Rahman is a talented left-arm pacer and is lethal in initial as well as death overs. He took two scalps in the last match.

Nuwan Pradeep is a hit-the-deck bowler and has performed well for Sri Lanka. He took three wicket-haul in first ODI.

Mehidy Hasan will lead the spin attack of Bangladesh and can chip in with wickets at regular intervals. He can also be handy with the bat.

Pacer Rubel Hossain can trouble batsmen with his pace and bounce. He took one scalp in the last match.

Shafiul Islam took three wicket-haul in the last match and can be a good option in the bowling category.

Lahiru Kumara is a good pacer and bowled well in first ODI.

Isuru Udana is death over specialist and can also play quick cameos with the bat. He may play tomorrow.

If you liked Bangladesh vs Sri Lanka Dream11 Prediction, Then follow us on Twitter for Dream11 Team and Fantasy Cricket Tips.