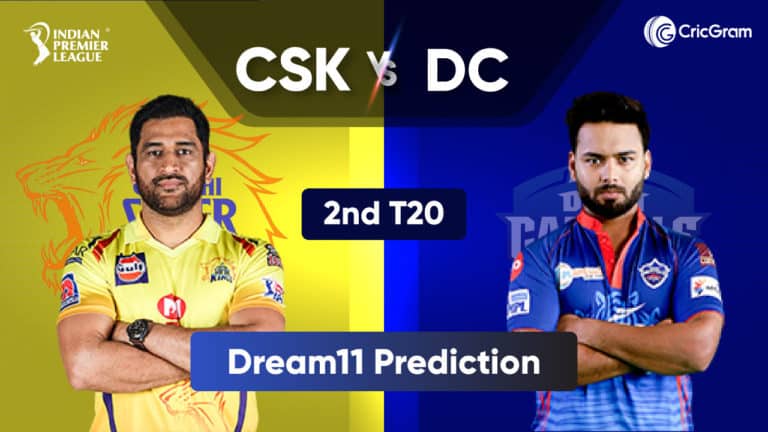 CSK vs DC Dream11 Prediction, top picks and player stats of the 2nd match of IPL 2021. Chennai Super Kings and Delhi Capitals will play in the 2nd Match of IPL 2021 at Wankhede Stadium, Mumbai.

Chennai Super Kings has been the most consistent team so far in the history of IPL as they have qualified for playoffs in every season except for the last season. They had a tough time last season and finished at the 7th position on the points table. Super Kings have three season titles to their name.

The No.3 position will be continued by Veteran Suresh Raina, who had missed the last season due to personal reasons. In the middle-order, CSK has many options out of whom MS Dhoni and Ravindra Jadeja are sure to play. Among Rayudu, Pujara, Jagadeeshan, Sam Curran, and Mitchell Santner, it is up to the management and MSD to want to play.

In this season, CSK has a good number of fast bowling options in Shardul Thakur, Deepak Chahar, Lungi Ngidi, Jason Behrendoff, and Sam Curran. It is well known that Super Kings are majorly dependent on their spinners, and also they have got a good set of spinners like Jadeja, Imran Tahir, Santner, Karn Sharma, and Sai Kishore.

Chennai Super Kings look strong on the paper, but there is a lot of confusion about who will be playing XI for the first match this season.

Delhi Capitals has been a decent franchise that had success in the initial season of IPL but lost track after, and again they have been performing well from the last few seasons. They are yet to win an IPL title.

Shreyas Iyer, who was leading the side for the past two seasons, suffered from a shoulder injury in the recent T20I series. The captaincy responsibilities have been given to Rishabh Pant. The exact opening pair Shaw and Dhawan are likely to open this season because both of them have appeared to be in good form in the recent matches.

Steve Smith might get a chance to bat at No.3 as he generally bats at this position for his national team. The middle-order will consist of Rishabh Pant, Marcus Stoinins, and Axar Patel. There is also a chance for Shimron Hetmyer to be in the playing XI.

DC has probably one of the best fast bowling line-ups in IPL as they have speed guns like Rabada, Nortje, Umesh Yadav, and players like Ishant Sharma and Avesh Khan. They also have experienced players like Ravichandran Ashwin and Amit Mishra, along with the young Axar Patel.

The team looks good, and under Ricky Ponting’s coaching, they had gone to the finals in the last season. We can expect the same performance from Delhi Capitals this season.

The pitch here is considered to be very good for batting. The bowlers might get some help in the initial overs of the match, but it’s a complete batting paradise after that. We can expect high-scoring games from this venue.

He is a right-handed batsman and generally opens the innings for CSK. Du Plessis had a very well last season and would be hoping to continue the same. He is very good Captain/Vc choice for CSK vs DC Dream11 Fantasy Team.

Raina is called Mr.IPL for his consistent performance every season. He did not play the last season due to personal reasons.

He is a right-handed batsman and bats at any position depending on the team’s requirement. Rayudu has been performing well for CSK with the bat.

He is a young right-handed batsman and made his debut in the last season. MSD promoted him up the order in the previous few matches, and he batted brilliantly and impressed everyone.

He is a left-arm medium-fast bowler and can also play some big shots down the order. Curran has appeared to be in good form in the recent matches played against India.

He is an all-rounder and is equally good with both bat and ball. Jadeja was in excellent form before he got injured. He has recovered now and has been practicing with the team.

Shardul Thakur is a right-arm medium-fast bowler and can also be handy with the bat down the order. He can be expensive sometimes but consistently picks up wickets.

He is also a right-arm medium-fast bowler and is known for his swing deliveries in the early overs.

He is an all-rounder and is equally good with both bat and ball. Bravo left the last season mid-way due to injury.

Dhoni is the team’s wicketkeeper-batsman, and there have been rumors that this will be his last season. He had a tough time last season in scoring runs.

Dhawan is a left-handed batsman and opens the innings for the team. He had a brilliant last season as he scored two consecutive hundreds. S Dhawan is very good Captain choice in CSK vs DC Dream11 Team.

Smith is a right-handed batsman and bats at No.3. He is a decent striker of the ball and plays the role of anchor very well.

He is the wicketkeeper-batsman of the team and can cause havoc in the middle and death overs. Pant will also be leading the side this season.

He is a right-handed batsman and opens along with Dhawan. Shaw had a terrible last season but has performed brilliantly in the recent domestic matches and is looking in good form.

Stoinis is an all-rounder and is equally good with the bat and ball. Stoinis can play the role of finisher very well.

He is a right-arm fast bowler and can also bat down the order. Woakes did not play the last season due to personal reasons.

He is a right-arm off-break bowler and is one of the experienced players on the team. Ashwin performed well in the last season and has also picked up wickets consistently in the recent matches.

He is a right-arm fast bowler. Umesh might be expensive, but he bowls at a perfect pace and also picks up wickets consistently.