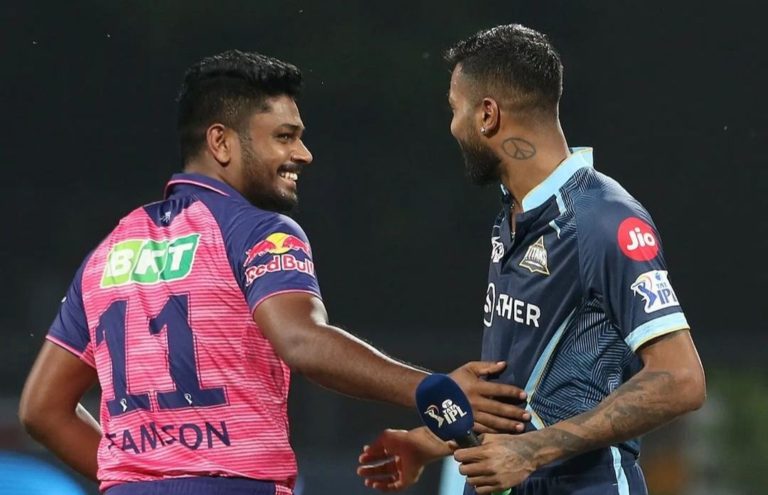 Gujarat Titans won: IPL 2022 match number 24 was played between Gujarat Titans and Rajasthan Royal, in which Gujarat defeated Rajasthan by 38 runs and this is Gujarat’s fourth win in 5 matches, and with this victory, GT reached at top of the points table. And the biggest contribution to this victory was the captain of Gujarat Hardik Pandya, who performed well with his batting, bowling, and fielding.

By the way, for your information, let us tell you that despite the early wickets falling early, while batting first, the Gujrat team set a target of 192 runs with the help of Hardik Pandya and Miller in front of Rajasthan Royals for the loss of 4 wickets. And by chasing it, RR’s team could score only 155 runs with the help of Butler’s half-century and lost the match by 38 runs.

Gujarat Titans opener batsman Shubman Gill and wade flopped in two consecutive matches, and could not give their team a good start, And both the opener batsmen got out after scoring only 12 and 13 runs.

Gujarat captain Hardik, playing the captaincy innings, scored a half-century for his team in the second consecutive match, and played brilliant innings of 87 runs in 52 balls with the help of 8 fours and four sixes, and took his team to a respectable score.

Abhinav Manohar, who made his IPL debut this year, also played a good innings

Abhinav Manohar, who made his IPL debut with the Gujarat Titan team in the Indian Premier League this year, also played a brilliant inning of 45 runs in 28 balls, batting well for his team. And in this, he also hit 4 fours and 2 sixes.

And this is his second consecutive innings in which he has scored 30 plus runs with a good run rate and has been instrumental in helping his team win.

After a long time, David Miller played a stormy inning for his team, scoring 31 runs in 14 balls with the help of 5 fours and a six, due to which his team reached a respectable score of 192.

Rajasthan Royals captain Sanju Samson was run out at the hands of Hardik Pandya after scoring 11 runs in just 11 balls, and in this big run chase, he left his team in the middle. Because before his dismissal, his best batsman Jos Buttler became a victim of Lockie Ferguson.

Rajasthan’s opener batsman Jos Buttler again played a stormy inning, playing a brilliant inning of 54 runs in 24 balls for his team, in which he hit 8 fours and 3 sixes, and was caught by Lockie Ferguson after seeing his team getting off to a good start.

From Gujarat’s debut turn bowler Yash Dayal to Lockie Ferguson, performing well with his bowling played an important role in winning his team, and where Ferguson took 3 for 23 runs in 4 overs, Yash Dayal also took 2 wickets for 40 runs.
Apart from this, Mohammed Shami also performed well, taking one wicket for 39 runs in 4 overs.

Yash Dayal, who played his first IPL debut match with the Gujarat team, was playing the IPL debut match today, in which he displayed good bowling, taking two wickets for 40 runs in 4 overs, in which one of his early wickets was Rajasthan’s opener batsman Devdutt Padikkal.