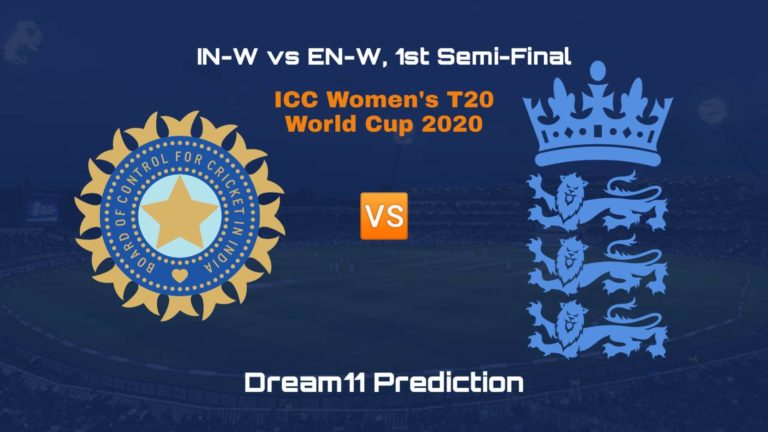 India Women were the first to qualify in the semi-finals of ICC Women’s T20I World Cup 2020 and are in dominant form, winning all the four encounters in league stages. They defeated Sri Lanka Women by 7 wickets in the last match.

Bowling first, Spin duo of Radha Yadav and Gayakwad bowled exceedingly well taking six scalps among them with four of them belonging to Radha. Othe bowlers also supported them and thus restricted Sri Lanka Women on just 113 runs. Chasing the target, Shafali Verma played another attacking knock of 47 runs from just 34 balls to chase the target comfortably. They will be keen to continue the winning momentum and defeat England Women to enter the finale of ICC Women’s T20 World Cup 2020.

They won three of their four encounters in the league stage and are a strong and well-balanced team. Apart from their loss against South Africa in the first match, They have been clinical in the other three coming out on top with a margin of 98,42 and 46 runs respectively. In the last match, They defeated West Indies Women comprehensively.

Batting first, Danielle Wyatt scored 29 runs while Sciver played an outstanding knock of 57 runs. A late cameo of 23 runs from just 13 balls by Amy Jones surged England Women to a total of 143. They were clinical with the ball too restricting Windies Women at just 97 runs. Sophie Ecclestone spun her web to take three wicket-haul while Sarah Glenn struck twice to knock out the defending champions. A similar unison effort will be required from all players to defeat an in-form Indian team and qualify for the final encounter.

A neutral pitch can be expected with support to batsmen as well as bowlers. Spinners can fancy the conditions while Batsmen can also play good knocks for the team.

There are high chances of rain to tinker match proceedings.

Smriti Mandhana:
Star batsmen Mandhana is in excellent form from the past few matches and performed well in tri-series and warm-up matches. She scored 17 runs in the last match.

Deepti Sharma:
Spin all-rounder Deepti will be a must-pick in your Dream11 team because of her consistent form. She scored 49 runs in the first match and will also bowl her quota of overs. In the last match, She scored 15* runs along with taking one scalp.

Shafali Verma:
15-year old Shafali has made a mark in international cricket. She scored 29, 39, 46 and 47 runs in four matches with an attacking strike rate. She is in brilliant form and is third on the list of top scorers in the tournament.

Harmanpreet Kaur:
Skipper Harmanpreet is not in her best form presently but can change the course of match single-handedly. She can also bowl a few overs of spin if required. Kaur scored 15 runs in the last match.

Jemimah Rodrigues:
She is a talented youngster and scored 29, 34 and 15* runs in the three T20I’s and will be the key in the middle order.

Poonam Yadav:
She is one of the best spinners in women’s cricket and always takes plenty of wickets. Yadav took four and three wicket-haul against Australians and Bangladesh, respectively.

Radha Yadav:
Left-arm orthodox bowler Radha was at her best in the last match taking four wicket-haul and can be a good pick in EN-W vs IN-W Dream11 team.

Shikha Pandey:
Pacer Shikha will lead the Indian pace attack and has taken seven scalps till now. She can also score a few runs with the bat.

Rajeshwari Gayakwad:
She was the highest wicket-taker in the tri-series against Australia and England and is a wicket-taking spinner. Gayakwad took two scalps in the last match.

Natalie Sciver:
All-rounder Sciver is leading the batting attack of England and is the top scorer of the tournament with 202 runs in four matches. She will also bowl a few overs of medium-pace and will be the best choice for captaincy.

Heather Knight:
Skipper Knight is a better player of spin compared to her teammates and has scored 194 runs till now. She can also bowl a few overs of spin if required and will be a must-pick in any fantasy team.

Danielle Wyatt:
Opener Wyatt is one of the best women batsmen and generally remains in form. However, Her recent outings have not been as per her level and will be eager to put a match-winning performance tomorrow.

Amy Jones:
Wicket-keeper batsmen Amy Jones is a talented player and has the ability to play big knocks for her team. However, Her batting position is not fixed and can be demoted also like the last match where she scored 23* runs down the order.

Katherine Brunt:
Pace all-rounder Brunt bats in an attacking manner and is a reliable pacer. She will be the best choice for captaincy in grand leagues.

Sophie Ecclestone:
Leg-spinner Ecclestone is in good form and has taken eight scalps till now including three-for in the last match. She will fancy the pitch conditions alike Indian spinners.

Anya Shrubsole:
Pacer Shrubsole is also in lethal form and has taken similar eight wickets and also has a good record against the Indian team.

Sarah Glenn:
Spinner Glenn is a young talent and has been good in the tournament taking six scalps till now. She can be a differential pick in EN-W vs IN-W Dream11 team.