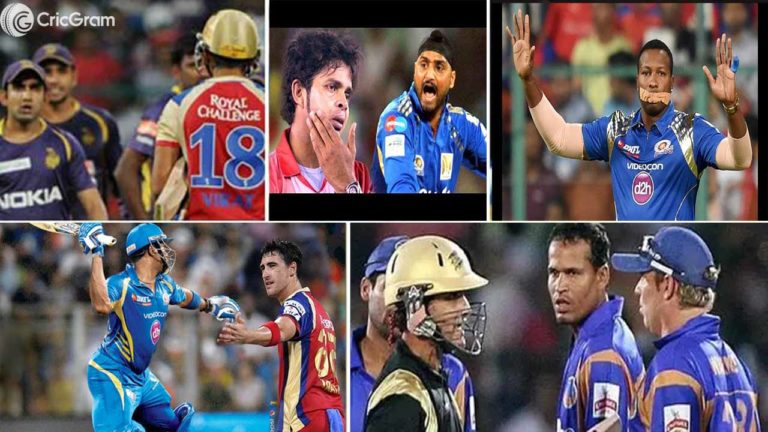 IPL most famous controversies: If you also follow cricket and IPL T20 league, then you must have seen a dispute between two players in some IPL match. And there have been many such occasions in the IPL where many players had clashed with each other, so let’s take a look at the top 5 most famous controversies between two players in IPL history, and whose controversies made a lot of media headlines. So let’s know about those cricketers who made themselves famous because of the fight.

So let’s know about some five such controversies in the entire IPL history till date, which are very famous among the IPL audience till date.

The first controversy in this list is the feud between Harbhajan and Sreesanth in IPL Season 1, in which Harbhajan slapped Sreesanth. And due to this, he was banned from the match of that entire IPL season as well as he was also banned from some international cricket matches. And Harbhajan had to pay the price of this slap by losing more than 3 crores.
And this was the first such case in the entire IPL history when a cricketer slapped his other cricketer partner.

And apart from that, On May 16, 2013, during IPL 6, Delhi Police arrested Sreesanth and two other players of the Rajasthan Royals team, Ajit Chandila and Ankit Chavan from Mumbai on charges of spot-fixing. And after that Sreesanth was banned for lifetime cricket, and since then he is facing a cricket ban. By the way, now the lifetime cricket ban has been lifted from him.

The second controversy is between Mitchell Starc and Kiran Pollard when in the seventh season of IPL when Pollard ran toward Starc to beat him with a bat.
In fact, when Pollard was batting in that match, on the fourth ball of Starc, he departed slightly from the cricket pitch, but still, Starc threw the ball towards him, and after that Pollard ran to hit Starc with a bat. However, the matter was pacified by the umpire present there.

However, no one was hurt in either of them. After the match, 75% of Pollard’s fees and 50% of Starc’s fees were deducted as fines.

The third controversy in this list is between Shane Watson and Pollard, when Watson came to bat during a match of IPL season 6, Pollard started teasing him by imitating him, and after that, both of them commented on each other with indecent words. However, this matter was also handled later by the umpire present there and the captains of both the teams.

At the same time, the fourth controversy in this list is between Virat Kohli and Gautam Gambhir, which even today remains a topic of much discussion among the cricket audience.
In fact, during an IPL match in the year 2013, there was a fierce debate on the field between RCB captain Virat Kohli and Kolkata Knight Riders captain Gautam Gambhir. And a lot of abusive languages was also used in this debate.

And the main reason behind this debate was when Virat Kohli hits two consecutive sixes in the two balls of KKR’s bowler Pradeep Sangwan, and after that when he was out in his third ball, then when he got out towards the cricket pavilion, then KKR’s Captain teasing him.

And After the match, 50% of Virat Kohli’s fees and 50% of Gambhir’s fees were deducted as fines.

The fifth most famous controversy on this list is between Shane Warne and Sourav Ganguly when Sourav Ganguly was out by Graeme Smith in a match of the 2008 IPL season, then Ganguly felt that the catch was not caught and asked the umpire to take a review by forcefully. After this, the third umpire gave the decision in favor of Sourav Ganguly, after which a heated dispute started between Rajasthan Royal captain Shane Warne and Ganguly.

West Indies star batsman Kiran Pollard has been involved in controversy many times in IPL not only with the bowler but also with the umpires. So let’s know about some of the controversies between the umpire and Pollard.

Top 10 batsmen with most sixes in IPL history