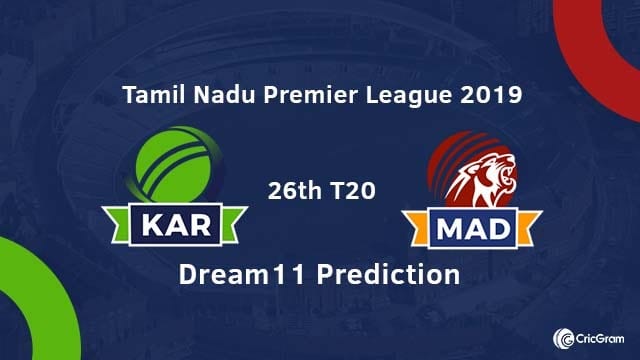 Karaikudi Kaalai and Madurai Panthers will face-off in the 26th encounter of Tamil Nadu Premier League 2019 at Tirunelveli. We will provide KAR vs MAD Dream11 Team Prediction, Preview and Probable Playing XI for the match.

Karaikudi Kaalai is on the bottom end of the points table with one win and five losses. They lost their last match to Lyca Kovai Kings by 15 runs. Bowling first, R Rajkumar took two scalps and was supported by other bowlers to restrict Kings at 154. In the chase, Srikkanth Anirudha, Maan Bafna, and S Ganesh failed after getting a start while M Shajahan scored 41* runs in 23 balls but were ultimately left behind by 15 runs. They will hope to end their disappointing run in TNPL 2019 on a good note defeating Madurai Panthers in their last encounter.

Madurai Panthers are third on the points table with four wins and two losses. They won their last match against Chepauk Super Gillies by 33 runs. Batting first, Arun Karthik and Shijit Chandran scored good knocks of 39 runs each while Nilesh Subramanian scored late cameo of 31 runs in 15 balls to take the team to a total of 172. In defense, Pace duo of Abhishek Tanwar and Kiran Akash starred with the ball taking three wickets each to ensure a comfortable victory for the team. They will be eager to put similar unison effort against Karaikudi Kaalai and seal their place in the semi-finals.

Pitch will be neutral, providing equal support to batsmen as well as bowlers. On this surface 1st innings expected score is 160-170 runs.

Skipper S Anirudha will lead the batting unit for his team from the front. He scored 58 runs and 98 runs in two matches. He will also not handle the wicket-keeping duties.

N Subramanian will also bat way down the order and is an average performer. He scored attacking 31 runs in the last match.

If playing, Dinesh Karthik will bat at one down for Karaikudi Kaalai and is one of the best players of TNPL.

Skipper S Chandran is a good and technically reliable batsman. He scored 39 runs in two encounters including the last match.

Sarath Raj A has got attacking start in most of the matches, but He failed to convert into a significant total till now.

L Suryaprakash will open for Karaikudi Kaalai and is a skilled batsman. He scored 31 runs in second last match.

M Shajahan is a good finisher and can do quick-hitting for his team. He scored attacking 41 runs in 23 balls in the last match and also took one scalp.

R Srinivasan is a technically strong batsman will bat in the middle-order. Srinivasan scored 37* and 21 runs in two matches but failed in rest encounters.

S Ganesh can handle the wicket-keeping duties for Kaalai. He scored 20 runs in the last match.

J Kousik is a handy all-rounder and can contribute to both the departments. J Kousik took four scalps and scored 35* and 43* runs in last three matches.

Abhishek Tanwar is a brilliant pace bowler and can play attacking cameos with the bat. He took three-wicket haul in the last match.

R Rajkumar can bat at a quick rate in death overs and can also bowl his quota of overs effectively. He scored 13 runs and took two wickets in the previous match.

Maan Bafna is a talented all-rounder and can be effective with the bat as well as the ball. He has not performed as per his talent till now in six matches. He scored 21 runs in the last game.

Kiran Akash bowled exceedingly well in four encounters taking ten scalps till now in TNPL’2019. He is a wicket-taking pacer and took three-wicket haul in the last match.

Rahil Shah is a brilliant spinner and proved his talent in two matches taking three and two scalps. He bowled good spell in the last game.

Sunil Sam took seven scalps in six matches and can also be handy with the bat.

RD Ashwin Kumar can be handy with bat and can also bowl good overs of medium-pace. He scored attacking 30 in second last match and took one scalp in the previous game.

Other Options: Yo Mahesh

Yo Mahesh is an experienced all-rounder and can be vital in both the departments.

If you liked Karaikudi Kaalai vs Madurai Panthers Dream11 Prediction, then follow us on Twitter for the latest cricket news and playing XI.