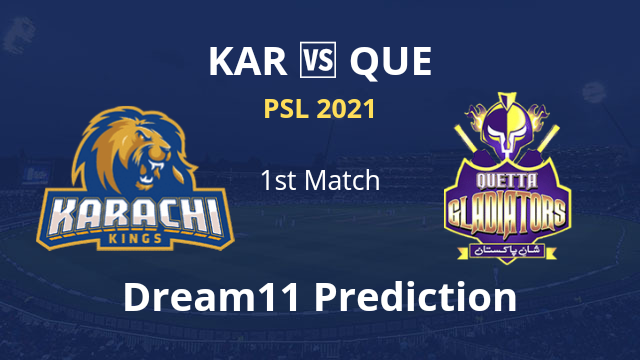 The 1st match of the Pakistan Super League 2021 will be played between Karachi Kings and Quetta Gladiators on February 20th at National Stadium in Karachi. We will cover KAR vs QUE Dream11 Prediction, match preview, and Fantasy Cricket Tips.

Karachi Kings come into this new Pakistani Super League campaign determined to defend their crown after winning their first-ever PSL trophy in the COVID-disrupted 2020 edition where they managed to win the trophy despite the death of their head coach Dean Jones during the break-in play.

They will be led by Imad Wasim and they can boast some key local players such as Babar Azam and Mohammad Amir but they have seen two key departures as Iftikhar Ahmed and Mohammad Rizwan have both left the club which weakens them somewhat.

Quetta Gladiators come off a hugely disappointing campaign last year where they failed to make the knockout phase so the 2019 champions will be desperate to bounce back this time around and go deep in the tournament.

There is no Jason Roy nor the retired Shane Watson this time around but they have recruited big-hitting Chris Gayle and Tom Banton to lead their batting with Cameron Delport, Azam Khan, Ben Cutting, and skipper Sarfaraz Ahmed.

The bowling attack has a formidable look about it with Mohammad Hasnain and Naseem Shah now supported by Dale Steyn, Qais Ahmad, and Usman Shinwari which looks to be one of the strongest in the tournament.

The pitch is one that will favor the batsmen. The batsmen will get complete value for their shots on this pitch and they can cash in and score some big runs if they can settle down. The bowlers will have to bend their backs if they have to get wickets on this surface.

Babar Azam was the leading run-scorer of the competition in the last edition. He scored 473 runs at an average of nearly 60 and a strike rate of over 120.

Chris Gayle will expect to light up the PSL with his power-hitting. The Universe Boss has scored over 13500 runs in T20 cricket at an average of nearly 40. His presence will certainly boost the Gladiators.

Daniel Christian is coming into this competition on the back of a splendid Big Bash League season. He scored 272 runs and also picked up 15 wickets while playing for Sydney Sixers.

Having called curtains to his international career, Mohammad Amir will now dedicate his focus to PSL. He picked up 10 wickets in the last edition and had an economy rate of under 8 runs per over.

Cameron Delport also had a fairly satisfactory season with the bat last time around, having scored 178 runs at an average of over 20. He has enjoyed much success in this competition.