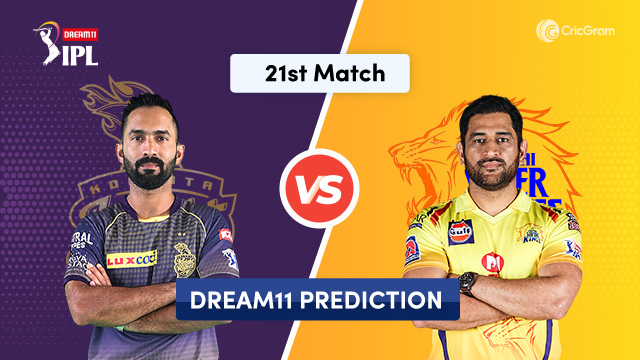 Kolkata Knight Riders have performed decently so far as they are currently at the 4th position on the points table with 2 wins and 2 losses and a total of 4 points.

Knight Riders is one of the strongest teams in IPL and has many match-winning players, but they haven’t been able to perform at the right time. Their main drawback has been their batting order as they are changing the order every match.

Sunil Narine hasn’t been as effective at the top as he was in the past seasons. Dinesh Karthik is also looking out of form, and he put pressure on the team in the last match by promoting himself and Pat Cummins up the order rather than Morgan and Tripathi, who smashed the bowlers and almost won the match for the team.

Bowling is looking good with Pat Cummins back in form after the first match; Shivam Mavi and Nagarkoti also have been hitting the good lengths. Varun Chakravarthy has also been picking up wickets consistently, and Andre Russell has been bowling brilliantly at the death overs and picking up wickets.

There have been many rumors about shifting the captaincy to Eoin Morgan as Dinesh Karthik hasn’t made good decisions on the field.

After three consecutive losses, CSK made a good come back by winning the last match against KXIP by 10 wickets. They are currently at the 6th position on the points table with 2 wins and 3 losses, and 4 points.

Shane Watson looks back in form after 4 matches as he scored unbeaten 83 runs from just 53 balls, and Faf du Plessis has continued his superb form scoring 87* runs from 53 balls. The main concern for Super Kings will be their middle order as Jadhav and Dhoni are unable to hit the big shots.

Super King’s bowlers have also struggled in this season as they haven’t been able to pick up wickets in the power play, and they don’t have any fast bowler who can bowl over 140+ speed. They have a lot of batting depth, but with Sam Curran hitting some big sixes, we all know what Bravo is capable of batting.

If Shardul Thakur and Deepak Chahar bowl well and start picking up wickets in the power play, it will be tough to stop the Super Kings from winning the matches.

Average 1st Innings Score: 167 (From 6 games played at this venue so far in this season)

Average 2nd Innings Score: 151 (From 6 matches played at this venue so far in this season)

The pitch here is a balanced one between bat and ball. But batsmen will get more advantage than bowlers.

Three out of the six matches have been won by the team batting first so far this season.

He is a young right-handed batsman and has the talent of playing big innings. S Gill opens the innings and batted decently, scoring 28 runs in the last match.

He is an allrounder and is equally good with both bat and ball. In the last match, he scored 13 runs and picked up 2 wickets. A Russell is a perfect Captain choice in KKR vs CSK Dream11 Team.

He is a left-handed batsman and generally bats at NO.3. Rana batted well, scoring 58 runs from 35 balls in the last match.

He is a right-arm off-spin bowler and is good at controlling the flow of runs and consistently picks up wickets. Sunil Narine opens the innings for KKR and scored 3 runs and was very expensive and went wicketless in the last match. He has looked out of form in this season

He is a left-handed batsman and provides stability in the middle order. In the last match, Morgan batted extraordinarily, scoring 44 runs from just 18 balls.

He is a young right-arm fast bowler and bowls at a perfect pace. Mavi was expensive and also went wicketless in the last match.

He is a young right-arm fast bowler and can also hit some big shots down the order and is also a brilliant fielder. Nagarkoti was expensive but managed to pick up 1 wicket in the last match.

He is a right-arm leg-break bowler and was expensive in the last match but managed to pick up 1 wicket.

He is a right-handed batsman and can play big shots at any batting position. In the last match, Tripathi batted brilliantly, scoring 36 runs from just 14 balls.

He is a right-handed batsman and an excellent striker of the ball. Faf has been opening from the past few matches and batted brilliantly in the last match scoring 87* runs from just 53 balls.

Shane Watson is a dangerous player for any opponent as he can turn the game towards his side on the back of his brilliant batting skills. He batted superbly, scoring 83* runs from just 53 balls in the last match.

He is a decent striker of the ball and plays according to the situation of the match. Rayudu did not get to bat in the last match.

He is one of the top allrounders in India. R Jadeja can hit some big sixes down the order and pick up a few wickets with his spin bowling. He bowled well, picking up 1 wicket in the last match.

He is death over specialist bowler. Dwayne Bravo didn’t take any wicket in Dream11 IPL 2020 but He have ability to change the game result. Bravo is very good to pick in KKR vs CSK Dream11 Team.

He is an allrounder and is equally good with both bat and ball. Curran was a little expensive in the last match.

He is a right-arm fast bowler and is good at controlling the flow of runs. Deepak Chahar can also be handy with the bat when required. He bowled well but went wicketless in the last match.

Dhoni is one of the best captains and finishers in the world. If he gets in the mood, then he can cause havoc in the death overs. Dhoni did not get to bat in the last match.

He is one of the experienced players in IPL and is a consistent wicket-taker. Chawla was expensive in the last match but managed to pick up 1 wicket.