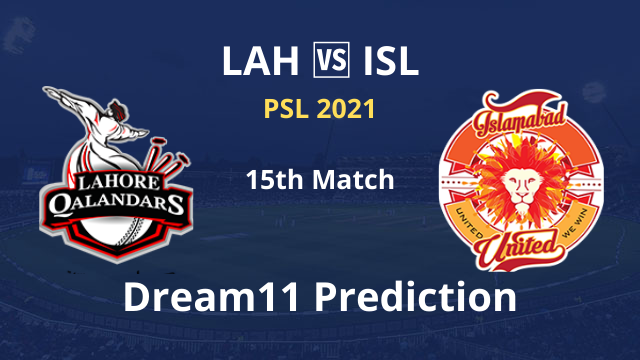 Lahore Qalandars and Islamabad United will play against each other in the 15th match of the Pakistan Super League 2021 at Sheikh Zayed Stadium, Abu Dhabi.

Qalandars have performed well so far as they have won three out of the four matches and are currently at the 4th position on the points table with 6 points. In the last game, they performed brilliantly and won the game by six wickets.

The opening batsman Fakhar Zaman has been batting well this season and played a brilliant knock in the last match. His partner Sohail Akthar is the team captain who has been struggling to score runs and was out for a duck in the previous game.

Mohammad Hafeez has been changing his batting order according to the requirement of the team and has been consistently scoring runs. Callum Ferguson is a good replacement for Joe Denly as he scores run consistently. Ben Dunk is an experienced player in the middle-order and plays a crucial role in the finishing duties of the innings.

The bowling department has also been doing a decent job so far this season. Shaheen Afridi has been the consistent wicket-taker but was expensive in the last match. Haris Rauf and Daniyal managed to pick up one wicket each in the previous game. The return of Rashid Khan and also the availability of James Faulkner make the team even stronger.

Lahore Qalandars would want to continue their winning momentum and try to get back on the top of the points table.

Islamabad United has also performed well so far as they have won three out of the four matches and are currently at the 3rd position on the points table with 6 points. In the last game, they performed well and won the game by six wickets.

With Alex Hales and Stirling not in the team, it is most likely that Usman Khawaja and Colin Munro would be the new openers. Skipper Shadab Khan played at No.3 but changed his batting position as he struggled to score runs and started playing in the middle-order.

The young wicket-keeper Rohail Nazir batted well in the last match at No.3. Asif Ali has been batting well and providing good finishes for the team in most of the games. Hussain Talat and Iftikhar Ahmed have also played a couple of good knocks in the middle-order.

In the bowling department, Hasan Ali has been the critical wicket-taker of the team, and Faheem Ashraf has bowled well, picking up wickets at crucial times. Shadab Khan managed to pick up a wicket in the last match.

Islamabad United would want to defeat the Qalandars and try to move up on the points table.

The pitch here is a little slow, but the batsmen might have an advantage as it is the first match to be played here. Moreover, the dew factor will play a crucial role and make things more challenging for the bowlers. We can expect a score around 160-170 runs.

(The chasing team has won twenty-five out of the forty-seven games played at this venue.)

Hafeez is the most experienced player on the side and generally bats at No.3. He scored 15 runs in the last match.

He is a left-handed batsman and opens the innings for the Qalandars. Fakhar batted brilliantly in the last match scoring 83 runs from 54 balls.

He is one of the top fast bowlers in Pakistan and is just 20 years old. Shaheen bowled very well, picking up three wickets in the last match.

Rashid Khan is currently the best leg-spinner in the world. Last time he had to leave PSL due to National duties, but now he is available for the rest of the season.

He is a right-arm fast bowler and bowls consistently at more than 140kmph. Rauf bowled well in the last match, picking up one wicket.

He is a right-handed batsman and is a well-known name in the BBL. Ferguson will be making a debut in the PSL this season.

He is an all-rounder but has been performing mainly with the ball recently. James Faulkner hasn’t played any match this season.

Ben Dunk is the wicket-keeper and also a critical middle-order batsman. He batted brilliantly, scoring 57* runs and took his team over the finishing line.

Skipper Shadab Khan is just 22 years old and is an all-rounder. He has appeared to be struggling with his performance so far this season.

He is a left-handed batsman and generally does the role of an opener. Usman will be making his debut this season.

He is a right-arm fast bowler and has been in red hot form recently. Ali bowled well, picking up two wickets in the last match.

(Yet to play in this season)

Munro is a left-handed batsman and can open the innings or play at No.3, depending on team requirements. He will be playing the first match of the season.

He is equally good with both bat and ball. Faheem picked up three wickets for just 11 runs in the last match.

He is just 19 years old and the wicket-keeper batsman of the team. Nazir played his first match of the season and scored 34 runs.

He is a left-handed batsman and can also bowl a few overs of medium pace if required. Talat scored one run in the last match.

He is a right-handed middle-order batsman. Asif scored 16* runs in the last match.

This match is looking risky on Dream11 so try to play only GLs.