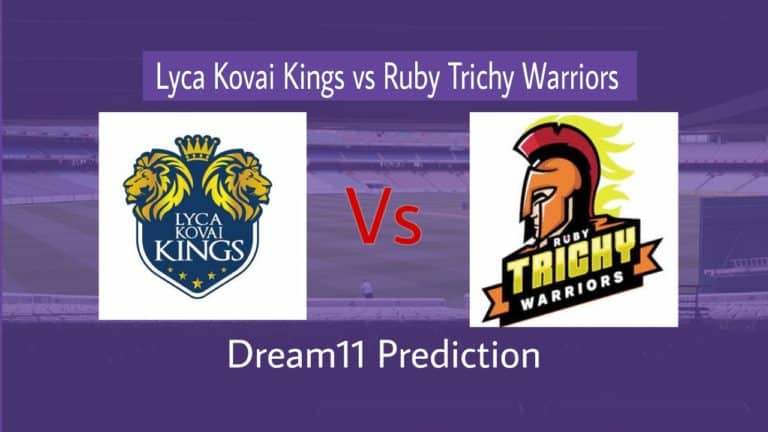 Lyca Kovai Kings and Ruby Trichy Warriors will face-off in the 11th match of Tamil Nadu Premier League 2019 at Tirunelveli. We will provide LYC vs RUB Dream11 Team Prediction, Preview and Probable Playing XI for the game.

Team Lyca Kovai Kings are fourth on the points table with one win and one loss. They lost their last match to Tuti Patriots by 6-runs in a 13-over game. Bowling first, Antony Dhas took three wicket-haul while K Vignesh took two scalps in an otherwise poor bowling effort to restrict Patriots at 155. In the chase, Antony Dhas played attacking knock of 63 runs in 26 balls. Akkil Srinath supported him but was ultimately left behind by 6-runs.
They will hope for a unison effort from all players tomorrow to defeat Warriors.

Ruby Trichy Warriors are on the bottom of the points table with two losses. They lost their last match due to another poor performance from their batsmen. Bowling first, Saravan Kumar took two scalps and was supported by other bowlers to restrict Chepauk at 148. In the chase, Warriors collapsed miserably and could only score 107 runs. A Barooah scored 29 while Saravan Kumar scored 22* were the only positives from batting department. They will hope to give a tough challenge to mighty Kovai Kings and expect a responsible effort from their batsmen.

Lyca Kovai Kings and Ruby Trichy Warriors match is expected to be good.

N Mohammed Ashik will bat at two down and can play at an attacking strike rate. He scored 19 runs in the last match.

K Mani Bharathi will bat in lower middle-order and will get less chance to bat as compared to Ashik.

Skipper Abhinav Mukund is an experienced campaigner and will be the essential batsmen for Kings. He scored 70* runs from 44 balls in the first encounter but failed in the last match.

Shahrukh Khan is also a brilliant player and will do the majority of scoring for his team. He scored 325 runs in TNPL’18 and continued his form scoring 40 runs in the opening match. He also failed in the last game.

B Anirudh Sita Ram is a technically strong batsman and will be eager to perform well for his new side. He has failed to make a mark in two matches.

Saravan Kumar is a bowling all-rounder, but Dream11 added him in batting category. He took three scalps in the last match.

S Aravind got attacking start including two sixes in the first match but failed in the second match. He will be eager to score big tomorrow.

Aditya Barooah will open for Rubi Warriors and can be a good pick in RUB vs CHE Dream11 team. He scored 29 in the last match.

Murali Vijay is a reliable batsman and can anchor the innings to play a big knock. He scored 81 runs in the first match. Vijay can also bowl a few overs of off-spin on spin-friendly pitches of TNPL. He may play tomorrow.

Akkil Srinaath will bat in the middle order for Kings, and He is a technically strong batsman.

M Raghav scored 22 runs in 18 balls in the first match. He will look at two down and can be a good credit saver also.

A Dhas is a good pacer and can do some late hitting for his team. He scored 63 and took three scalps in the last encounter.

Chandrasekar Ganapathy scored 21 runs in the first match. He has also played for CSK and has ample of experience. He may bowl a few overs.

M Rangarajan has enough potential with bat and bowl. He has played for Tamil Nadu team also. He failed to perform in both the matches. Rangarajan is good to pick for Fantasy Cricket Team.

L Vignesh will lead the pace attack for Warriors and can also do late hitting duty.

Bowlers for RUB vs LYC Dream11:

Skipper R Sai Kishore will lead the spin attack of Warriors and can also be handy with the bat. He took one scalp in the last match.

T Natarajan is a lethal pacer and took two scalps in the first encounter. He will spearhead the pace attack for Kovai Kings.

S Manigandan is a brilliant leg-spinner and gave a glimpse of his talent, taking three wicket-haul in their opening encounter.

K Vignesh also took eleven scalps in last season and is a good pacer of Kovai Kings. He bowled well in both the matches and has made three scalps till now.

Spinner Kannan-Vignesh bowled well in the last match and will be eager to put a good show tomorrow for Ruby Warriors.

Pacer M Poiyamozhi bowled well in the last match and took one scalp.

J Srinivas will support the pace attack for Kovai Kings. He can slightly risky.

Ganapathy Chandrasekar is also good allrounder, but He failed to perform this year. He can be a good pick for Grand Leagues.

If you liked Lyca Kovai Kings vs Ruby Trichy Warriors Dream11 Prediction, Then follow us on Twitter for Dream11 Team and Fantasy Cricket Tips.