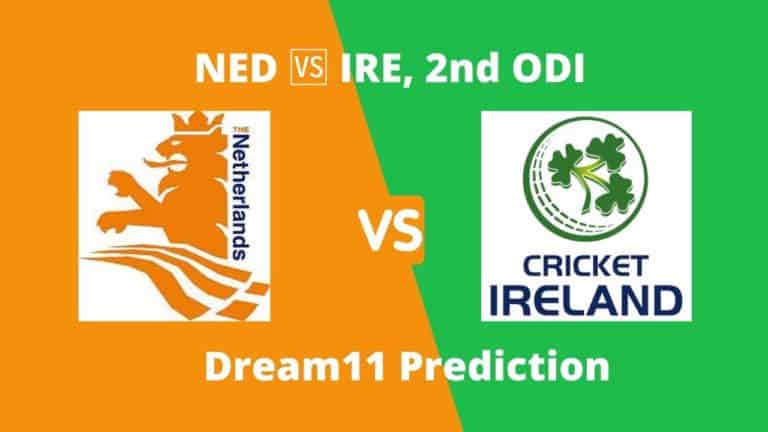 Netherlands and Ireland will play in the 2nd ODI at Sportpark Maarschalkerweerd, Utrecht. We will cover NED vs IRE 2nd ODI Dream11 Prediction, Probable Playing XI, and Fantasy Cricket Tips.

The Netherlands made history in the first match of the series as they won the game against Ireland after 14 years. They performed well and won the thrilling game by just one run.

Stephan Myburgh and Max ODowd opened the innings for the team and gave a decent start. But after that, Ben Cooper, at No.3, got out early without scoring much.

Bas de Leede tried to stabilize the innings in the middle-order, but he did not get enough support from other batters. Skipper Seelaar and Scott Edward got out in quick sessions. Saqib Zulfiqar and Logan van Beek batted well in the lower middle-order and added some crucial runs. In the end, Timm van der Gugten batted brilliantly but missed his fifty by just one run.

They would be hoping to perform better in the second match and try to win the series.

Ireland had to face disappointment in the first match of the series, and they would be distraught with themselves as they lost the game by just one run. The bowlers did a fantastic job, but the batsmen failed to perform to their standards.

William Porterfield got out early in the innings, but his partner Paul Stirling batted well, scoring a fifty, and held the innings from one end. Like Andy Balbirnie, Harry Tector, Dockrell, and Lorcan Tucker, all the other players fell early without scoring much.

Simi Singh scored 45 runs in the lower middle-order, and Andy McBrnie’s 17 runs gave hope that Ireland had a chance in the match, but they couldn’t make the team over the finishing line.

The bowlers were on point with their line and lengths and restricted the opposition from scoring runs by picking up wickets regularly. Craig Young and Joshua Little picked up three wickets each. Simi Singh and Andy McBrine picked up a wicket each.

They would want to keep the result of the first match behind them and focus on winning the second one and make a comeback in the series.

The pitch appears to be slow and favoring the bowlers very much. Batsmen have to struggle a lot to score runs. The bowlers will have a good advantage on pitches like this, and we can expect a low-scoring game similar to the previous match.

The weather will be cloudy, and there is a chance of during the match, so there might be a reduction in overs.

He is a right-handed batsman and opens along with Myburgh and scored 23 runs.

Logan is equally good with bat and ball, scored 29 runs, picked up two wickets, and bowled a maiden over. He is a good choice for C and VC in your NED vs IRE Dream11 team.

He is the captain of the team and also an all-rounder. Seelaar was out for a duck but bowled brilliantly, picking up three wickets.

He is a right-arm medium-fast bowler and can also be handy with the bat. Gugten scored 49 runs and picked up a wicket, and also bowled three maiden overs.

Klaassen is a left-arm medium-fast bowler and bowls at a decent pace. He managed to pick up a wicket.

Bas de Leede is a right-handed middle-order batsman and can also bowl a few overs of medium pace. He scored 21 runs in the last match.

Myburgh is a left-handed batsman and opens the innings for the team. He scored 20 runs in the last match.

Stirling is a right-handed batsman, opens the team’s innings, and can also bowl a few overs of spin. He scored 69 runs and was the highest scorer of the match, and is a good pick as C or VC in your NED vs IRE Dream11 team.

Andy is the skipper of the team and bats at No.3. He scored only four runs in the last match.

He is a right-arm off-break bowler but also scores some runs. Andy scored 17 runs and picked up a wicket, and bowled a maiden over.

He is Right-arm medium bowler, B McCarthy didn’t take wicket in the previous game but he is good to pick in NED vs IRE 2nd ODI Dream11 team.

Joshua is a young left-arm fast bowler and consistent at picking up wickets. He bowled brilliantly, picking up three wickets in the last match.

He is a right-arm medium-fast bowler and bowled well in the last match, picking up three wickets.

Simi Singh is an all-rounder and bats in the lower-middle order. He scored 45 runs and picked up a wicket, and also bowled three maiden overs.

He is a left-handed batsman and one of the experienced players on the team. William scored only five runs in the last match.