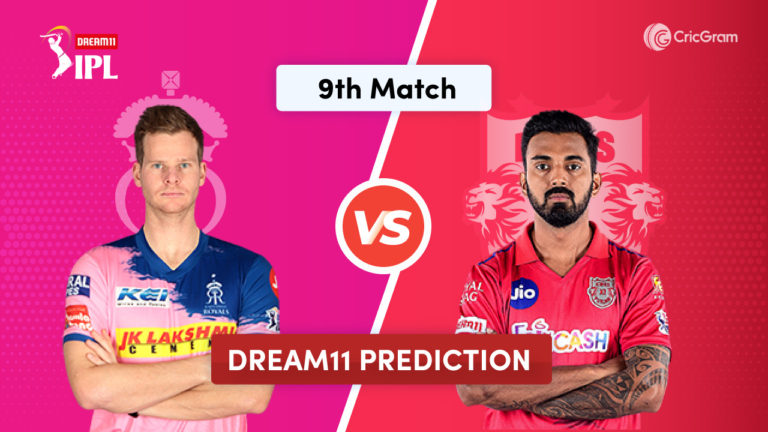 Kings XI after the disappointment in the 1st match has made a very good comeback as they won the match against RCB by a huge margin of 97 runs. They were put to bat first and had a good start as they scored 50 runs in the powerplay without losing any wickets.

Mayank Agarwal after scoring 26 runs got out in the 7th over. Nicholas Pooran 17 runs and Karun Nair 15* runs played decent innings. But the star of the match was KL Rahul who batted extraordinarily scoring 132* runs from just 69 balls and as a result, they posted a huge total of 206 runs.

With 206 runs to defend, KXIP had a great start 3 wickets in three overs for just 4 runs and were in full control of the game. They never allowed the opposition to score runs freely and picked up wickets at regular intervals and as a result, got the opposition all-out for just 109 runs.

The youngster Ravi Bishnoi and Murugan Ashwin were brilliant with the ball as they picked up 3 wickets each.

Rajasthan Royals had a great start to the season as they won their 1st match against CSK by 16 runs. They were put to bat first and had a little shaky start as they lost the wicket of Jaiswal for 6 runs. But after that, there was destruction from Sanju Samson and Steve Smith.

With 216 runs to defend, Royals gave away 53 runs in the power play and did not pick up any wicket. After that, they bowled brilliantly picking up 4 wickets for just 21 runs in quick session and made a comeback into the match.

In the end, they gave away a lot of runs but as they posted a huge total they were able to defend it. Rahul Tewatia bowled brilliantly picking up 3 wickets of important players.

Average 1st Innings Score: 216 (From 1 match played at this venue so far in this season)

Average 2nd Innings Score: 200 (From 1 match played at this venue so far in this season)

The pitch here is very good for batting as the ball nicely coms on to the bat and also the boundaries are very short. We already have seen a high scoring match at this venue this season. In this ground Sanju Samson scored 74 runs in 32 balls.

He opens the innings for RR and has appeared to be in great form in the T20 series against Pakistan. Butler did not play the 1st match as he was in quarantine. He is very good choice of Captain or Vice-captain in RR vs KXIP Dream11 Team.

He opens the innings for RR along with Butler and is a good striker of the ball. Samson batted brilliantly scoring 74 runs from just 32 balls in the last match.

He is a right-handed batsman and bats according to the situation of the match. Steve Smith batted well in the last match scoring 69 runs from 47 balls.

He is a right-arm fast bowler and can be handy with the bat down the order. In the last match, Jofra played brilliantly scoring 27 runs from just 8 balls and also picked up 1 wicket.

He is a bowling all-rounder who can be handy with the bat in the lower middle order. Tom scored 10 runs but was expensive with the ball and picked up 1 wicket.

He is a left-handed batsman and has impressed everyone with his domestic leagues and the U-19 World Cup performance. Jaiswal scored only 6 runs in the 1st match.

He is an all-rounder but mostly known for his bowling. Gopal was a little expensive in the last match but manage to pick up 1 wicket.

He is an all-rounder and equally good with both bat and ball. Tewatia bowled brilliantly in the last match picking up 3 wickets and scored 10 runs.

He is a left-arm medium-fast bowler and deceives the batsmen with his slower balls. Unadkat was very expensive and also went wicketless in the last match.

He is a young right-handed batsman who can play big shots down the order and also bowl a few overs of spin. Parag scored only 6 runs in the last match. He is good to pick in RR vs KXIP Grand League Dream11 Team.

Skipper Rahul opens the innings for the team. He can play the shots right from the start of the inning and has an IPL hundred to his name. Rahul played extraordinary scoring 132 runs from just 69 balls.

He is a decent striker of the ball and plays according to the situation of the match. Agarwal batted decently scoring 26 runs in the last match.

Shami is one of the experienced bowlers for KXIP. He bowls at a good pace and is good at controlling runs in the death overs. In the last match, he picked up 1 wicket for just 14 runs in his 3 overs.

He is a left-arm fast bowler and is known for his pace and bounce. Cottrell bowled well in the last match picking up 2 wickets for just 17 runs in his 3 overs.

He is a young right-arm leg break bowler and has impressed everyone with his performance. Bishnoi picked up 3 wickets for 32 runs in his four overs in the last match.

Maxwell is an all-rounder but is mostly known for his batting skills. He has a strike rate of over 160 in IPL, and if required, he can bowl a few overs of spin. In the last match, he scored only 5 runs and managed to pick up a wicket.

He is a right-arm leg-break bowler and bowled well in the last match picking up 3 wickets for 21 runs in his 3 overs.

He is the most destructive batsman in the history of IPL. Gayle did not play in the last match.