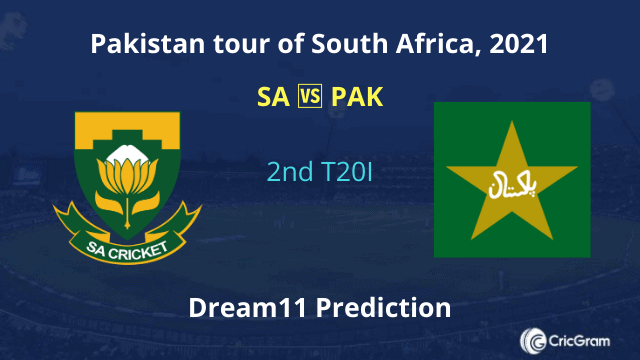 SA vs PAK Dream11 Prediction, Probable Playing XI, and Fantasy Cricket Tips. South Africa and Pakistan will play against each other in the 2nd T20I at Wanderers Stadium, Johannesburg.

South Africa had a hard time so far as they have lost the ODI series, and now they lost the first match of the T20I series. They put up a good performance with the bat but couldn’t do the same with the ball and, as a result, lost the match by four wickets.

Janneman Malan and Aiden Markram opened the innings for the team and gave a decent start. Malan got out after scoring decently, but Markram went on to score a brilliant fifty. At No.3, Wihan Lubbe got out early without disturbing the scoreboard.

In the middle-order, Heinrich Klassen is back to form and scored a half-century from just 28 balls and put up a good partnership with Pite van Biljon. The remaining batsman performed decently and helped in posting a good total.

The bowlers did a decent job in picking up wickets but at the same time leaked a lot of runs. Beuran Hendricks and Tabraiz Shamsi bowled very well, controlling the flow of runs, and picked up three and two wickets, respectively. All the other bowlers proved to be very expensive.

Some of the important players are missing from SA, but still, they have an excellent team and need to try a little harder to win the 2nd T20I.

Pakistan has been winning one match after the other and is not giving any chance of winning to the opposition. They put up an excellent performance in the last game and won the game comfortably by six wickets.

Mohammad Rizwan opened the innings and scored an unbeaten fifty to take his team over the line. Babar Azam opened along with Rizwan but got out early. Fakhar Zaman played a decent inning at No.3.

Mohammad Hafeez and Haider Ali played cameos but couldn’t stay longer on the crease. In the end, Faheem Ashraf batted brilliantly, scoring 30 runs from just 14 balls and made the job easy for Rizwan. The bowlers need to perform better in the next match as they cannot rely on the batsman in every game to do the job for them.

Pakistan will be high on confidence after winning the first match of the series and want to continue the same and win the next game.

The pitch here is neutral. The bowlers get a good amount of pace and bounce off the pitch. As the match progresses, the batting becomes more accessible and more effortless.

He is a right-handed batsman and also can bowl a few overs of spin. Markram batted brilliantly, scoring 51 runs from just 32 balls in the last match.

He is also a right-handed batsman and opens the innings along with Markram. In the last match, he batted decently, scoring 24 runs.

Skipper Klassen is the wicketkeeper-batsman and a good striker of the ball. He is back in form and smashed a fifty from just 28 balls.

He is a bowling all-rounder but is equally good with the bat. Phehlukwayo scored 9* runs but was expensive with the ball and went wicketless.

Pite van Biljon is a right-handed batsman and bats in the middle-order. He batted decently in the last match scoring 34 runs from 24 balls.

He is a left-arm medium-fast bowler and consistently picks up wickets. Hendricks bowled very well in the last match, picking up three wickets for 32 runs in his four overs.

Shamsi is a left-arm chinaman bowler. He bowled decently, picking up two wickets for 29 runs.

He is one of the best batsmen currently in the cricket world. In the last match, Babar scored only 14 runs.

He is the wicketkeeper-batsman of the team and is an outstanding striker of the ball. Rizwan is back in form and scored 74* runs and was also awarded Man of the Match.

Fakhar is a left-handed batsman and generally opens the innings for the team. He batted at No.3 in the last match and scored 27 runs.

He is an all-rounder and is the most experienced player on the team. Hafeez scored only 13 runs in the last match.

He is a right-arm fast bowler and bowls consistently over 140kmph. Rauf was very expensive in the last match but managed to pick up a wicket.

He is a young left-arm fast bowler and troubles the batsman with his pace and bounce. Shaheen was also expensive and managed to pick up a wicket.

He is a right-arm medium-fast bowler. Hasan Ali bowled well, picking up two wickets for 28 runs in his four overs.

He is a Right-arm leg-break bowler. Usman Qadir didn’t perform well in the previous match but He have wicket taking abilities.

He is a bowling all-rounder and can be very handy with the bat. Nawaz was out for a duck but bowled well, picking up two wickets.

Faheem is an all-rounder and is equally good with both bat and ball. He batted exceptionally well, scoring 30 runs from just 14 balls but went wicketless.

It is looking risky match on Dream11 so it is good to play on GL on Dream11.