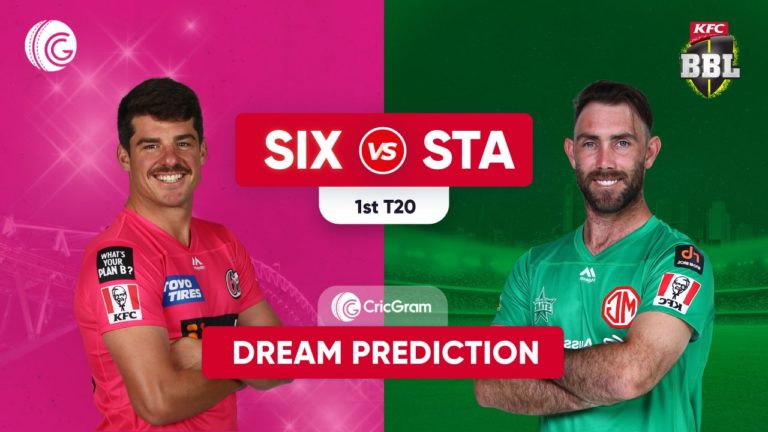 Sydney Sixers and Melbourne Stars will play in the 1st match of the Big Bash League 2021-22 at Sydney Cricket Ground, Sydney. We will cover SIX vs STA Dream11 Prediction, Probable Playing 11, and Fantasy Cricket Tips.

Sydney Sixers have been champions in two consecutive seasons and would be willing to make a hat-trick by winning again this time.

The batting all-rounder Moises Henriques will be leading the team and has appeared to be confident in winning the first match. Josh Philippe and James Vince are likely to open the innings for the Sixers, and Daniel Hughes might bat at No.3. and skipper Henriques and Jordan Silk will handle the middle-order.

Dan Christian will play the finisher’s role, and Steve O’Keefe and Ben Manenti are spinners of the team. Chris Jordan, Tom Curran, and M Edwards will form the pace trio and be lethal against any opposition.

Sydney Sixers have a balanced team, and they would be hoping to kick off the tournament with a win.

Melbourne Stars are yet to win a title in the Big Bash League. They finished as runner-up twice in ten seasons but couldn’t win the trophy.

The power hitter and batting all-rounder, Glenn Maxwell, is Melbourne Stars’ skipper. Joe Clarke and Marcus Stoinis would be opening the innings for the team, and the skipper Maxwell might play at the No.3 or 4 position. The middle-order comprises good players like Hilton Cartwright, Beau Webster.

The bowling unit consists of the star spin bowler Adam Zampa who can pick up wickets consistently. Sam Rainbird, B Couch and Sam Elliot will be fast bowlers.

Stars performed poorly in the last season, but they would want to forget that and focus on winning their maiden trophy this season.

(The average score is based on ten matches played at this venue.)

The pitch at Sydney Cricket Ground is good for batting, but it also provides help for the pacers.

(The team chasing won five out of the ten matches played at this venue.)

SIX vs STA Head to Head

Vince is likely to open the innings for the team and is a good player in the white-ball format. He scored 537 runs in the last season at a strike rate of 143.58.

Josh is the team’s wicketkeeper and opens the innings, and scored 508 runs at a strike rate of 150 in the previous season.

Henriques is the skipper of the team and is a batting all-rounder. He did not play much in the last season due to the National Duties.

Sean Abbott is a right-arm fast bowler and can also be handy with the bat. He played only four matches in the last season but managed to pick up seven wickets.

Tom Curran is a right-arm fast medium bowler and can play some big shots down the order. He picked up 42 wickets in the BBL.

He is a right-arm fast medium bowler. He can bowl in the death overs also.

Maxwell is the team captain and can do both bat and bowl. He scored 379 runs, picked seven wickets in the last season, and is a good pick as C or VC in the SIX vs STA Dream11 team.

Stoinis opens the innings for the team and can also bowl a few overs of medium pace. He scored 396 runs in the previous season.

Zampa is an experienced leg-break bowler and picks wickets consistently. He got 19 wickets in the last season with an economy of fewer than eight runs.

Joe Clarke is the wicketkeeper-batsman of the team and made his debut in BBL in the last season. He is yet to prove himself.