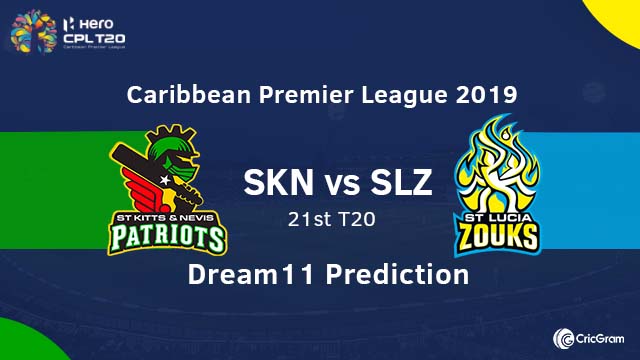 St Kitts and Nevis Patriots are third on the points table with four wins and four losses. They have a well-balanced squad containing attacking batsmen, good bunch of all-rounders and lethal pace bowlers. With just two more matches left before playoffs, They will hope to get some crucial points.

In the last match, They defeated Jamaica Tallawahs by 20 runs. Batting first, Mohammed Hafeez and Laurie Evans stabilized the innings after the early departure of openers and were limping on 82/4 after 12 overs. However, A blistering cameo of 62 runs from 27 balls by Fabian Allen led the team to a total of 176. With the ball, Pace trio of Cottrell-Joseph-Emrit took two scalps each to ensure victory by 20 runs for the team.

St Lucia Zouks are on the bottom end of the points table with only one win in six matches. Their batsmen have failed to perform consistently and support their bowlers who have put their best effort to restrict the opponent. Their last game was abandoned due to rain.

However, In the 12-overs of play, Zouks batsmen were able to score 99 runs. Openers Andre Fletcher and John Campbell failed to gave an excellent start to the team and lost their wicket cheaply. Same was the case with Colin De Grandhomme and Rakheem Cornwall. Star T20I batsmen Colin Ingram was the only positive for hosts scoring unbeaten knock of 52 runs just from 34 balls. They will be eager to put a unison effort tomorrow and defeat Patriots comprehensively.

Pitch will be neutral, providing excellent support to batsmen as well as bowlers.

Pitch will be more conducive to pacers. However, As the match will progress, spinners can also come into play due to the slowness of pitch.

However, Small boundaries can help batsmen in stroke-hitting.

Devon Thomas will open the innings and can play attacking knocks. His domestic form is also good and scored 62 and 71 runs in two matches but failed in rest encounters.

Evin Lewis is a destructive opener and will be essential batsmen for St Kitts and Nevis Patriots. He scored 36, 9, 53, 12, 65, 45 and 6 runs in seven encounters and is looking in attacking form.

Colin Ingram is a T20I specialist and has plenty of experience. He is a consistent performer with bat and scored 52* runs in the last match. He will be a must pick in SLZ vs SKN Dream11 team.

John Campbell is a good batsman and can anchor big innings. He scored 43, 0 and 6 runs in three encounters.

Darren Sammy will bat in the lower middle order and is a very attacking finisher. He is yet to play a good knock in CPL 2019. He can bowl a few overs of medium pace.

Shamarh Brooks played attacking 27, 34, 20 and 6 runs in four matches and is a consistent performer.

Rahkeem Cornwall is an attacking batsman and a competent spinner. He has scored 36, 33 and 75 runs in three matches from 14,12 and 30 balls respectively. He also took one scalp in second last match.

Colin De Grandhomme is a talented allrounder and can be useful with the bat as well as the ball. His recent form is also good and scored 25, 30, 28 and 17 runs in four matches. However, He is not bowling any overs.

M Hafeez will bat in the middle-order and can bowl a few overs of spin. He scored 14, 26, 7 and 37 runs in the last four matches. He also bowled good spell in last match taking one scalp.

Skipper Carlos Brathwaite failed miserably in all the encounters except the second last match where he took two scalps and scored 64 runs from just 30 balls.

Spin all-rounder Fabian Allen can be relied on with bat and ball. He scored attacking 30, 33, 37* and 62* runs in four encounters and also took two scalps in one match.

Sheldon Cottrell is an excellent pacer and can be lethal in initial overs. He took three wicket-haul in the first match and two scalps in the last game.

Rayad Emrit performed brilliantly in Canada T20 league and is a good all-rounder. He has taken nine scalps till now including two scalps in the last match and scored attacking 21* runs in second previous game.

Fawad Ahmed was leading wicket-taker of the last edition with 21 scalps and is a witty spinner. He has taken six scalps in five matches.

Hardus Viljoen has taken a plethora of wickets around the globe in various T20 leagues and can also be handy with the bat. He scored 28 and 31 runs in two matches.

Kesrick Williams is a terrific T20 bowler and has also played for Windies. He can also be handy with the bat. He took three wicket-haul in second last match.

Alzarri Joseph is a lethal pacer with good pace and bounce. He bowled good spells in the last two matches and got two scalps in the previous encounter. He can be a good pick in SKN vs SLZ fantasy team.

Spin all-rounder K Cottoy played his first encounter and scored 27* runs along with one scalp. He can be an excellent grand league pick for the match.

Obed Mccoy is a good pacer for St Lucia Zouks and took four wicket-haul in the first match and five scalps in the last three games. If plays then he is right to pick in SNP vs SLZ Dream11 Team.

If you liked St Kitts and Nevis Patriots vs St Lucia Zouks Dream11 Prediction, then follow us on Twitter for Dream11 Team and Fantasy Cricket Tips. You can also find us on Facebook.