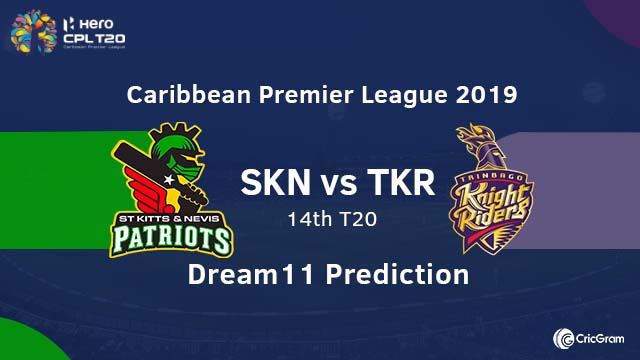 SKN vs TKR Dream11 Prediction, Preview and Probable Playing XI for the match 14th match of CPL 2019. Trinbago Knight Riders will take on the St. Kitts and Nevis Patriots in the 14th encounter of Caribbean Premier League 2019 at Warner Park in St Kitts.

St. Kitts and Nevis Patriots are third on the points table with two victories in six encounters. They defeated St Lucia Zouks comprehensively by 6 wickets in the last battle. Their top-order Evin Lewis, Devon Thomas and Laurie Evans have been the key performers with bat scoring 175, 137 and 150 runs till now. Fabian Allen has also performed consistently with the bat in limited chances. Sheldon Cottrell and Rayad Emrit have taken crucial scalps for the team and are in good form. Debutant Akeem Jordan starred in last encounter taking four wicket-haul. Skipper Carlos Brathwaite will be eager to regain his form and lead his team to another victory defeating mighty Trinbago Knight Riders.

Reigning champions Trinbago Knight Riders have won all four of their encounters yet in CPL 2019 and are in brilliant form. Their batsmen are scoring plenty of runs and have ensured to take the team to a good total. Lendl Simmons and Kieron Pollard have scored more than 150 runs till now while Colin Munro came to all guns blazing in his first encounter scoring 96 runs. Jimmy Neesham has also done wonders for the Riders with the ball being leading wicket-taker of CPL’19 with eight scalps. Mohammad Hasnain has also performed well and has taken six scalps till now. More importantly, Sunil Narine has also been at his best contributing with the bat as well as the ball. They will hope for a similar unison effort against Patriots and continue their winning streak ahead.

The first two matches of the season at the Warner Park, Basseterre, St Kitts. Were high-scoring games while the previous two games were low scoring.

Similar conditions can be expected for tomorrow’s encounter unless the new pitch is used which will be batting friendly.

Devon Thomas will open the innings and can play attacking knocks. His domestic form is also good and scored 62 and 71 runs in two matches.

Dinesh Ramdin is an experienced campaigner and will bat in the middle order. He scored 33, 21 and 50* runs in three matches. He can be demoted in case of good start from top-order.

Evin Lewis is a destructive opener and will be essential batsmen for St Kitts and Nevis Patriots. He scored 36, 9, 53, 12 and 65 runs in five encounters.

Colin Munro is an outstanding T20I batsman and was the top scorer of CPL 2018 and continued his similar run this season too with an unbeaten 96-run knock in the last match. He can also bowl a few overs of medium pace.

Lendl Simmons is an attacking opener and has the potential to play big knocks. He scored 63 and 86 runs in the last two matches.

Keiron Pollard is in excellent form and performed well in IPL, Canada T20 league and T20 series against India. He scored attacking knocks of 47, 33*,26* and 45* runs in four encounters.

Shamarh Brooks played attacking 27 and 34 runs in two matches and is a consistent performer. He can play tomorrow.

Sunil Narine can be a match-winner in either of the departments. He scored 46 runs and took two wickets in the third last match and has made handy contributions in other games also.

J Neesham is one of the best all-rounders in world cricket currently and will be a must pick in TKR vs SKN Dream11 team. He scored 33 runs in the first match and has taken eight wickets in four games.

M Hafeez will bat in the middle-order and can bowl a few overs of spin. He is an experienced player, but his recent form is not very good. He scored 14 and 26 runs in last two matches.

Skipper Carlos Brathwaite failed miserably in all six encounters. He can bowl in death overs and do late hitting for the team.

Seekuge Prasanna is a spin all-rounder from Sri Lanka and is an average performer.

Sheldon Cottrell is an excellent pacer and can be lethal in initial overs. He took three wicket-haul in the first match.

Rayad Emrit performed brilliantly in Canada T20 league and is a good all-rounder. He has taken seven scalps till now including three wicket-haul in the opening match and two scalps in the last encounter.

Debutant Akeem Jordan bowled lethal spell in his first encounter taking four wicket-haul and can be a good pick in TKR vs SKN Dream11 team.

Usama Mir failed miserably in first matches but bowled a brilliant spell in last encounter taking two wickets along with a maiden.

Khary Pierre is a talented spinner and performed exceptionally well in CPL 2018. He took two scalps in the first match and can perform well in the second innings when pitch slows down. However, He has failed until now in rest matches.

Javon Searles is a good all-rounder. He will bat in the lower middle order and can bowl a few overs of medium pace. He has not bowled any over in four matches.

USA Pacer Ali Khan is a good bowler of T20 format and can be a good option in the bowling category. He has not performed as per his talent till now in CPL 2019.

If you liked Trinbago Knight Riders vs St Kitts and Nevis Patriots Dream11 Prediction, Then follow us on Twitter for Dream11 Team and Fantasy Cricket Tips. You can also find us on Facebook.