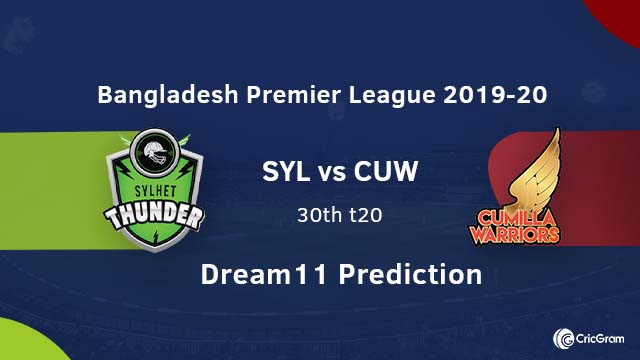 They are on the bottom end of the points table with just one win in eight matches and are struggling to perform as a team. In the last match, They lost to Rangpur Rangers by seven wickets.

Batting first, Mohammad Mithun was the only positive with the bat for Thunder scoring 62 runs to take the team to a below-par total of 133. In defence, Naveen-ul-Haq and Ebadot Hossain bowled well with the former taking two scalps in losing cause for the team. They will hope to put their best effort in remaining matches and put an improved show at their so-called home ground.

Warriors are fifth on the points table with three wins and five losses. They defeated Chattogram Challengers by three wickets in the last match.

Bowling first, Soumya Sarkar bowled exceedingly well taking two scalps and was supported by Sunzamul and Mujeeb to restrict Challengers at 159 runs. In the chase, Skipper Dawid Malan continued his exciting form scoring match-winning knock of 74 runs to chase the target successfully. They will hope to get another victory tomorrow defeating Thunder.

The Pitch behaved strangely last season with initial matches being low-scoring and then resulting in a run-fest in subsequent matches.

Top-order batsmen, All-rounders and impact bowlers will be the key in your fantasy team.

Pacers from the first half and spinners from second innings can fetch many points in your fantasy team. The chasing team will have an edge over the team batting first.

Johnson Charles: Windies power hitter Charles is in good form presently scoring 262 runs in eight matches and will be a must-pick in your fantasy team.

Andre Fletcher: Opener Fletcher can be a match-winner once set and has scored 188 runs till now in six innings but got out on duck in the last match.

Mosaddek Hossain: Skipper can play crucial knocks in the middle order along with part-time spin. He has scored 200 runs till now and can be a good choice as captain in grand leagues.

Mohammad Mithun: He has scored 241 runs till now and has been a consistent performer for the Bangladesh team. Mithun scored 62 runs in the last match.

Sherfane Rutherford: He is an attacking yet reliable lower-order hitter and can also bowl a few overs of medium pace. He scored 38*, 26* and 16 runs in his three matches till now and also took one scalp.

Naveen-ul-Haq: Afghan pacer Naveen is a wicket-taking pacer and will be a must pick in CUW vs SYL Dream11 team.

Ebadot Hossain: He is a talented pacer and has taken seven scalps till now. His economy has also been at the lower side.

Soumya Sarkar: He will bat in the middle order and also bowl a few overs of medium-pace. He has taken eleven scalps in eight matches and also scored attacking 88* runs knock in second last match.

Mujeeb Ur Rahman: Afghan spin master Mujeeb has taken nine scalps in eight matches and is looking in good form. He can be a good pick in SYL vs CUW Dream11 team.

David Wiese: Kolpak all-rounder Wiese is in excellent form recently and can be the best choice for captain in grand leagues tomorrow.

Al-Amin Hossain: Pace bowler Al-Amin is a consistent performer with the ball and has taken eight scalps till now. However, He failed to perform in the last match.

Stiaan Van Zyl: He is an average batsman and can be a risky pick for tomorrow. He scored 22 runs in the last match.

If you liked Sylhet Thunder versus Cumilla Warriors Dream11 Prediction, then follow us on Twitter for Dream11 Team and Fantasy Cricket Tips. You can also find us on Facebook.