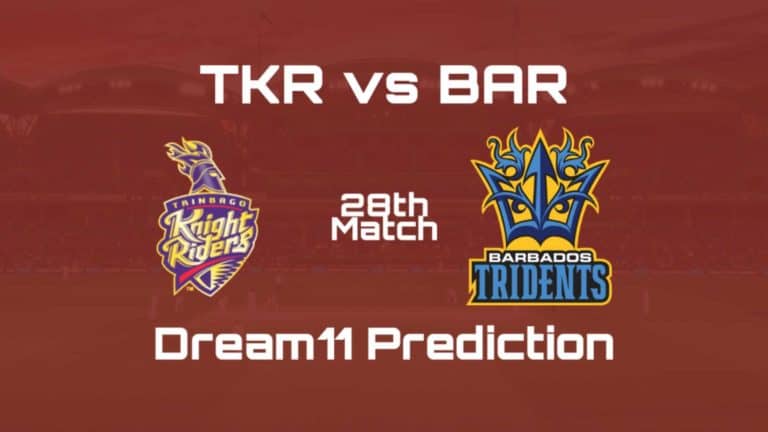 TKR vs BAR Dream11 team prediction, match preview, Top Picks and probable playing XI of the 28th match of CPL 2019. Barbados Tridents will take on the Trinbago Knight Riders in the twenty-eighth T20 of Carribean Premier League 2019 at Queen’s Park Oval in Trinidad.

Trinbago Knight Riders are third on the points table with four wins and three losses. They got their last victory four matches ago and will be eager to regain the lost momentum.

In the last match, They lost to Guyana Amazon Warriors by 19 runs. Bowling first, Javon Searles was the pick among bowlers taking three wicket-haul to restrict Warriors at 185. In Chasing, Kieron Pollard and Darren Bravo played crucial knocks of 71 and 58* runs but were left behind by 19 runs.

Barbados Tridents are just behind Riders in the points table with four wins and five losses. They will play their last league match tomorrow and will hope to put a dominant show to enter the playoffs on a high note.

Pitch is expected to be batting friendly with less support to bowlers.

Death bowlers of first innings can fetch you good points while spinners can take a plethora of wickets in the second innings when pitch slows down.

Sunil Narine can be a match-winner in either of the departments. He scored 46 runs and took two wickets in one match and has made handy contributions in other games also. In his last game too, He scored attacking 19 runs and took one scalp along with a maiden. If fit, he will play tomorrow.

Lendl Simmons is an attacking opener and has the potential to play big knocks. He scored 63, 86, 90, 11 and 16 runs in the last five matches and is in brilliant form.

Colin Munro is an outstanding T20I batsman and was the top scorer of CPL 2018 and continued his similar run this season too with an unbeaten 96, 28, 23 and 2 runs in four matches.

Jimmy Neesham is one of the best all-rounders in world cricket currently. He scored 33 runs in the first match and has taken nine wickets in seven games. He has failed to perform from the last four games.

USA Pacer Ali Khan is a good bowler of T20 format and can be a good option in the bowling category. He took four scalps in the last four matches.

Khary Pierre is a talented spinner and performed exceptionally well in Caribbean Premier League 2018. He took three scalps in the last two matches and can perform well in the second innings when pitch slows down.

Shakib Al Hasan is one of the best spin all-rounders. He scored 38 and 22 runs and took two scalps in two matches. He will be a must-pick in BAR vs TKR Dream11 team.

Jason Holder is an attacking batsman and can take wickets in a crucial situation for the team. He took two wickets each in four matches but has failed to perform with the bat.

Spin all-rounder Hayden Walsh is in good form recently. He has taken fifteen scalps in five matches including five and four wicket-haul in the last two games.

Raymon Reifer is a good pace all-rounder. He scored 26 and 34 runs in two matches and also took five scalps in the last four games. He can be the right choice in your fantasy team.

Harry Gurney is a wicket-taking pace bowler and has a brilliant variation of slow balls. His recent form in T20 Blast was also excellent and took five scalps in the last two matches.

Alex Hales is a T20I specialist opener and can play a big knock on his day. His form in the T20 blast was good but has failed to replicate it in CPL 2019 and got out on a duck in the last match.

Most wicket-takers in the Caribbean Premier League 2019 till now

If you liked Trinbago Knight Riders vs Barbados Tridents Dream11 Prediction, then follow us on Twitter for Dream11 Team and Fantasy Cricket Tips. You can also find us on Facebook.