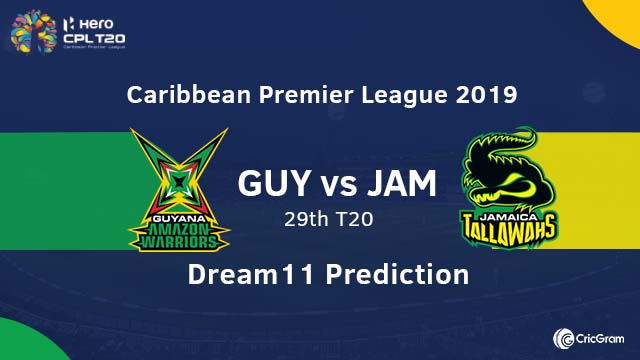 GUY vs JAM Dream11 Team Prediction, Preview and Probable Playing XI of the 29th match of CPL 2019. Guyana Amazon Warriors will take on the Jamaica Tallawahs in the twenty-ninth encounter of Carribean Premier League 2019 at Providence Stadium in Guyana.

Table-toppers Guyana Amazon Warriors have an undefeated run in CPL 2019 winning all eight encounters. Their batsmen and bowlers are performing consistently for the team and are giving their best effort in every match.

They won their last encounter against Trinbago Knight Riders by 19 runs. Batting first, Chanderpaul Hemraj and Shimron Hetmyer played good knocks of 66 and 48 runs to take the team to a total of 185. Moreover, Romario Shepherd played attacking cameo of 32 runs in just 13 balls. In defense, the lethal spin duo of Imran Tahir and Chris Green took two scalps each to ensure a 19-run victory for the team.

Jamaica Tallawahs have had a forgettable run in Caribbean Premier League 2019 losing seven of the nine encounters. Their big guns have failed to perform consistently while their bowlers have been the entire clueless season. Injuries have further impacted their balance.

In the last match, they lost to St Lucia Zouks by four wickets. Batting first, Dwayne Smith scored brilliant knock of 58 runs and was supported by Liton Das, Gayle and Phillips to take the team to a total of 165. With the ball, Imran Khan struck twice while Zahir Khan, Raamal Lewis and Dwayne Smith took one scalp apiece but were not enough to stop Zouks from chasing the target. They will hope to end the season on a good note giving a tough challenge to undefeated Warriors.

Pitch is expected to be neutral with equal support to batsmen as well as bowlers.

Batting first, generally has an advantage here as the pitch gets slow down in the second innings making it challenging to bat freely.

Shoaib Malik has got a start in almost all the matches and can also spin the ball if needed. He scored 67* runs in fourth last match and also bowled the most economical spell of CPL’19 in the third previous game. He also took one scalp in the previous game.

Shimron Hetmyer is an attacking batsman. He scored a quick cameo of 70, 44 and 48 runs in three matches.

Nicholas Pooran is in very consistent form, and scores run in almost all the matches. He scored attacking 61*, 18*, 20 and 3 runs in the last four games he came to bat.

Chris Green is a competent spinner and can pick wickets in every match for the team. He can also bat well in a tough situation for the team. He took nine scalps in the last five games, including two wicket-haul in the previous match.

Imran Tahir is a brilliant spinner and can be lethal on slow wickets. He took ten scalps in five matches.

Romario Shepherd is a lethal pace bowler and took nine wickets in six matches. He can also bat well and scored 13 ball-32* in the last game.

Dwayne Smith is an experienced performer in the T20I format. He took five scalps in the last four matches and is in excellent bowling form, scored 58 runs in the previous game.

Liton Das will bat in the middle order and scored 21 runs in his first match.

Chris Gayle is one of the world’s best T20I batsmen. He scored attacking 116 runs in the second encounter but failed miserably in rest matches.

Imran Khan is a talented spin all-rounder. He will bat in the lower middle order and bowl a few overs of leg-break. He took three-wicket haul in the second last match.

S Springer is a good pace allrounder. He took three scalps in the second last match and will also do late hitting for the team.

Zahir Khan is a top Afghan spinner and can trouble batsmen with his witty spin. He took three-wicket haul in one match.

Raamal Lewis is an average spinner and handy finisher. He scored 37* and 27 runs in two matches and also took four scalps till now.

If you liked Jamaica Tallawahs vs Guyana Amazon Warriors Dream11 Prediction, then follow us on Twitter for Dream11 Team and Fantasy Cricket Tips. You can also find us on Facebook.