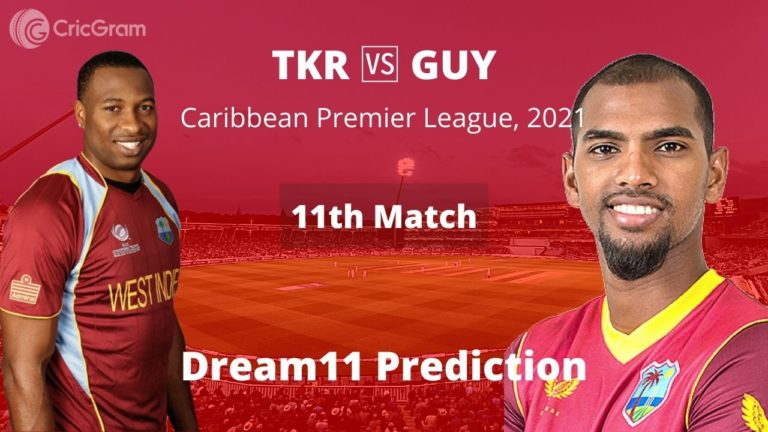 Knight Ridders have played well so far as they have won two out of the four matches and are currently at the 2nd position on the points table with four points. The bowlers performed brilliantly in the last game, and they comfortably won by 27 runs.

Simmons and Narine opened the innings but couldn’t give a good start. In the middle-order, Tion Webster and Colin Munro have struggled to score runs. Only Kieron Pollard and Tim Seifert have been consistent with their performance.

The bowling department has performed better than the batsmen so far this season. Ravi Rampaul, Isuru Udana, and Sunil Narine have picked up wickets consistently. Akeal Hosein managed to pick up a wicket in the last match. TKR would be hoping to continue the momentum for the rest of the season.

Amazon Warriors are not in a good position as they lost two out of the three matches and are currently at the 4th position on the points table. In the last game, the batsmen performed well, but the bowlers were not up to the mark, and as a result, they lost by six wickets.

For the first time this season, Hafeez opened the innings and batted brilliantly, scoring a fifty, and the other opener, Hemraj, has been batting decently. At No.3, Hetmyer has scored runs consistently. The middle-order appears to be weak, with Pooran, Brandon King, and Shoaib Malik not scoring many runs.

The bowlers performed brilliantly in some of the matches but lost the rhythm in the last game. Imran Tahir and Odean Smith have performed consistently in all the matches. Naveen-ul-Haq managed to pick up a wicket in the previous game. Amazon Warriors would be hoping to bounce back by winning the next game against TKR.

The Weather will be mostly sunny, and there is no chance of rain during the match.

The venue acted neutral for batting and bowling units, but the team batting first had advantages in most games. Chasing anything around 160 has been tough here.

Narine has started to open the innings from the last match, scored 24 runs, and bowled brilliantly, picking up one wicket for 16 runs and a maiden over.

He is one of the experienced bowlers on the team. Rampaul picked up three wickets in the last match and is the leading wicket-taker in this season.

Pollard is the skipper of the team and has been batting brilliantly this season. He scored 41 runs from 29 balls in the last match.

He bowls slower balls and picks up wickets consistently. Udana managed to pick up two wickets in the last match.

Seifer generally bats in the middle-order and provides good finishes for the team. He scored 37 runs from 25 balls in the last match.

He is an experienced all-rounder and opened the innings in the last match. Hafeez batted brilliantly, scoring 70 runs from 59 balls but went wicketless.

Simmons opens the innings for the team. He has appeared out of form so far this season, but he can play big shots and provide a good start.

Hetmyer batted at No.3 in the last match. He has already scored two fifties this season.

Tahir is an experienced leg-break bowler and bowled well in the last match, picking up two wickets for 26 runs in his four overs.

He is a left-arm orthodox bowler and can also be handy with the bat down the order. Akeal bowled brilliantly, picking up one wicket for just 12 runs in his four overs in the last match.

He bowls right-arm fast and managed to pick up a wicket in the last match. Odean can also score some crucial runs.

Hemraj opens the innings and can also bowl a few overs of spin if required.  He scored 14 runs in the last match.