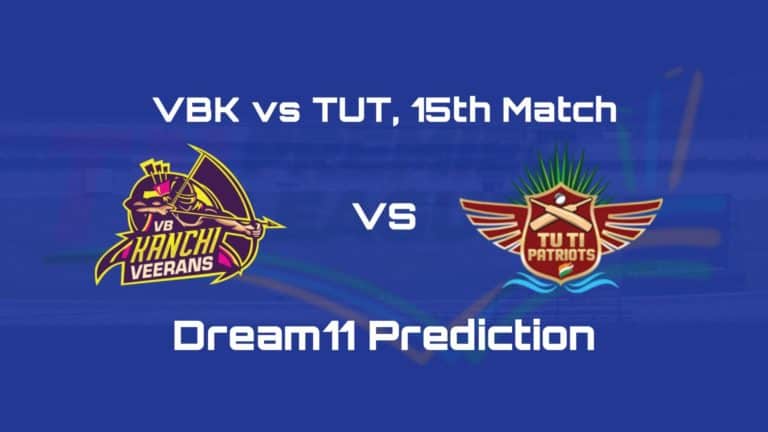 VB Kanchi Veerans and Tuti Patriots will face-off in the 15th encounter of Tamil Nadu Premier League 2019 at
Tirunelveli. We will provide VBK vs TUT Dream11 Team Prediction, Preview and Probable Playing XI for the match.

VB Kanchi Veerans are third on the points table with two wins and one loss. They won their last match against Madurai Panthers by seven wickets. Bowling first, Pace duo of Silambarasan and Rajagopal Sathish bowled brilliantly taking five and two wickets respectively to restrict Madurai at 138. In the chase, S Lokeshwar and Baba Aparajth played crucial knocks of 51* and 44 to chase the target comfortably. Also, Rajagopal Sathish scored attacking 22* runs cameo from 11 balls. They will be eager to continue the winning run ahead and defeat under-performing Tuti Patriots.

Tuti Patriots have won one and lost two encounters till now in TNPL’2019. In the last match, They failed to Dindigul Dragons by 40 runs. Bowling first, M Ganesh Moorthi and Senthilnathan bowled economical spells taking two wickets each to restrict Dragons at 173. Also, Tamil Kumaran took two scalps; however, he could not control his economy. In the chase, Patriots batting line-up collapsed miserably and were limping on 54/7 before SP Nathan, and M Ganesh Moorthi played crucial knocks of 38* and 35 but were ultimately left behind by 40 runs. They will hope for a responsible performance from batsmen tomorrow against Solid Kanchi Veerans team.

S Lokeshwar will bat in the middle order for Veerans and scored 51 runs each in two matches he got promoted in top order.

M Kamlesh can handle the wicket-keeping duties for Patriots. He will bat way down the middle order.

R Sathish is one of the best all-rounders of TNPL as he can play big knocks with bat and will also bowl his quota of overs. He scored 31*, 22 runs and took four and two scalps in last two encounters.

Akshay Srinivasan has performed exceedingly well scoring 55 and 31 in first two matches. He can also bowl a few overs of spin.

Skipper V Subramanian Siva will be the key batsmen for Patriots and scored 28 and 44 runs in first two encounters. He can also bowl a few overs of medium pace.

Sanjay Yadav scored attacking 31 and 95 runs in two matches he came to bat and can also bowl a few overs of spin.

V Saravanan will do late hitting duty and can also bowl a few overs of medium pace. He has performed well in the first two encounters.

S Siddharth will open for Veerans and got a good start in his first match.

K Vishal Vaidhya is likely to open for Veerans. He scored 27 runs in second last match.

P Francis Rokins is a useful middle-order batsman and scored quick cameo of 25 runs in the first match. He will get less chance to bat due to the quality batting line-up.

SP Nathan scored good knock of 38* runs in the last match. He will bat way down the order.

S Abishiek will bat in the middle order for Patriots and can score at attacking strike rate. He can be risky for tomorrow’s encounter.

Baba Aparajith is an experienced player of Tamil Nadu and can contribute with the bat as well as the bowl. He scored 29, 19 and 44 runs in three encounters.

N Rajagopal can bat in middle order and bowl a few overs of medium-pace. He is a talented youngster and has the potential to play a good knock.

B Senthilnathan will open for Patriots and will also bowl his quota of overs. He impressed with the ball in the last match taking two scalps.

D Kumaran will lead the pace attack for Patriots. He took two scalps each in the last two encounters.

M Ganesh Moorthi will lead the spin attack of TUTI Patriots. He took two scalps and scored 35 runs in the last match.

A Davidson is an experienced pacer and is lethal in death overs with his yorkers. He took two scalps in his first encounter. However, He failed in the last match.

K Thamarai will handle the pace battery for Veerans and took three scalps in two matches.

Rangaraj Suthesh is a left-arm pacer and will be the key of Veerans bowling line-up. He took three scalps in three matches.

NS Harish failed miserably in the first match but can be a handy option with the ball as well as bat.

If you liked Tuti Patriots vs VB Kanchi Veerans Dream11 Prediction, Then follow us on Twitter for Dream11 Team and Fantasy Cricket Tips.