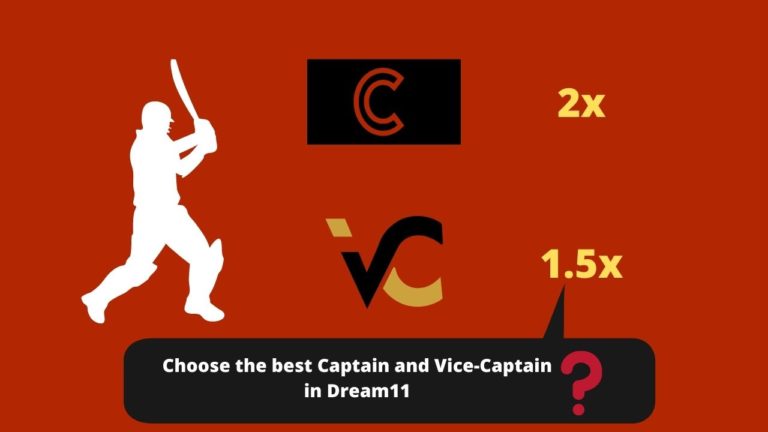 Choose The Best Captain and Vice captain in Dream11

How to choose the best Captain and Vice-Captain in Dream11

The proper strategy for selecting a good captain and vice-captain in Dream11 is essential for a successful fantasy career. Captain and Vice-Captain are the crucial players for fantasy cricket teams. As the captain gets double the points, while the vice-captain gets 1.5X times the points scored.

Here, I will give you a few tips which will help in deciding the best choice for captaincy and vice-captaincy.

To select Best Captain and Vice-captain in Dream11:

Generally, All-rounders are the best picks for this Captain and Vice-captain in a small league of Dream11, but we need to assess the match condition for the same. An all-rounder who gets enough chance to bat and also bowls his quota of overs is the best choice for C and Vc. He can make a mark in either of the departments and fetch you many points.

Sunil Narine, who opens for Kolkata Knight Riders, is an attacking manner. He is also skilled with the ball. Other such players like David Willey for Yorkshire, Hardik Pandya for Gujarat Titans, Shakib Al Hasan for Bangladesh, etcetera are likely to score good points and are safe picks for captaincy.

An all-rounder who bats at lower down the order and hit the runs with high strike rate Along with handy spell with the ball can also be a good option for the Fantasy Cricket Team.

Star batsmen who perform consistently and bat in top-order are also the best options for captaincy. Like, Virat Kohli, Rohit Sharma, Joe Root, Babar Azam, and David Warner, who have the talent to anchor an innings and score plenty of runs in most of the matches.

Also, These players are Captain/Vice-captain in most of the opponent’s team in H2H leagues. So it cannot be avoided.

Some Stormy opener batsmen like Rohit Sharma, Aaron Finch, Jason Roy, Chris Gayle, and Martin Guptill, etc. they can play big innings on their day. However, they don’t perform consistently and can be a hit-or-miss type player. Select them considering the conditions like early swing and opponent bowlers.

For example, Bhuvneshwar Kumar mostly gets rid of Chris Gayle, and the latter has a poor record against him and other swing bowlers. So, proper analysis is a must before choosing them as captain or vice-captain. However, they are a must-try in grand leagues and can fetch you lakhs of winnings.

Also, there are a few batsmen who can bowl if required and don’t bowl regularly like Soumya Sarkar, Rovman Powell, Shreyas Iyer, and Joe Root, etc. They are also suitable for vice-captain choice.

There are some bowlers also who can change the course of match single-handedly, such as Jasprit Bumrah, Mitchell Starc, and Trent Boult. They can also be a good option for captaincy if conditions are supportive of them.

Also, few bowlers have an excellent record against a particular side and can take advantage of their weaknesses. Like, the Indian spin duo of Chahal and Kuldeep were tough to tackle by overseas teams like New Zealand and brought a plethora of wickets against them.

Death bowlers in a T20I match or a swing bowler in pace-friendly conditions are useful as a captain. Like, Chris Woakes is lethal in the initial overs for England.

Also, Bowlers who can be handy with bat-like Bhuvneshwar, Pat Cummins, K Rabada and Hasan Ali can be a good pick, especially in test matches.

Like making Mohammed Amir Captain and Rohit Sharma as Vice-captain is unlikely to work. Because either of them is likely to destroy other player’s day.

In the image above, Our Captain is a bowler, and Vice-captain is a batsman from the other team. As a result, we can get below situations:

– Our Fantasy team’s Captain bowls to our Vice-captain. In that case, the Vice-captain makes runs, and our Captain stays wicket-less.

– Captain (bowler) takes the wicket of the Vice-captain, and our team is out of the competition in the grand league.

– In this situation, there are rare chances of both our Captain and Vice-captain performing well.

Therefore, It is better to choose any all-rounder or star batsmen as captain and vice-captain in H2H or Small Leagues leagues as most opponents will join with the same captain.

However, In grand leagues, you can try different combinations of captain and vice-captain. It can help to make your team overcome thousands of other teams and become a champion.