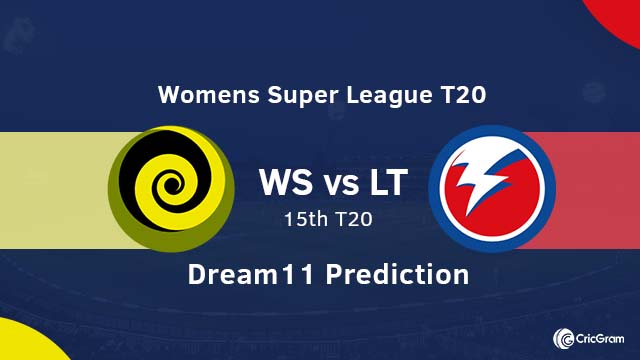 Western Storm and Lancashire Thunder will face-off in the 15th match of Women Cricket Super League 2019 at Boughton Hall in Chester. We will provide WS vs LT Dream11 Team Prediction, Preview and Probable Playing XI for the match.

Table-toppers Western Storm has an undisputed run till now winning all five encounters on the trot. They defeated Yorkshire Diamonds by nine wickets in the last meeting. Bowling first, Pace attack led by Anya Shrubsole was on the money and restricted Diamonds at 151. Also, Rachel Priest was excellent on the field along with Sophie Luff, resulting in five run-outs. Chasing the target, Rachel Priest and Smriti Mandhana scored attacking 72* and 70 to ensure a comfortable victory for the team. They will be eager to continue the winning run ahead and defeat Lancashire Thunder tomorrow.

Lancashire Thunder is on the opposite end of the points table with no win and four losses yet in this edition. Their last match against Southern Vipers ended in a tie. Batting first, Lancashire openers collapsed on three runs but some handy contributions in middle order surged team to a total of 132. Harmanpreet Kaur was the top scorer for her 34-run knock. Emma Lamb and Sophie Dunkley Brown supported Harmanpreet. Also, Kate Cross and Sophie Ecclestone scored late cameos of 22* and 14* respectively. In defence, Emma Lamb took three wicket-haul while Cross and Ecclestone took two scalps each totally the scoreboard. Thunder will hope to open their account tomorrow defeating mighty Western Storm.

Pitch is expected to be neutral with an average total near 150.

Rachel Priest has an excellent hitting ability and can be dangerous anytime. She scored 72* runs in the last match and is fifth on the list of top scorers with 155 runs in 5 games.

E Threlkeld will bat way down the order and is an average performer.

Heather Knight is on the top of the highest run scorers of this edition with 174 runs in five encounters at a whopping average of 58. She can also be handy with the ball.

Smriti Mandhana is one of the best women openers and can score at blistering strike rate. She scored 70 runs in the last match, and 163 runs overall in this season.

Harmanpreet Kaur is a consistent performer. She has also scored 160 runs in 5 matches at an average of 40.

Georgie Boyce performed well in the first encounter opening the innings but now is demoted in the middle order and will be eager to score good knock.

Emma Lamb is performing well for the team taking crucial scalps and scoring good cameos. She has earned seven scalps till now including three wicket-haul and score of 29 in the last match.

Tahlia McGrath is a talented youngster but has not been at her best in this edition. She can open the innings and bowl a few overs of medium pace.

Sune Luus is a very attacking opening batsman and is efficient with her leg-spin also. She scored brilliant knock against Western Storms in the last H2H. However, She will not bowl enough overs.

Indian all-rounder Deepti Sharma has enough potential to contribute with the bat as well as the bowl. She has taken four scalps till now.

Sophie Dunkley Brown is an emerging talent and has played for England team also. She will bat in the middle order and can bowl a few overs of medium pace. She is yet to make a significant mark this season.

Sophie Ecclestone is one of the best spinners in women’s cricket currently and can also do late hitting for the team. She has taken five wickets till now including two scalps in the last match.

Kate Cross has performed well for the England team and is leading the pace attack of Lancashire Thunder. She took three wicket-haul and scored 22* runs in the last match.

Experienced Anya Shrubsole is not looking in good form recently but can destroy opponent batting attack on her day. She bowled good spell in the last match.

Claire Nicholas is on the top of leading wicket-taker with eight scalps in five matches. She is in lethal form.

Freya Davies has also taken eight wickets and can trouble batsmen with her pace and bounce.

If you liked Western Storm vs Lancashire Thunder Dream11 Prediction, Then follow us on Twitter for Dream11 Team and Fantasy Cricket Tips. You can also find us on Facebook.