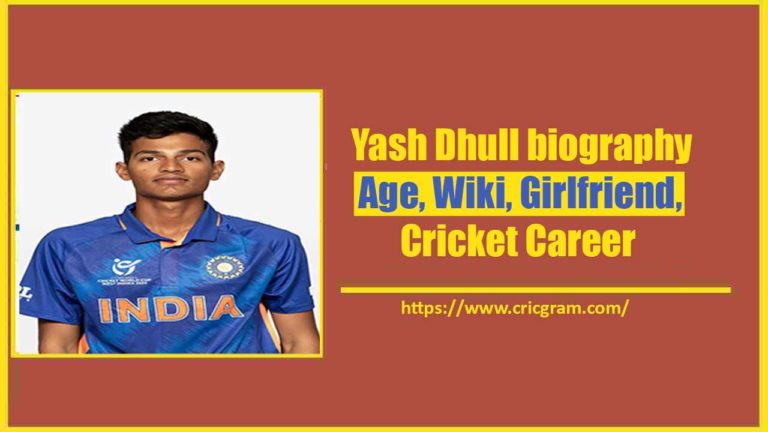 If you are also a fan of the emerging players of Indian cricket ‘Yash Dhull’, and want to know about Yash Dhull’s lives, that how they handled the captaincy of the Under-19 team at just 17 years old, And together, how did they make India the winner of the Under-19 World Cup 2022?
So in such a situation, if you want to know about Yash Dhull’s cricket career and their life, you can read his article Continuously, and you can take information about the life of Yash Dhul.

Before that, let me tell for your information that behind becoming Yash’s famous cricketer, their father contributed a lot. He had left his job to make Yash a cricketer. Their house expenses were only dependent on Yash’s grandfather’s pension.

Yash Dhull Biography: This year’s IPL Mega Auction sold in 50 lakhs, Under-19 team 2022 captain Yash Dhull was born on 11 November 2002 in Janakpuri Delhi, And he is mainly known for playing domestic cricket and IPL. Apart from this, he is also known as the captain of the World Cup winner of the Under-19 2022, And under his captaincy, India won the Under-19 2022 World cup.

Yash Dhull had started playing cricket at the age of 5 to 6 years and at that time he joined a cricket academy in Delhi where he used to learn cricket with a professional trainer.

And after that, he had represented the Under-14 and 16 teams of Delhi at the age of 13 to 14 years, and after that, he took part in the Vinu Mankad Trophy, and he became the highest run-scorer of that trophy, And in five matches of this trophy scored 302 runs at an average of 75.50.

And After seeing his performance, he got a chance to represent India Under-19 at the age of 17, And then he made India Under 19 World Winners in 2022 after 2 years.

Yash has debuted in First Class Cricket (Ranji Trophy) on February 17, 2022, and did it against Debut Tamil Nadu, In which he scored a century in his debut match.

Yash Dhull was the highest run-scorer of the Ranji Trophy that year, in which Yash scored 479 runs at an average of 119.75.

Yash Dhull has started his IPL career in the year 2022 with the Delhi Capital team, and by giving more than his base price (50 lakh), Delhi Capitals had bought him in the auction.
And at the moment, Yash is going to be seen playing on behalf of the Delhi Capitals Team. Given the continuous good demonstrations of Yash Dhull, in 2022, BCCI kept them in the IPL auction,

And this year he will be a part of the Delhi Capitals team. And now have to see how many chances they got in IPL matches.

Q. Who is Yash Dhull?

Ans: Yash is an Indian cricketer, and he plays from Delhi Capital Teams in IPL.

Q. What is the name of Yash Dhulls Cricket Coach?

Ans: Yash has taken training of cricket from his coach Pradeep Kochhar and Rajesh Nagar in the days of his cricket Academy.

Q. What is the Name of Yash Dhull’s IPL team?

Ans: Yash Dhull is currently part of the Delhi Capital team, And in IPL Auction 2022, Delhi Capital has bought Yash with more than his base price.

Today we have presented Yash Dhull Biography in front of you through this article and told how their family struggled to make them a famous Indian cricketers. Yash also achieved this success very hard and diligently. And we hope that he also performs well in the IPL, and moved forward to India.

I hope you will be able to learn something by reading the biography of Yash Dhull, do not forget to enter your comment in the comments box for any other information.