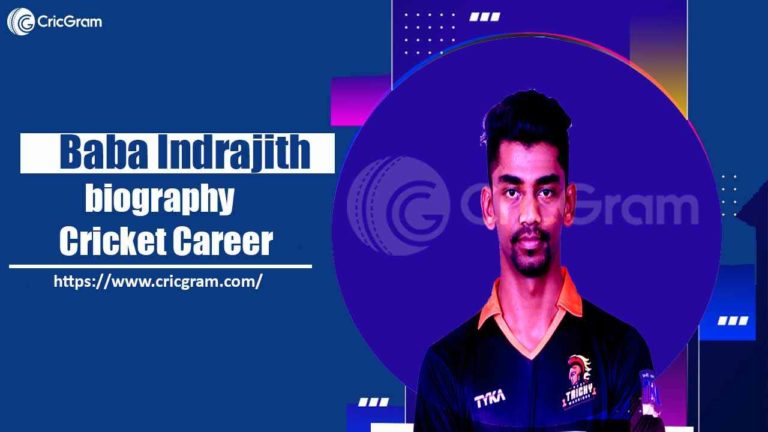 Before that, let me tell for your information that how Baba Indrajith has been performing in the first-class cricket, it can be said that he is going to be seen in the Indian Test team very soon.

Baba Indrajith biography: Baba Indrajith, who debuts in Indian Premier League (IPL) with franchisees like Kolkata Knight Rider, was born on July 8, 1994, in Chennai, Tamil Nadu, And Indrajit is mainly known to play First Class Cricket, Domestic Cricket, and Ranji Trophy for Tamil Nadu.
Apart from this, he will also be seen playing with the Kolkata Knight Riders team in the world’s famous League Indian Premier League from 2022.

Apart from this, Indrajit and Baba Aparajith are two Twin Brothers, which are both connected to Tamil Nadu cricket and play for their kingdom.

At the same time, if we talk about Indrajit’s initiation education, then he has completed all his initial education to Graduation from Chennai City, and he has completed his schooling from St. Bede’s Anglo Indian Higher Secondary School, and after that, he started playing cricket at the age of 16 only. And since then he has been connected to cricket till now.

At the same time, if we talked about Inderjit’s cricket career, then he started playing cricket at the age of 15 to 16, and he chose his cricket career as a right-handed batsman and right -Arm Leg Break bowl.

Baba Indrajith had made their debut in the First Class Cricket for Tamil Nadu in the month of November 2013 at the age of 19 years, and he played his first match against the Saurashtra team (Saurashtra Cricket Team), and since then he played many first-class crickets for Tamil Nadu Teams.

But Baba Indrajith came to the discussion when he hit his first double century in first-class cricket, playing for India Red in the year 2017-18.

Indrajit had joined the India Green team for the first time in the 2018-19 Duleep Trophy. And he also scored one hundred in the match of this tournament, and along with this, he was also the highest scorer of this Duleep Trophy.

Baba Indrajith was playing first-class cricket for Tamil Nadu since 2013 but after waiting for many years, he was bought by the Kolkata Knight Riders team in the IPL Mega Option of the year 2022, and he will play his first IPL match against Chennai Super Kings.

And now the most interesting thing to see is that the Kolkata Knight Riders team gives them a chance in how many matches, and people are also Looking for that, how they will perform in his first IPL matches.

At the same time, if we talk about Baba Indrajith’s cricket career status, then he has scored a total of 3,636 runs in ‘First Class Cricket’ in this small cricket career and in which he includes 11 century and 18 half-centuries, and his batting average is 52.69, And apart from this, he has scored 1,154 runs with 44.38 batting average in the list A cricket matches in which he includes a century and 8 half-centuries.

In this way, Indrajit has scored a lot of runs for his state team in his cricket career, And together many times, He has won ‘Ranji Trophy or other First Class Cricket matches’ for his states with your own batting.

How do you feel after reading the cricket career of Baba Indrajith, Do not forget to enter your opinion and feedback in the comment box below?