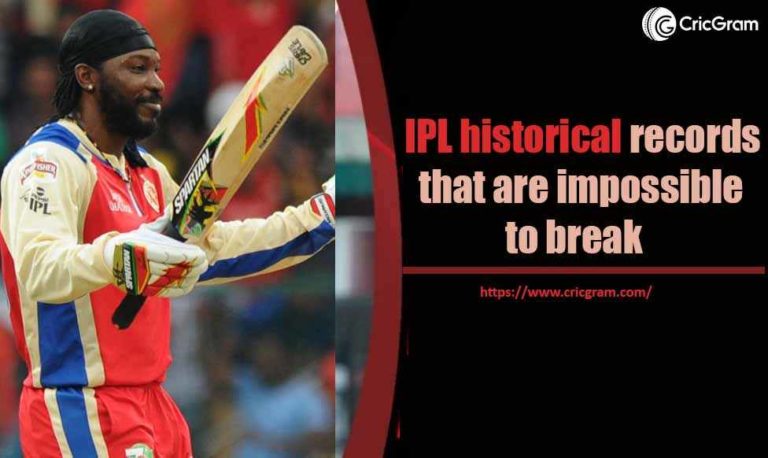 IPL historical records: As you, all know that the Indian Premier League (IPL) is the world’s most famous T20 league, And every season of IPL, a new record has been made, but today we are going to talk about some such records of IPL history. Which will be very difficult or impossible to break by a bowler or batsman in the future. So let’s know about some special records of IPL history.

Before that, let me tell for your information that the IPL 2022 is starting from March 26 this year and its first match will be played in the Wankhede Stadium of Mumbai between Chennai Super Kings and Kolkata Night Riders at 7:30 pm. You can check the full IPL 2022 Schedule here.

Some special records of IPL history

Here is the list of some IPL historical records that are impossible to break.

The first record in this list is the name of famous West Indies player & Universe boss Chris Gayle, who had put the most sixes in the IPL history in the year 2013 IPL season, and he hit 59 sixes in a single season And scored 733 runs in 14 matches.

And the record of the highest 59 sixes in any one IPL season is the name of Chris Gayle, which is almost impossible to break.

In this list, the second record is also the name of Universe Boss ‘Chris Gayle’, who played an unbeaten inning of 175 runs in a match against Pune Warriors in the IPL season of 2013 and in which he hit a total of 17 sixes And 13 fours.

And it is also a record of IPL history which is almost impossible & difficult to break by any batsman, and she is the first batsman of IPL history.
By the way, many batsmen have scored 150 runs in a match so far in the IPL history, but so far this record of Chris Gayle has not been able to break.

At present, Chris Gayle has retired from the IPL world and all the formats of cricket and he is now busy in his personal life.

3. Most runs in a season

The record of making the highest run in any one IPL season is India’s legendary batsman and former captain Virat Kohli, who scored a total of 973 runs in the 2016 IPL season and included four centuries in it.

And this record is also a record of IPL history which is very difficult to break by any batsman,
And in addition to this, tell your information that there are no such batsmen in the IPL history who are able to make more than 800 runs in one IPL season.

At last number in this list, the name of famous former Indian player Sixer King Yuvraj Singh, who played for Kings XI Punjab in the 2009 IPL season, And has taken 2 hat-tricks wickets in a single season of the IPL tournaments.

How do you feel after reading these special records of IPL history, and which of these is a record that you think that any batsman or baller can break in the future, please Enter your comment, opinions, and feedback below the comment box.