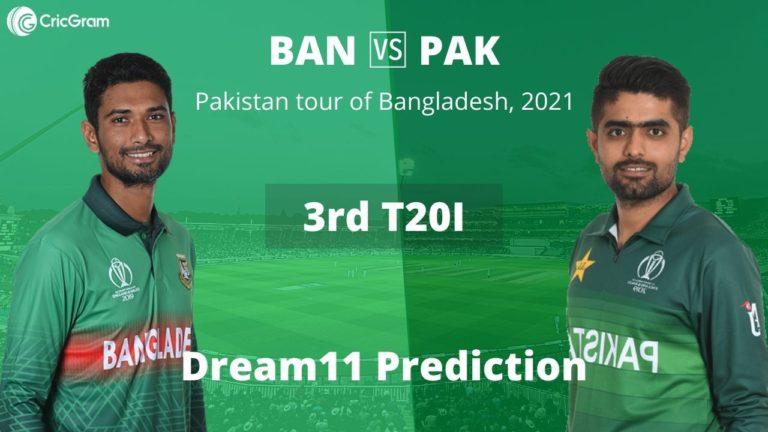 Bangladesh and Pakistan will play in the 3rd T20I match of the Pakistan tour of Bangladesh 2021 at Shere Bangla National Stadium, Dhaka. We will cover BAN vs PAK Dream11 Prediction, Probable Playing 11, and Fantasy Cricket Tips.

Pakistan has sealed the series and it has been a one-sided affair so far. Bangladesh have been very poor with both bat and ball and will play for pride in this game. Their batters have looked clueless in both the games and look for better performance in this game.

Their openers were again dismissed cheaply in the last game. Najmul Hossain Shanto played a good knock of 40 runs and helped his team to put a total of 108 on the board. None of the batters are able to convert their starts and it is a major concern for them.

Although, they have not won any game but their bowlers have done a decent job and always put up a fight against the Pakistani batsman. Mustafizur Rahman has been their key bowler along with Taskin Ahmed in the first two games.

Bangladesh will look to regroup themselves and will hope for some better performances in the last game especially from their batters.

Pakistan has been excellent in the series so far and will look to make cleansweep by winning the last game. They have chased in both the games and have looked brilliant with both bat and ball.

Shaheen Afridi and Shadab Khan were the pick from the bowlers and pick up 2 wickets each in the last game. With the bat, Babar Azam has not looked at his best but Mohammad Rizwan and Fakhar Zaman have played brilliantly.

Zaman was excellent in the last game and played a match winning knock of 57 runs. Rizwan also assisted him very well and played a good knock of 39 runs. Pakistan will again look to try out few more players from the bench and will look to finish on a high.

(The average score is based on the last 5 matches played at this venue.)

The Pitch is looking on a slower side and scoring runs have not been easy and both the games were below 150. Winning the toss and batting first has been the trend so far in this series.

BAN vs PAK Head to Head

He is the most experienced player from the team but has failed in the first two games so far. Mahmudullah scored only 12 runs in the last game.

Naim has not looked at his best in the series so far but is a very talented batter from the team.

He is one of the best bowlers on the team and has picked up 2 wickets in the 2 games so far and is a must-have pick.

He is a very handy player with the bat and ball. Hasan bowled very well in the first game but went wicketless in the last game.

He is very young and talented all-rounder from the team. Hossain played a very good knock of 36 runs in the first game and can also bowl a over or two with the ball.

He is a Left-arm fast-medium bowler. Shoriful Islam took 1 wicket in the series. If Bangladesh bowl first then he will be a good pick.

He is currently the best T20I batsman in the world but is yet to play a big knock in this series but is a very talented batsman and is the default pick for C and Vc in BAN vs PAK Dream11 Prediction.

He is looking in fantastic form and is giving good starts in the powerplay. Rizwan played a very good knock of 39 runs in the last game. M Rizwan is also a very good Captain choice in BAN vs PAK Dream11 Team.

He is one of the quickest bowlers in the World. Afridi played the last game and bowled brilliantly and picked up 2 wickets.

He is playing his role perfectly at no 3 and is looking in very good form. Zaman played a match winning knock of 57 runs in the last game.

He will be a crucial bowler in these spin-friendly conditions. Shadab was excellent in the last game and picked up 2 wickets.

He took 1 wicket in this series. Rauf will bowl in the middle and death overs and can pick up wickets in a bunch.

Wasim has been excellent in this series so far and has picked up 3 wickets from his 2 games.

Trump Card picks for the BAN vs PAK Dream11 Team

He is a very experienced player and can pick some handy wickets in the powerplay and middle overs. Nawaz has picked up 2 wickets so far in the series.