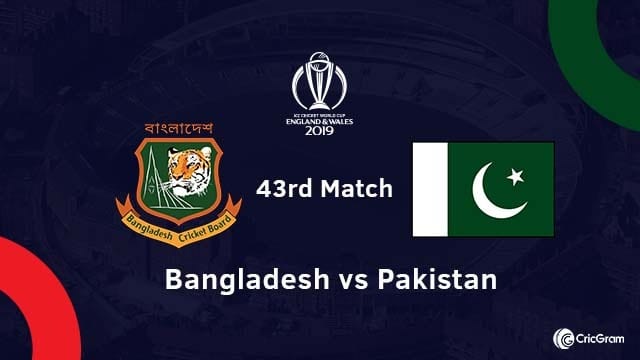 Bangladesh and Pakistan will face-off in the 43rd match of World Cup’19 at Iconic Lord’s stadium in London. We will provide BAN vs PAK Dream11 Team Prediction, Preview and Probable Playing XI for the match.

Bangladesh is seventh on the points table with three wins and four losses. However, these numbers don’t give justice to their performance yet in World Cup 2019 as they have put a solid show against all top teams. They are out of the race for semi-finals and will be eager to give a tough challenge to Pakistan team and end the tournament on a good note.

In the last encounter, They lost to India by 28 runs. Bowling first, Mustafizur Rahman took lethal five wicket-haul to restrict India at 314. In the chase, Shakib Al Hasan and Saifuddin played good knocks of 66 and 51 but were left behind by 28 runs. Other batsmen also got starts but failed to convert into a match-winning knock.

Team Pakistan is fifth on the points table with four wins and three losses and is virtually out of the race for semi-finals due to their poor net run rate. Their batsmen except for Babar Azam and Haris Sohail have failed to perform consistently while their bowlers except Amir and Shaheen have been unable to chip in with wickets. However, they will hope to get a comprehensive victory over Bangladesh tomorrow in their last encounter of World Cup 2019.

In the last encounter, They defeated Afghanistan by 3 wickets. Bowling first, Shaheen Afridi took lethal four wicket-haul and was supported by Imad Wasim and Wahab Riaz who took two scalps each to restrict Afghanistan at 227. In the chase, Babar Azam and Imam Ul Haq failed after getting starts of 45 and 36 respectively. Imad Wasim starred with the bat scoring unbeaten knock of 49 runs to successfully chase the target.

Pitch will be neutral providing equal support to batsmen as well as bowlers and an average total near 250 can be expected.

Mahmadullah is suffering from injury and can be risky. If fit, He will replace Sabbir Rahman in the playing XI.

Mehidy Hasan can also make a comeback in place of Mosaddek Hossain or Rubel Hossain.

Shakib Al Hasan and Mosaddek Hossain will play the role of an allrounder. M Saifuddin and M Mortaza can also be handy with the bat.

Shakib Al Hasan will be the key spinner along with Mosaddek Hossain/Mehidy Hasan while Mustafizur Rahman, M Mortaza, and M Saifuddin will lead the pace attack of Bangladesh along with Rubel Hossain and Soumya Sarkar.

Wahab Riaz played the last match despite injured finger and is likely to play tomorrow also.

Imam-ul-Haq and Fakhar Zaman will open the innings. Babar Azam, Hafeez, Haris Sohail, and Sarfaraz Ahmed will follow them.

Shadab Khan, Imad Wasim and M Hafeez will play the role of an allrounder.

M Amir will spearhead the pace attack along with Wahab Riaz and Shaheen Afridi. Shadab Khan and Imad Wasim will be key spinners along with Hafeez.

They are unlikely to make any changes in the playing XI.

Liton Das played match-winning 94* against Windies and is in good form. He has performed well in limited chances.

Skipper Sarfraz Ahmed can play a crucial role in case of the collapse of the batting unit. He has scores of 8, 55, 40, 12, 2* and 18 in seven matches. He can promote himself in case of chase while can demote himself if batting first.

Imam Ul Haq has an ODI average of 53 and can score a big century on his day. He has a good record against pace bowling. He has scored 44, 53, 44 and 36 in four matches but failed in rest matches.

Saumya Sarkar has shown attacking intent opening the innings and has scores of 45, 25, 2, 10, 29, 3 and 33 in seven matches. He can also bowl a few overs of medium pace and took three wickets against Australia.

Tamim Iqbal has got starts in all encounters till now but has failed to convert into a big knock. He has scores of 48, 62, 36 and 22 in the last four matches.

Haris Sohail is a talented batsman and can play big knocks. He can also bowl a few overs of spin. He scored attacking 89 and 68 runs in last two encounters.

Sabbir Rahman is an attacking finisher but has not performed consistently for his team. He scored 36 runs against India and can be risky for tomorrow.

Mahmudullah has performed consistently for Bangladesh and plays in an attacking manner in the middle order. He scored 69 runs against Australia. He can play tomorrow if fit.

Shakib Al Hasan has been in brilliant form in WC’19 scoring 542 runs in seven matches and has also taken eleven wickets. He can be a good choice for captain or vice-captain in small leagues tomorrow.

M Hafeez has been a consistent performer for Pakistan from many years with the bat as well as the bowl. He scored 16, 84, 46, 9, 20, 32 and 19 in seven encounters and has also taken two wickets till now.

Imad Wasim can play attacking cameos with bat and can bowl good amount of overs with his tight length and generally bowls at the good economy. He scored 46, 23 and 49 runs in the last three matches and also took two scalps against Afghanistan.

Mosaddek Hossain has made handy contributions with the bat as well as ball and can be a good pick among all-rounders.

Bowlers for BAN vs PAK Dream11:

Mohammad Amir has taken seventeen wickets in seven encounters and is in lethal form. He is a must pick in BAN vs PAK Dream11 team.

Mustafizur Rahman is a talented left-arm pacer and has taken fifteen scalps till in seven matches. He can be effective in initial and death overs. He took five wicket-haul against India.

Shaheen Afridi was at his lethal best in the last two encounters taking three and four scalps against New Zealand and Afghanistan.

Experienced left-arm pacer Wahab Riaz can also be lethal on these wickets and can reverse swing the ball later in the innings. He took three-wicket haul against England and South Africa. He can also be handy with bat and scored 45 runs against Australia.

Mohammad Saifuddin can play the role of an allrounder. He has taken ten wickets till now in six matches but has failed to keep a check on his economy. He scored crucial 51* runs against India.

Shadab Khan is a talented allrounder and will be crucial with the bat as well as bowl for Pakistan. He took three scalps against South Africa.

Skipper Mashrafe Mortaza been in poor form throughout the WC’19 and is also suffering from fitness issues. He can also be handy with the bat.

Rubel Hossain is a quick hit-the-deck bowler and can be good on English pitches. He can be risky for tomorrow’s encounter.

Mehidy Hasan can lead the spin attack of Bangladesh and has the ability to chip in with wickets at regular intervals. He has taken five scalps till now and can also be handy with the bat. He can play tomorrow.

If you liked Pakistan vs Bangladesh Dream11 Prediction, Then follow us on Telegram for Dream11 Team and Fantasy Cricket Tips. You can also find us on Twitter. What is your Captain and Vice-captain choice of Dream11 Team? Comments, please.