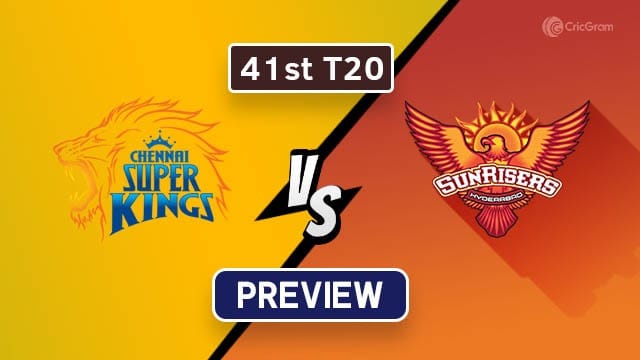 The 41st Match of Indian Premier League 2019 will be played between Chennai Super Kings and Sunrisers Hyderabad. We are covering CSK vs SRH Dream11 Team Prediction, Preview and Probable Playing XI for the T20 match. The match is to be played at MA Chidambaram Stadium in Chennai.

Chennai Super Kings are on the top of the points table with seven wins in ten matches and are moving swiftly for a successful title defence. Unluckily, They lost their last match to RCB by one run. Bowling first, Unison effort from Deepak Chahar, Jadeja and Bravo taking two scalps each to restrict RCB at 161 runs. Chasing the target, CSK batsmen failed to get a good start and were limping on 28-4. Skipper MS Dhoni came for rescue and played an amazing knock of 84* runs in 48 balls but was left behind by a single run. CSK will be determined to utilise home advantage and get back into winning ways defeating Hyderabad tomorrow.

Sunrisers Hyderabad has finally found momentum winning two consecutive matches and are fourth on the points table with five wins and four losses. In the last match, They defeated KKR by 9 wickets. Bowling first, Khaleel Ahmed took impressive three-wicket haul and was supported by Bhuvi who took two scalps to restrict KKR at 159. Chasing the target, Destructive Opening duo of Bairstow and Warner played match-winning knocks of 80* and 67 respectively to comfortably chase the target in just 15 overs. Sunrisers Hyderabad will take confidence from their victory over CSK at Hyderabad and will hope to put their best effort tomorrow.

Pitch will favour spinners a lot.

Harbhajan Singh is likely to return in the XI replacing Shardul Thakur considering the role of spin in Chepauk.

Shane Watson has failed to make a mark in IPL’19 but is likely to get another chance.

Ravindra Jadeja and Dwayne Bravo will play the role of an allrounder.

Deepak Chahar and Dwayne Bravo will be the key pacers while Ravindra Jadeja, Harbhajan and Imran Tahir will lead the spin attack.

Kane Williamson has returned to New Zealand for personal reasons and will not play today. M Nabi or Shakib is likely to replace him in the playing XI.

Vijay Shankar will play the role of allrounder along with Deepak Hooda. Rashid, Shahbaz and Bhuvi can also make handy contributions with the bat.

Bhuvneshwar, Sandeep Sharma and Khaleel Ahmed will be the key pacers along with Vijay Shankar.

Rashid Khan will spearhead the spin attack along with Shahbaz Nadeem. Deepak Hooda can also bowl few overs of spin.

If you liked CSK vs SRH Dream11 prediction, then follow us on Twitter for Latest Cricket News.