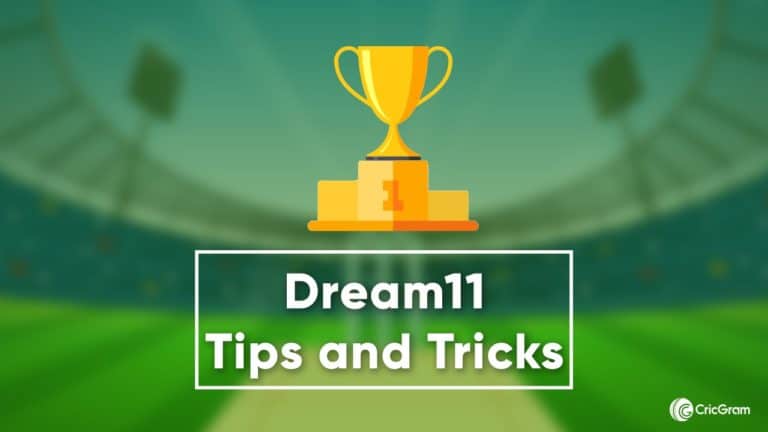 Dream11 Tips and Tricks that help you to create the best Dream11 Team. In this article, You will get Dream11 Fantasy Cricket Tips Such as Small League tips and Grand League Tips.

To succeed in Dream11 Fantasy Cricket, you will need 80% of hard work, and 20% of good luck. And Luck only works when you put on some hard work into it, and fortune won’t favor you otherwise.

If you don’t want to hard work on research and finding information then you can subscribe our Dream11 Telegram Channel to get Dream11 Team and all information about Fantasy Cricket.

Now we will look where we have to work hard, to create a best Dream11 Team follow the steps below:

Research for these points and we have some websites for this, and you’d already know some of these:

If you want to create the best Dream11 Team and win money in Fantasy Cricket, then it is good to check the player’s recent form. Because It has seen, there is a high probability of playing a good inning of inform player than out of from player.

Coach and Captain are also given priority to a player whose current form is good.

We have to research about the pitch condition, about how the pitch will help the bowlers (Faster or spinner), or batsmen. Keeping that in mind, you have to make the team. If we don’t get any news about the pitch, research the ground history for the last 3-5 matches and predict accordingly. You can see that in the Archives section on Cricbuzz.

An average score of ground gives us an idea that what will be the score and how many wickets fall in the field.

We can get the venue stats in the Match Facts of cricbuzz.

Note: This will work only on desktop. If you are using the cricbuzz mobile app, then this method will not work.

After an update on the points system in Dream11, Toss is crucial for creating the Fantasy Cricket Team.

lets I explain with an example: If the match is between South Africa and Afghanistan.

We know that Here, South Africa is a strong team, and Afghanistan is a weak team. So There is a high chance that African bowlers take more wickets. So pick more bowlers from the South African Team.

In the batting of Africa, there is also a high chance that African middle-order batsmen will not get enough time to bat because the Afghanistan team will not give a good target to chase. So it is best to pick top-order batsmen from the African side.

It is good to pick more batsmen or all-rounders than bowlers from the Afghanistan side. Because If the Afghanistan team didn’t give a good target to Africa, then there is a high chance that Africa’s wickets will not down.

Pick more batsmen from the South African team. Their players have high chances to score big.

In this case, it is best to pick more bowlers than batsmen from the Afghanistan team because Afghanistan’s bowlers will take wickets of South Africa.

You can get the playing 11 on cricbuzz.com and espncricinfo.com. After declared the playing XI, The Dream11 app also shows the playing and non-playing players in the Create a team section.

After watching the playing XI, update the team. And make sure all players are playing.

4. Choose the best players as Captain and Vice-captain

Here, I will give you a few tips which will help in deciding the best choice for Captain and Vice-captain.

We have written a separate post about How to choose the best Captain and Vice-Captain in Dream11 by clicking on it you can read there.

Are you curious to know how to win the mega contest in Dream11? If yes, then you are in the right place.

It is every Fantasy player’s dream of winning the mega contest in Dream11 Fantasy Cricket App. Here, I share few tips which help my friends and me to win grand league seven times in Fantasy Cricket.

Here is the screenshot of my Grand League Winning and Team.

Dream11 Tips and Tricks for selecting captain and Vice-captain:

How to choose the best Captain and Vice-captain in Small League:

How to choose the best Captain and Vc in Grand League:

Avoid these mistakes while making Captain and Vice-Captain in mega contests.

In the image above, Our captain is a bowler, and Vice-captain is a batsman from the other team. As a result, we can get below situations:

*Disclaimer: The Dream11 Tips and Tricks on this page based on previous results and expert’s experiences. The purpose of these Fantasy Cricket Tips is to minimize the risks by fundamental strategies. Much homework would be needed to come up with the best team. It is dependent on personal choices and maturity. Cricket is a game of uncertainty, If any tips and tricks do not work, then the author will have no responsibility for the risks faced. If you are not satisfied with the tips and tricks, Then your discretion is advised while choosing the team.