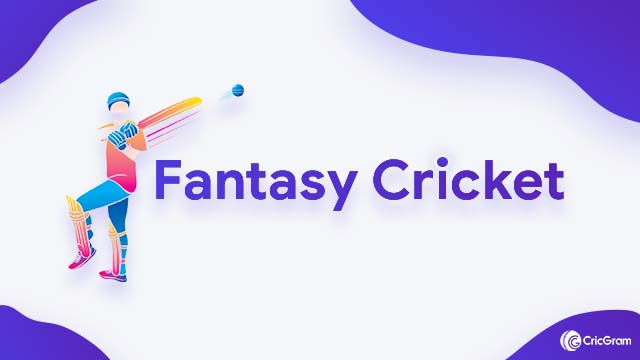 Fantasy Cricket is reaching new peaks of popularity, and why not? India has been a cricket-crazy nation ever since we first knew the game. For decades, we have loved the game and the players who have ruled our hearts. However, in the last few years, the real game has become virtual. Now we are the players or better, the selectors.

The idea of Fantasy cricket has the world of cricket by storm. The basic plan dates back many years, but the concept of playing a single cricket match in the Fantasy world has been a great hit. We can see a hundred fantasy gaming websites popping up everywhere. With real money involved, the market has captured the imagination of one and all. Plenty of famous cricketers have come forward as the brand ambassadors of these games as well. So what’s holding you back?

Here’s a peek into the basics of Fantasy cricket and what it is all about.

What is fantasy cricket

The basic principle of every Fantasy game based on a sport remains the same – you select your team of players from both the participating sides. Your team then earns points based on how the players perform in the actual match. The same system is used in Fantasy Cricket.

This type is of gaming is played online, thus online gaming. Here we create a team online – in the virtual world – which plays in the real world and gets points for us. It is essential to choose the right players and to back them to perform well. Let’s understand what a fantasy cricket team is and how to make one.

The most crucial part of the game is choosing our fantasy cricket team. You have to pick 11 players from both the squads. The all-rounders and wicketkeepers are preferred the most since they can earn points in both the innings. The choices of batsmen and bowlers depend upon their recent form, nature of the pitch, and the conditions. These sites also allow making changes to our team before the match begins. Also, no one else can have a peek at your team before the deadline.

Most gaming sites divide squads of both the participating teams in four categories – Wicket-keeper, Batsmen, All-rounder, Bowlers. Every player is assigned a value called ‘Credit.’ Better performing players are assigned the highest value, whereas irregular performers get the lowest credit value. There is a set limit on both 1. The number of players you can choose from a category (e.g., Maximum six batsmen allowed). 2. The total value of eleven selected players should not exceed a set limit.

Although every gaming site has its own points system, the rules are generally the same. Every run, every wicket, every catch, every run-out/stumping, and every appearance in the playing XI earns you points. Bonus points are rewarded for better strike rate, number of fours and sixes, better economy rate, and milestones such as century and five-wicket hauls. Points are deducted for poor performances as well. Points are also deducted if your bowler concedes too many runs or if your batsman is out on 0.

To add a twist in Fantasy Cricket, you have to need to choose your Captain and Vice-captain. Again the point distribution can vary from site to site, but generally, Captains get double the points they earn (2X), and Vice-captains’ points are multiplied by 1.5. Thus choosing a player who you think will perform the best in the match is very important.

Hundreds of contests are played daily on these sites. Here are a few significant variations:

The most straightforward kind of game is Head-to-Head. It involves only two players, with one finishing as the winner. The winner takes the whole prize with nothing going into the account of the loser. This type of league offers the best odds of winning a contest as your chances of winning are 50%.

It is the next step of Head-to-Head. This type of contest includes more than two players but generally less than five/six players. All players pool in their entry fees with only one emerging as the winner; thus, the name Winner takes all. Here the odds are lesser than Head-to-Head (33% to 20%), but the rewards are higher.

In between Winner takes all and Grand Leagues, some leagues include anywhere between 30 to 300 players. Here the number of winners also increases, but the odds of winning the top prizes are low. These contests sit somewhere in between the two major types.

In Mega leagues, where everyone tries their luck. These are mega contests that can have Lakhs of participants. With these many players, the grand prize is exceptionally high, but the probability of winning is the lowest. All you need to win this type of league is excellent selection and a very, very lucky day.

Yes, luck plays a significant part, but there are a few factors that can take you towards the grand prize. Picking the team on hunches can win you certain games, but to a regular win, there are a few things that are necessary to know. That is where prediction sites come in.

Here we provide you with all the information required to make a winning team – Who will be in the playing XI? Who will not be in the playing XI? Which players are in the best of the form while which players are struggling to put on the runs? How is the ground, will it suit the spinners or will it help the fast bowlers? What is the average total on this pitch? The prediction websites answer these and many more such questions. You can make an informed decision based on all this data.

The legality of Fantasy Cricket

The most basic question that arises in concerns with Fantasy cricket is, whether it is legal or not? The absence of most apps on the Play Store seems to be alarming. But no worries, many have taken the issue to court, and we have our answer. These Fantasy games are completely legal.

As per the Indian Federation of Sports Gaming (IFSG), Fantasy Sports are 100% Legal. Fantasy Sports are classified as “Game of Skill.” However, some state laws like Telangana, Odisha, Sikkim, Assam, and Nagaland may differ in India.

The result of the fantasy game contest is not at all dependent on the win or loss of any particular team in the real-world game. Thus, no betting or gambling is involved in fantasy games. Fantasy sports are based on the skill of participants to determine the outcome, do not come under the definition of a bet since they do not rely on chance or luck to win. Fantasy Sports are classified as ‘Games of Skill,’ where skill dominates over the possibility, with the result depending upon the “relative knowledge, training, attention, experience, and adroitness of the participants.”

The undisputed leader in the Fantasy Gaming currently is Dream11. The flagship site has set the benchmarks that the other websites are forced to follow. From time to time, they have improved their playing conditions and transparency issues. Dream11 has been rolling out new features consistently, which are then followed by others. With an excellent appearance and graphics interface, they are the best platform to play a fantasy sports game. The company has sponsored IPL and significant ICC events.