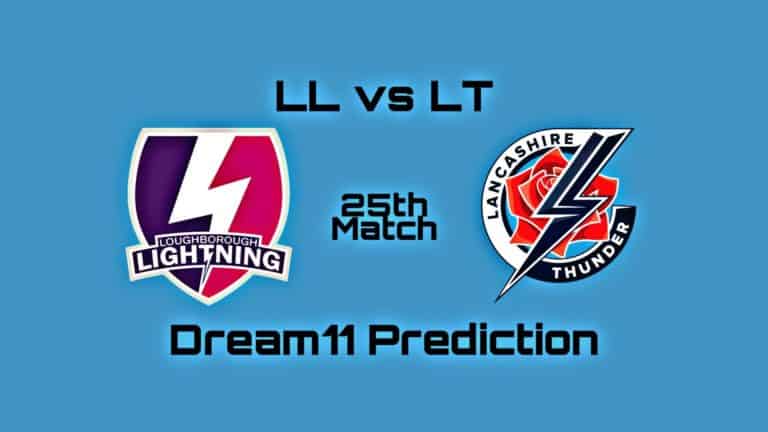 Loughborough Lightning and Lancashire Thunder will face-off in the 25th match of Women Cricket Super League 2019 at Trent Bridge in Nottingham. We will provide LL vs LT Dream11 Prediction, Preview and Probable Playing XI for the match.

Loughborough Lightning is second on the points table with five wins and three losses. They lost their last match to Surrey Stars by 5 wickets. Bowling first, Pace duo of Kathryn Bryce and Jenny Gunn struck twice to restrict Stars at 147. Chasing the target, Mignon Du Preez and Chamari Athapaththu scored brilliant knocks of 48* and 45 to ensure a comfortable chase of the goal. Also, Hayley Matthews provided an all-round effort for the team. They will be eager to continue their good run ahead and defeat under-performing Lancashire Thunder tomorrow.

Lancashire Thunder is on the bottom of the points table with seven losses. They lost their last match to Yorkshire Diamonds by 4 wickets. Batting first, Young wicket-keeper Eleanor Threlkeld scored attacking fifty while Harmanpreet and McGrath scored crucial 38 and 29 to take the team to a total of 164. In defense, Sophie Ecclestone took two critical wickets but failed to defend the target. Lancashire Thunder will hope to open their account tomorrow defeating Loughborough Lightning.

Pitch can be supportive of batsmen. However, An expected average score is 160 runs.

Amy Jones has scored 160 runs in 8 matches at a paltry average of 20. She failed in Ashes as well and is in poor form. However, She will be a must-pick in the wicket-keeping category in LT vs LL Dream11 team.

Harmanpreet Kaur is a consistent performer. She has also scored 255 runs in 8 matches at an average of 36. She scored 38 runs in the last game.

Mignon Du Preez is in super consistent form and is performing in almost all the matches. She has scored 246 runs in 7 innings at an average over 60.

Chamari Atapattu failed in most of the matches but finally performed in the last match scoring crucial knock of 45 runs. She can also bowl a few overs.

Georgia Adams may not have scored many runs but has performed consistently in limited chances. Her average till now is above 42 and can be an excellent grand league pick. She scored 50 in second last match.

Ria Fackrell can bat lower down the order and is an average performer.

Georgie Boyce performed well in the first encounter opening the innings but was demoted to the middle order. She may play tomorrow.

Hayley Matthews has got a good start in most of the matches but has not performed up to her best with the bat. However, Her bowling form is good and has taken nine scalps till now.

Emma Lamb is performing well for the team taking crucial scalps and scoring good cameos. She has taken nine scalps till now including one three wicket-haul. However, She has been unable to perform in the last two matches.

Tahlia McGrath is a talented youngster but has not been at her best in this edition. She can open the innings and bowl a few overs of medium pace. She scored 44, 26 and 29 runs in last three matches.

The skipper of Scotland Women Katheryn Bryce is a brilliant pace bowler and can also be handy with the bat. She has taken seven scalps, including two wickets in the last match.

Georgia Elwiss is a good allrounder and can be the match-winner in both departments. However, Her form has been lackluster this season and has taken six scalps till now.

Sune Luus is a very attacking opening batsman and is efficient with her leg-spin also. However, She will not bowl enough overs. Luus scored 30 and 15 runs in the last two encounters.

Sophie Dunkley Brown is an emerging talent and has played for England team also. She will bat one down and can bowl a few overs of medium pace. Her recent form is inferior.

Jenny Gunn is a good pacer and gave a glimpse of her experience in last match taking two scalps. She is not a consistent performer.

Sophie Ecclestone is one of the best spinners in women’s cricket currently and can also do late hitting for the team. She has taken twelve wickets till now.

Skipper Kate Cross has performed well for England team and is leading the pace attack of Lancashire Thunder. She has taken ten scalps till now.

Kirstie Gordon is a talented spinner and has also performed well for the national side. She has taken eight scalps. However, She failed in the last match.

Sarah Glenn has performed well in the first few matches and is an excellent leg-break bowler.

Natalie Brown played the last match and took one scalp. She can also score few runs with the bat.

If you liked Loughborough Lightning vs Lancashire Thunder Dream11 Prediction, Then follow us on Twitter for Dream11 Team and Fantasy Cricket Tips. You can also find us on Facebook.