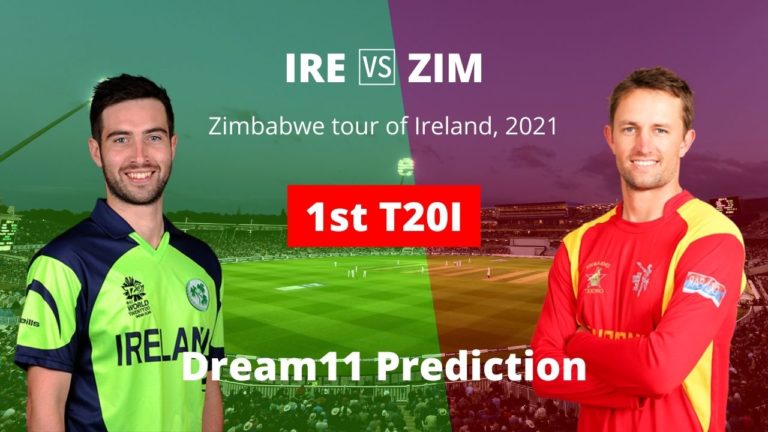 Ireland vs Zimbabwe will be played in the 1st T20I at the Clontarf Cricket Club, Dublin.

Ireland will host Zimbabwe for a 5-match T20I series and a 3-match ODI series. Zimbabwe has nothing to do with the World T20 coming in two months’ time, whereas, Ireland will look to perform well and fo into the qualifiers with some confidence.

Both the teams are coming into this series with a loss. Ireland lost their last series against South Africa by 3-0 and Zimbabwe lost their last one against Bangladesh by 1-2. Ireland has been performing very well in the ODI format lately and will hope to continue that in the T20s as well.

Paul Stirling did not look in great touch in the last series but is coming into this game after playing a match-winning knock for his team in TheHundred mens’ final. He will surely be a crucial player for them, both with the bat and ball.

Their bowling too was ordinary in their last series and will look to work on that as well. Mark Adair was their highest wicket-taker with 5 wickets in his 3 games. They look strong on the paper and will look to comfortably seal the series at their home.

Zimbabwe has played against world-class teams like Bangladesh and Pakistan lately. Though they last the series but have surely improved and have played some good cricket.

They were without their senior pros in their last series but this time around Sean Williams and Craig Ervine has been included in the squad which makes them much stronger on paper. Ervine is also expected to lead the side for the T20I series.

Blessing Muzarabani has made a name for himself in World Cricket with his brilliant performances with the ball. He picked up 4 wickets in their last series and will play a crucial role in this series as well.

With the bat, Wesley Madhevere was the highest run-scorer in the last series with 150 runs in 3 games and will be a player to watch out for. Both the teams look well balanced in all the departments and it will be an interesting series to watch.

The Weather in Dublin looks clear and a full game of Cricket can be expected without any delay.

The pitch is expected to be perfect to bat on. The size of the ground is also small which will be a hard task for the bowlers. A score above 160 will be considered a good score by the team batting first.

Stirling will open the innings and can also bowl 3-4 overs with the ball. He played an excellent knock 61 runs recently in the final of the hundred and is a perfect choice for C and VC in IRE vs ZIM Dream11 Prediction.

He is the captain of the team and will bat at No 3. Balbirnie was very good in their last ODI series but looked quiet in the T20s and is another top pick for the game.

He is one of the best all-rounders on the team. Adair picked up 5 wickets in the last series and can also score some handy runs with the bat in the lower order.

He is another very good all-rounder from the team and has been in very good form lately. Singh will bowl his 4 overs of off-spin and do the finishing duties for the team.

Little is a left-arm fast bowler and will bowl in the death and can pick up wickets in a bunch and is a player to watch out for.

He is a very experienced fast bowler and will assist Adair with the new ball and also in the death. Young looked good in their last ODI series and is another to pick.

Williams missed their last series. He will bowl his 4 overs of left-arm spin in the middle overs and also bat in the middle order. Williams is another good choice for C and VC in IRE vs ZIM Dream11 Team.

He is one of the most experienced players on the team. Taylor will open the innings and is a very talented batter and is another top pick for the game.

He has been bowling very well lately. Muzarabani will bowl with the new ball and also bowl in the death and will play a crucial role in this series.

He was the highest run-scorer in the last series with 150 runs in 3 games and also bowl 2-3 overs with the ball and is a player to watch out for in this series.

Jongwe is a right-arm medium pacer and has been consistently picking wickets for his team. He will bowl in the middle overs and death.

Ervine is also making his return to the team after missing the last series. He will bat in the middle order and also lead the side.

He did not look great in the last series but is a very experienced player. Raza will bowl in the middle overs and do the finishing duties with the bat.

Regis Chakabva looked in a good touch in their last series and can be a differential pick in this game.