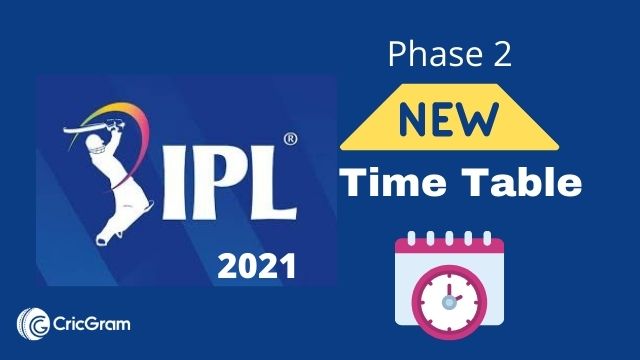 IPL 2021 new time table are announced and phase 2 of the tournament is to kickstart on 19th September and the final is expected to be played on October 15th.

The 2021 IPL was suspended indefinitely due to the emergence of covid cases in the bio-secure bubble. Kolkata Knight Riders were the first franchise that confirmed that two players from their camp Varun Chakravarthy and Sandeep Warrier have tested positive for the virus.

After the emergence of covid cases, the BCCI said “They don’t want to compromise on the safety of the players” and suspended the tournament with immediate effect.

After the news of suspension broke out, many experts criticized the BCCI’s decision of conducting the IPL in India itself. Many foreign players like Kane Richardson and Adam Zampa had already left the tournament and felt that they were not in a safe environment.

The IPL 2021 was expected to be played in six venues Chennai, Bangalore, Mumbai, Delhi, Kolkata, Ahemdabad. The travel of these teams from one venue to another is considered to be the major cause of the positive cases.

Now talking about the remaining games, the BCCI has decided to conduct the remainder of the IPL 2021 in UAE from mid-September keeping in mind the current situation in the country and also considering the monsoon season in India. The decision was taken by the board at a Special General Meeting (SGM) which was held virtually.

What’s been said so far?

The IPL 2021 Phase 2 will be streamed live on Star Sports Network and the Hotstar application.

There has nothing been told about the Venues, but seeing the successful completion of the tournament in 2020. The three major venues for the tournament are likely to be

Below is the IPL 2021 rescheduled time table with Date, Time and Venues.