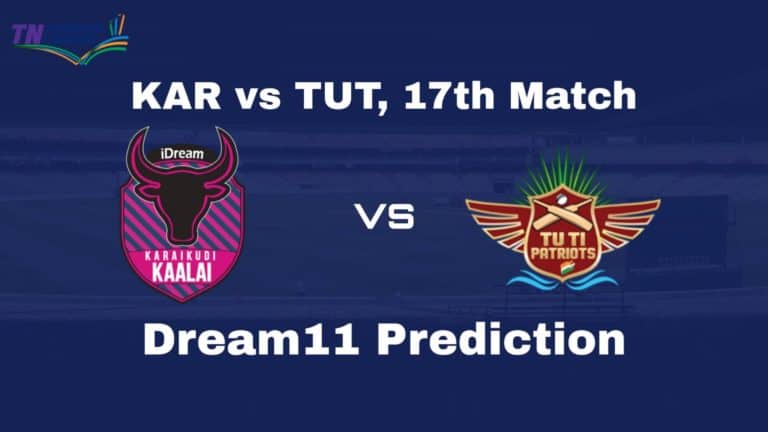 Karaikudi Kaalai and Tuti Patriots will face-off in the 17th encounter of Tamil Nadu Premier League 2019 at
Dindigul. We will provide KAR vs TUT Dream11 Team Prediction, Preview and Probable Playing XI for the match.

Karaikudi Kaalai is second last on the points table with one win and three losses. They lost their previous match to Dindigul Dragons by 10-wickets. Batting first, Skipper Shrikkanth Anirudha played brilliant knock of 98 runs to take the team to a total of 158. In defense, No bowler could provide any breakthrough to the team resulting in a miserable 10-wicket loss for Karaikudi Kaalai. They will hope to bounce back and put a reasonable effort against Tuti Patriots.

Tuti Patriots are sixth on the points table with similar one win and three losses. They lost their last match to VB Kanchi Veerans by 58 runs. Bowling first, Leggie A Venkatesh bowled an excellent spell taking two scalps in otherwise ordinary bowling show to restrict Veerans at an above-par total of 193. In the chase, No batsmen could anchor the innings and play a good knock and thus could score only 135 runs. A Srinivasan and S Senthilnathan were the only positives with the bat scoring 22 and 25 in losing cause for the team. They will hope to improve their standing in points table defeating Karaikudi Kaalai.

Dinesh Karthik will bat at one down for Karaikudi Kaalai and will be eager to play a brilliant knock in his second encounter of this edition.

Skipper S Anirudha will lead the batting unit for his team from the front. He scored 58 runs and 98 runs in two matches.

M Kamlesh will handle the wicket-keeping duties for Patriots. He can open the innings and score attacking 16 runs in the last match.

Akshay Srinivasan has performed exceedingly well scoring 55 and 31 in first two matches. He can also bowl a few overs of spin. He scored 22 runs in the last game.

Skipper V Subramanian Siva will be the key batsmen for Patriots and scored 28 and 44 runs in first two encounters. He can also bowl a few overs of medium pace. He failed in the last two matches.

V Saravanan will do late hitting duty and can also bowl a few overs of medium pace. He has performed well in the first two encounters.

L Suryaprakash can open for Karaikudi Kaalai and is a skilled batsman. He has not performed well in TNPL 2019.

R Srinivasan is a technically strong batsman will bat in the middle-order. Srinivasan scored 37* runs in the first encounter.

SP Nathan scored good knock of 38* and 19* runs in the last two matches. He will bat way down the order.

M Shajahan will bat in the lower middle order and can score at a quick strike rate. He scored 27 and 16 runs in last two matches.

S Abishiek will bat in the middle order for Patriots and can score at attacking strike rate. He can be risky for tomorrow’s encounter.

Maan Bafna is a talented all-rounder and can be effective with the bat as well as the ball. He has not performed as per his talent till now in four matches.

R Rajkumar can bat at a quick rate in death overs and can also bowl his quota of overs effectively. He scored 12 runs and took two scalps in second last match.

Sunil Sam took six scalps in four matches and can also be handy with the bat. He will be eager to continue his excellent form.

B Senthilnathan will bat in the lower-middle order for Patriots and will also bowl his quota of overs. He impressed with the ball in the second last match taking two scalps and scored attacking 25 in the previous game.

D Kumaran will lead the pace attack for Patriots. He has taken five scalps till now in TNPL 2019.

Leg-spinner A Venkatesh made an immediate impact in last match bowling economical spell along with two scalps and can also bat in middle-order.

M Ganesh Moorthi will lead the spin attack of TUTI Patriots and can be handy with the bat. He took two scalps and scored 35 runs in the second last match.

S Prasath is a competent spinner and can take crucial scalps in middle-order for his team. He took two scalps in second last match. However, He has failed to keep a check on his economy.

Other Options: A Davidson, RD Ashwin Kumar, Yo Mahesh.

A Davidson is an experienced pacer and is lethal in death overs with his yorkers. He took two scalps in his first encounter. However, Davidson failed in the last two matches. He is right to pick in Fantasy Cricket Team in grand leagues.

RD Ashwin Kumar can be handy with bat and can also bowl good overs of medium-pace.

Yo Mahesh is a talented bowling all-rounder. He will bowl in death overs and will bat in the lower middle order. He scored 22 runs in his last match and can play tomorrow.

If you liked Tuti Patriots vs Karaikudi Kaalai Dream11 Prediction, Then follow us on Twitter for Dream11 Team and Fantasy Cricket Tips.