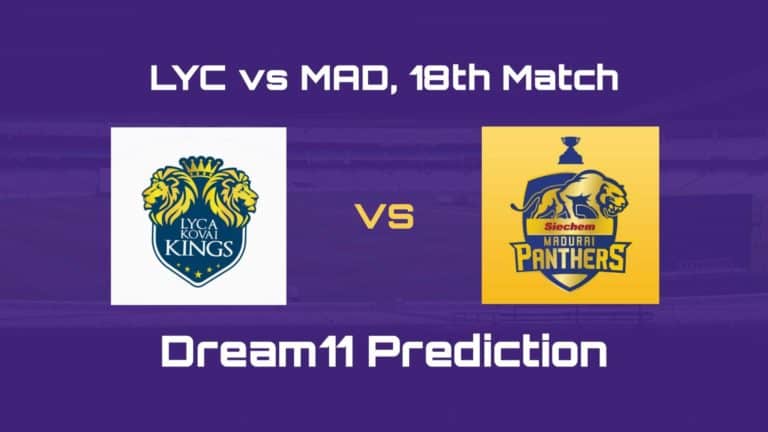 Lyca Kovai Kings and Madurai Panthers will face-off in the 18th match of Tamil Nadu Premier League 2019 at Dindigul. We will provide LYC vs MAD Dream11 Team Prediction, Preview and Probable Playing XI for the game.

Lyca Kovai Kings are fifth on the points table with two wins and two losses. They lost their last match to Chepauk Super Gillies by 9-wickets. Batting first, Shahrukh Khan and A Mukund scored 22 runs each to give an excellent start to the team but crumbed after that and collapsed on 115 runs. Defending the below-par target, Antony Dhas took one scalp in losing cause for the team. They will hope to bounce back and give a tough challenge to Madurai Panthers.

Team Madurai Panthers are fourth on the points table with similar two wins and two losses. They won their last match against Ruby Trichy Warriors in a thriller super-over game. Bowling first, Kiran Akash and Rahil Shah took two scalps each to restrict Warriors at 142. In the chase, Arun Karthik and J Kousik played brilliant knocks of 46 and 35* to tie the scores. In super over, Heroics of Abhishek Tanwar were enough for Panthers scoring 12 runs and taking two scalps in the defense. They will hope to continue the winning momentum ahead and defeat Lyca Kovai Kings.

Pitch will be neutral, providing equal support to batsmen as well as bowlers. On this surface expected score is 150 runs.

Pradosh Ranjan Paul will bat in the middle order and has enough potential to play a good knock. He scored 34 and 17 runs in last two matches.

Skipper A Karthik was the top-scorer for last season and continued his form scoring attacking 65*, 24 and 46 in three encounters. He will be a must-pick in LYC vs MAD Dream11 team. He will do wicket-keeping for his team.

Skipper Abhinav Mukund is an experienced campaigner and will be the essential batsmen for Kings. He scored 70* runs from 44 balls in the first encounter.

Shahrukh Khan is also a brilliant player and will do the majority of scoring for his team. He scored 40 and 22 runs in two matches and failed in other games.

B Anirudh Sita Ram is a technically strong batsman and will be eager to perform well for his new side. He has failed to make a mark till now.

A Sarath Raj will open for Panthers and scored good knock of 33, 26 and 17 runs in three matches. He failed in the last game.

S Chandran is a good and technically reliable batsman. He will bat in the middle order for Panthers and can be a good option in batting category. He scored 39 runs in second last match.

A Giridhar will bat at one down for Panthers and scored quick 15-run cameo in the last match.

Akkil Srinaath will bat in the middle order for Kings and is a technically strong batsman. He scored 36* and 18* runs in last two matches.

A Dhas is a good pacer and can do some late hitting for his team. He scored attacking 63 and 32 and also took four scalps in two encounters.

J Kousik is a handy all-rounder and can contribute to both the departments. J Kousik took one scalp and scored 35* runs in the last match.

Rahil Shah is a brilliant spinner and proved his talent in two matches taking three and two scalps. He is unlikely to contribute with the bat.

M Rangarajan has enough potential with bat and bowl. He has played for Tamil Nadu team also. In second last game, M Rangarajan scored 22 runs and took one scalp. He failed in the previous match.

Abhishek Tanwar is a brilliant pace bowler and will be a must pick in LYC vs MAD Dream11 team. He can play attacking cameos with the bat. He took two scalps and scored 12 runs in super over in the last match.

Kiran Akash bowled exceedingly well in the three encounters taking seven scalps till now in TNPL’2019. He is a wicket-taking pacer.

T Natarajan is a lethal pacer and took six scalps in three matches, including four wicket-haul in second last match. He will spearhead the pace attack for Kovai Kings.

K Vignesh also took eleven scalps in last season and is a good pacer of Kovai Kings. He bowled well in the first three matches and took five scalps till now.

S Ajith Ram is a competent spinner but has failed to make a mark in TNPL 2019. He can be slightly risky too.

S Manigandan is a brilliant leg-spinner and gave a glimpse of his talent, taking three wicket-haul in their opening encounter. He can play tomorrow.

If you liked Madurai Panthers vs Lyca Kovai Kings Dream11 Prediction, then follow us on Twitter for the latest cricket news and playing XI.