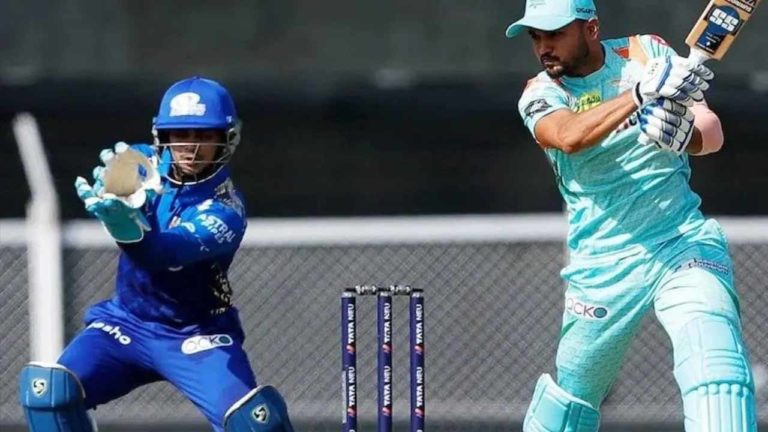 MI vs LSG Match Result: Lucknow Supergiants beat Mumbai Indians by 18 runs, and this is Lucknow’s fourth win in 6 matches in this IPL 2022, while Mumbai Indians’ sixth consecutive defeat, And with this win LSG reached the second place in the IPL points table 2022. and Lucknow’s captain KL Rahul has played the most important role in this victory.

Actually 26th match of IPL 2022 was played between Mumbai Indians and Lucknow Super Giants, in which the team of LSG, batting first, set a target of 199 runs for the loss of 4 wickets in 20 overs in front of MI.
And by chasing it, Mumbai Indians made only 181 runs with the help of Suryakumar Yadav (37) and Brevis (31). And lost this match by 18 runs.

Tymal Mills and Fabian Allen gave the most runs

Mumbai Indians bowlers performed poorly, and Tymal Mills and Fabian Allen looted the most runs, where Mills conceded 54 runs in 3 overs without taking a wicket, while Fabian Allen conceded 46 runs with 1 wicket.

Lucknow Supergiants captain KL Rahul hits the second century of IPL 2022 in 60 balls with the help of 9 fours and 5 sixes and played a key role in helping his team win the fourth match.  Apart from this, Manish Pandey, batting well, played a match-winning inning of 38 runs in 29 balls and took his team to a strong total.

Mumbai Indians’ opener batsman Ishan Kishan and captain Rohit Sharma flopped again, Kishan scored 13 runs in 17 balls, while Rohit Sharma scored 6 runs in 7 balls and fell victim to Avesh Khan.
And this is Mumbai‘s third consecutive match in which their opener batsmen have failed completely.  And due to this Mumbai has to face the sixth consecutive defeat.

Lucknow’s star bowler Avesh Khan, bowling well, gave 30 runs with 3 wickets in 4 overs, and completely destroyed the Mumbai Indian team, and played an important role in getting his team the fourth victory. Apart from this, Ravi Bishnoi also took one wicket for 34 runs in 4 overs.