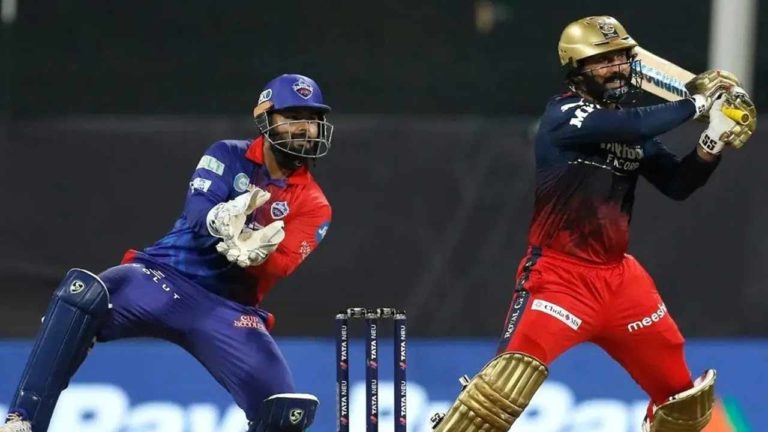 DC vs RCB Match Result: IPL 2022 match number 27th was played between RCB and Delhi Capitals team in which Royal Challengers Bangalore beat Delhi by 16 runs, and Josh Hazlewood and Dinesh Karthik played an important role in this victory. And this is the fourth win of the RCB team in 6 matches and with this victory, they have reached third place in the IPL points table 2022.

Electing to bat after losing the toss, the RCB team scored 189 runs in 20 overs for the loss of 5 wickets, and the most important role was played by Dinesh Karthik and Glenn Maxwell, who scored a total of 121 runs, where Dinesh Karthik scored 66 runs with the help of 5 fours and 5 sixes in 34 balls. Glenn Maxwell scored 55 runs in 34 balls with the help of 7 fours and two sixes. And played an important role in taking his team to a respectable score.

And by chasing the score of 190 runs, DC’s batsmen could not do much, DC team’s opener Prithvi Shah was dismissed by Siraj after scoring only 16 runs. After that, Warner played brilliant innings of 66 runs in 38 balls but later he fell victim of lbw on the ball of Hasaranga, and then josh Hazlewood took two consecutive wickets in one over. And sent the Delhi team on the back foot completely, and after that Delhi team lost the match by 16 runs.

Here is the complete list of RCB Match 27th Performances

Mustafizur gave the most runs, conceded 28 runs in an over

Mustafizur Rahman, the famous bowler of Delhi Capitals, has given 48 runs without taking any wicket in 4 overs, while bowling in the last 18th overs, he has given 28 runs in 1 over with four fours and two sixes. Later which has been very helpful in making the front team a big total.

Apart from this, Delhi’s famous star spinner Kuldeep Yadav has also given 46 runs in 4 overs with 1 wicket, and he also gave 23 runs in his first over.

RCB’s middle-order batsman and finisher Dinesh Karthik once again played a stormy inning for his team, playing a brilliant inning of 66 runs in 34 balls with the help of 5 sixes and 5 fours. And helped the team to make a big total. And this is his 5th stormy innings of IPL season 2022 in which he has scored runs for his team at a strike rate of 190+.

Shardul Thakur is the only bowler from Delhi Capitals, who have conceded only 27 runs in 4 overs with 1 wicket, and then Axar Patel second, who has given 29 runs by taking 1 wicket in 4 overs.

Hazlewood bowled well, took 2 wickets in an over

Josh Hazlewood, bowling well for Royal Challenge Bangalore, took 3 wickets for 28 runs in 4 overs, and together he changed the game in his third over by taking the wickets of Lalit Yadav and Rovman Powell in the same over. And played an important role in making his team win.

Where Delhi Capitals opener Prithvi Shaw‘s batting flopped, another opener batsman David Warner scored a half-century in the second consecutive match, and saved his team from a big defeat, in this match he played at a strike rate of 173. And He played brilliant innings of 66 runs in 38 balls with the help of 4 fours and 5 sixes.