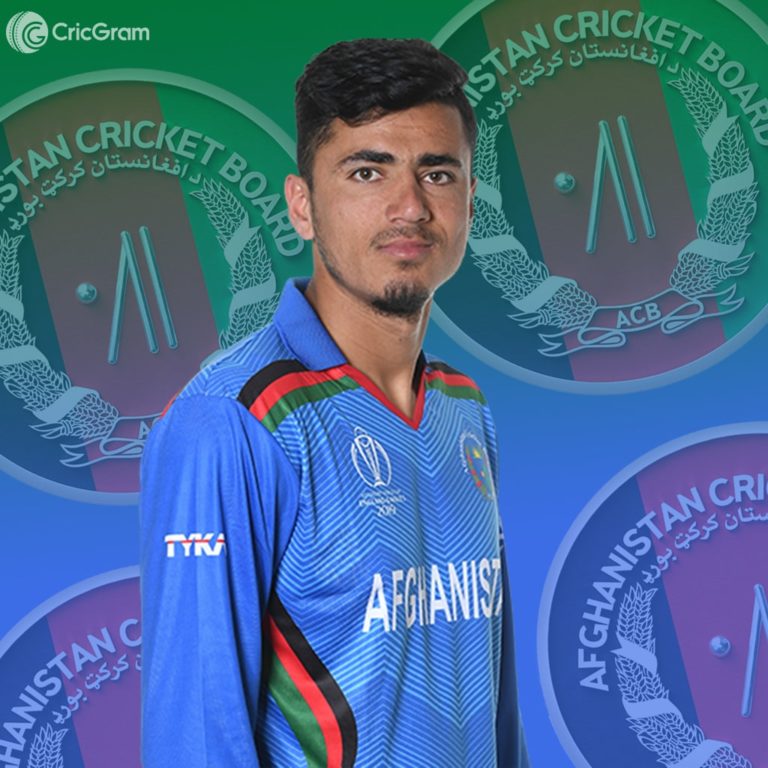 Mujeeb Ur Rahman is an Afghan off-break spinner and one of the key names of Afghanistan’s cricket team. Although he made his international debut at age of 16 only, his mystery pedigree had already made him a big deal. Rahman considers Rashid Khan as his master and so far his career has spanned similar to Rashid Khan, with both being two of the biggest T20 format specialists around the world.

Currently 21 years old, Mujeeb Ur Rahman reached the limelight at age 16 when he single-handedly took Afghanistan’s under-19s to victory at the Asia Cup, taking 20 wickets in five matches. In spite of his young age, Mujeeb is regarded as one of the best white-ball cricket players out there due to the number of matches he plays.

Mujeeb Ur Rahman Biography- Mujeeb Ur Rahman was born on 28 March 2001 and hails from a cricket background family. The Zadran family includes his uncle Noor Ali Zadran and brother Ibrahim Zadran, who have also represented Afghanistan internationally. Having grown up in a sports-oriented family, he wasn’t just drawn to cricket by chance.

It was YouTube who was his real coach, teaching him everything. Mujeeb followed India’s R Ashwin very obediently and tried to imitate his actions and delivery.

Mujeeb Ur Rahman’s Under-19 cricket

Only during his under-19 days had Mujeeb Ur Rahman attained a reputable status in world cricket, and he was one of the few players to make their international debut before the under 19 world cup. It was Mujeeb’s 20 wickets in five matches in the 2017 Under-19 Asia Cup that paved the way to Mujeeb’s stardom.

His performance continued to the Under-19 World Cup 2018, where he led the team to the Semifinals. Interestingly, Kings XI Punjab snapped him up for INR 4 crores in IPL Auction after two days of his historic achievement.

Mujeeb Ur Rahman was already a sensation before he made his international debut. In 2017, Afghanistan handed him his first ODI cap against Ireland at the age of 16. Within a year, he was already playing IPL, Test, and T20I cricket all over the world.

Mujeeb entered the international scene through ODIs. At age of 16, he made his first appearance against Ireland and notched the first man of the match award in the same match only. With four wickets in his first international outing, he announced his arrival at the highest level.

In crunch situations, Mujeeb Ur Rahman has emerged as Afghanistan’s go-to man regardless of playing conditions. His unique ability to make the most use of seam position during a powerplay makes him different from a typical spinner. As of now, Rahman has played 52 games and taken 79 wickets.

His impeccable performance with the ODI team made it inevitable that he would have a similar impact in T20. He made his T20I debut, however, in 2018 March against Zimbabwe because of the Under-19 World Cup. The overall stats of the player are marvellous, despite the fact that he went wicketless in his debut game. Mujeeb is considered one of the top T20I bowlers at the moment, with an economy rate of just 6.11 and an average of 16.62.

In 2018, Mujeeb Ur Rahman was a member of Afghanistan’s historic First Test team against India. In spite of having no previous first-class cricket experience on his CV, he was slotted into the team. The pace of Test cricket was too much for him, and he only managed to take one wicket. It remains his only appearance in whites, and he has not yet shown off his red cherry skills.

The Unorthodox Mujeeb Ur Rahman

In his first years on the international scene, Mujeeb Ur Rahman had a significant reputation as a mystery spinner. He has, however, blended into international cricket like a duck in water, unlike most mystery spinners of the past few years. The batsmen are yet to crack his craft and his partnership with Rashid Khan is one of the main reasons behind Afghanistan’s dramatic rise internationally.

Despite not being as effective as Rashid Khan when it comes to taking wickets, he is still an important asset for any team. The bowling abilities of Mujeeb are one of the most unique qualities in world cricket, and he has proven himself everywhere he has played.

Aside from playing for the nation, Mujeeb’s franchise cricket career has been his real game-changer. In contrast to other cricket boards, Afghanistan doesn’t play regularly, making it difficult for players to stay match-ready. However, Mujeeb Ur Rahman, Rashid Khan and Mohammad Nabi grind in every league to make sure they are match-ready at all times.

From the Indian Premier League to the Hundred, Mujeeb has played in every top league in the world. Mujeeb’s magic isn’t the same as at the beginning of his career, but his maturity has increased greatly.

Similarly to Rashid Khan, Mujeeb has also made a name for himself in franchise cricket and then moved on to international cricket. Mujeeb is considered the most promising prospect for the future and his ability to perform under any condition makes him a valuable asset for any team.

Mujeeb Ur Rahman Awards and Achievements

Mujeeb Ur Rahman has been playing international cricket for more than four years and during his time on the international stage, he has been the holder of some of his esteemed records.