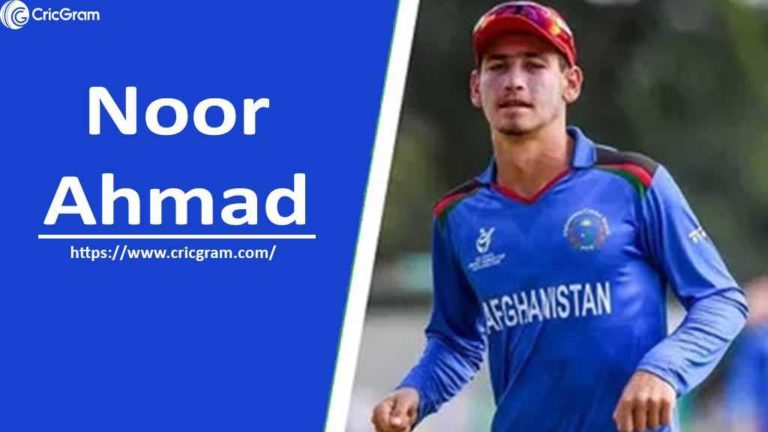 Noor Ahmad is one of the youngest cricketers of Afghanistan, Who debuts in one-day international cricket, who had made his international debut only at the age of 16, And he is a Left-arm unorthodox spin Bowler, who dashed the big batsmen with his spin bowling.

The most important thing about Noor Ahmed is that he is just 17 years old and he has made his debut in the International Cricket of Afghanistan, And along with that, he has also debuted in ‘BBL, IPL, PSL’ of the world’s famous T20 league.

As far as Noor’s initial school is concerned then he has completed his primary school education from a private school of the Herat City of Afghanistan, and he is still completing his graduate studies.

Noor had started his cricket career in a very young age, and he had joined Herat Cricket Academy at the age of 10. And after that after taking cricket’s professional training from there, he stepped into a First Class Cricket of Afghanistan in the year 2019.

Noor has done his debut in First Class Cricket, playing with Kabul Rejan Team on April 19, 2019, from Ahmad Shah Abdali Cricket Tournament, and his age was just 14 years at that time.

Noor has done his debut in Afghanistan’s Under-19 cricket in December 2019, and he was part of the 2020 Under-19 Cricket World Cup team.

Noor has started his international cricket in July 2021, with a one-day international match, he has played his One Day International (ODI) debut against Pakistan. And at that time, he is part of the ODI team of Afghanistan.

In March 2021, for the first time, Noor got a Chance to play in IPL, with Chennai Super King, but in that IPL season, Chennai was played as a netballer. And they did not get any chance to play any IPL match.

And then in February 2022, his name came again in the IPL Mega Auction, and he will be part of the Gujarat Titans IPL team in the IPL 2022 season. And hopefully, he will debut in IPL this year.

Q. What is Noor Ahmad’s Age?

Ans : Ans: Noor Ahmad is among the youngest players in Afghanistan and now he is just 17 years old.

Q. Where is the Born of Noor Ahmad?

Ans: Noor Ahmed was born in Herat city of Afghanistan.

Q.What is the name of Noor Ahmad’s Father?

Ans: No information about the family of Noor Ahmed is available online on the Internet or on social media platforms.