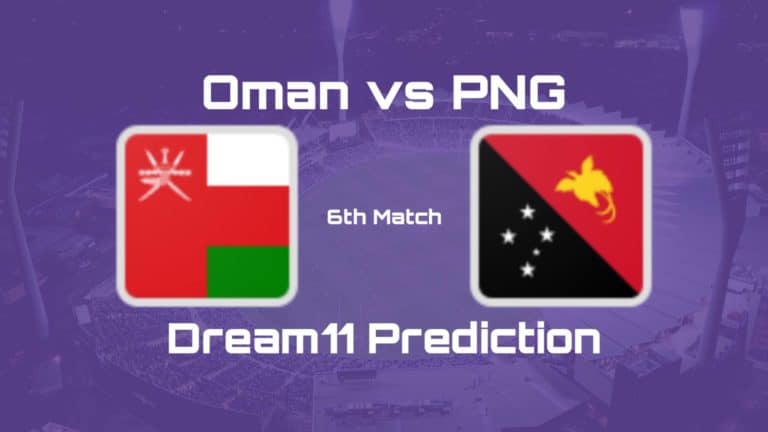 Welcome to OMN vs PNG Dream11 Prediction, Preview and Probable Playing XI of the 6th ODI. Oman and Papua New Guinea will face off in the 6th match at Mannofield Park in Aberdeen.

After two consecutive wins, Oman lost their last match to Scotland by 85 runs. Bowling first, Pacer Bilal Khan took two crucial scalps of Coetzer and MacLeod while Ajay Lalcheta and Khawar Ali also bowled well taking two wickets each to restrict Scotland at 223. Chasing the target, Aqib Ilyas scored 45 runs while Jatinder Singh and Sandeep Goud also made handy contributions but was not enough and could score only 138 runs. They will hope for a better performance from batting department tomorrow and end the tournament on a high note.

Papua New Guinea is yet to be victorious until now in three matches. They lost to Scotland by 38 runs yesterday. Bowling first, Pace-duo of Nosaina Pokana and Chad Soper took two scalps each to restrict hosts at 242. In the chase, Skipper Assad Vala scored crucial knock of 48 runs and Lega Siaka, Gaudi Toka and Charles Amini supported him. Also, Damien Ravu scored unbeaten 38 but were ultimately left behind by 38 runs. They will be eager to put a unison effort tomorrow and claim their first victory in the last encounter of ICC Men’s Cricket World Cup League 2.

Pitch will be neutral. Spinners will have the upper hand over Pacer. The expected score is approx 200 runs.

K Doriga is an average performer and will bat in the middle order. He scored 39* runs in the second match.

Suraj Kumar will bat in the lower middle order and scored 24 runs in the first match.

Khawar Ali has performed exceedingly well in three encounters with the bat as well as the ball. He has scored 93 runs along with eight scalps in three matches including match-winning 79* and four wickets in the second match.

Skipper Assad Vala is a talented batsman and is also handy with the ball. He scored 24, 32 and 48 runs and took five scalps in three matches.

Tony Ura is the essential batsmen for PNG and scored 54 and 46 runs in two encounters. He got out on duck yesterday. Tony Ura is good to pick in Dream11 Team.

Ajay Lalcheta is an experienced all-rounder and can contribute in both the departments. He took two wickets in the last match.

Jatinder Singh is a talented opener and can anchor a big knock. He failed in all the encounters after getting a good start.

Lega Siaka is a technically strong batsman and scored 41 and 33 runs in two matches.

Sese Bau will bat way down the order and is an average performer. He can bowl a few overs of medium pace.

Skipper Zeeshan Maqsood can be a match-winner in both the departments. He has taken five scalps in two matches. He got out on a duck in the last game.

Aqib Ilyas is a consistent performer with bat scoring 41,61 and 45 runs in three matches. He can also be handy with off-break bowling taking one scalp each in all the three encounters.

Charles Amini is a talented leg-break bowler and useful with the bat too. He took two scalps in the first match and scored 32 and 23 runs in last two games.

Chad Soper will bat and ball in death overs. He scored 29*, 6 and 12 runs and took four scalps in three encounters

Sandeep Goud scored attacking 67* and 32 in two matches. He did not bowl in any game.

Aamir Kaleem took two wickets in the second match. He can also contribute with the bat.

N Vanua is a good allrounder, but yet to make a mark in the tournament. He will bowl his quota of medium pace bowling.

Left-arm pacer N Pokana can be lethal with the ball. He took six scalps in three matches including three and two wicket-haul in last two encounters.

Bilal Khan is a wicket-taking pacer and took two crucial scalps in the last match.

A Fayyaz Butt is a brilliant all-rounder. He scored 32* runs in the opening match and is a lethal pacer.

Gaudi Toka will open the innings and scored 29, 16 and 20 runs in three matches.

D Ravu scored 38* runs in the last match but failed with the ball. He can be slightly risky for tomorrow.

If you liked Oman vs Scotland Dream11 Prediction, Then follow us on Twitter for Dream11 Team and Fantasy Cricket Tips. You can also find us on Facebook.