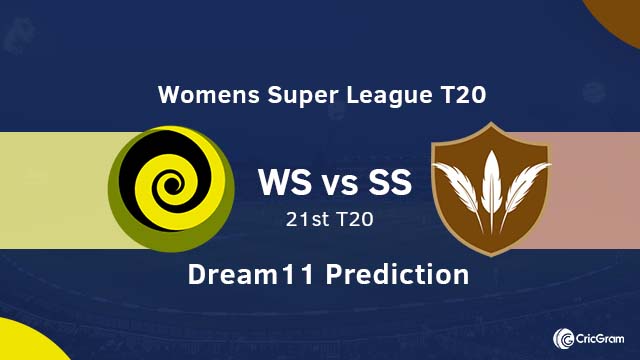 Western Storm and Surrey Stars will face-off in the 21st match of Women Cricket Super League 2019 at Taunton. We will provide WS vs SS Dream11 Team Prediction, Preview and Probable Playing XI for the game.

Table-toppers Western Storm has a final run till now winning all seven encounters on the trot. They defeated Southern Vipers by 15 runs yesterday. Batting first, Mandhana and Priest scored attacking 24 each before Heather Knight and Fran Wilson played brilliant knocks of 61 and 50* to take the team to a good total of 170. In defence, Pace trio of Davies-Shrubsole-Nicholas bowled lethal spells taking nine scalps among them to ensure a 15-run win for the team. Freya Davies took four wicket-haul while Shrubsole took three scalps. They will be eager to continue the winning run ahead and defeat Surrey Stars.

Surrey Stars are fourth on the points table with two wins and three losses. They lost their last match to Yorkshire Diamonds by five wickets. Batting first, South African duo of Niekerk and Kapp scored crucial 32 and 39* runs to take the team to a below-par total of 121 after another dismal show by the top order. Along with them, Lizelle Lee also scored 28 runs. Defending the target, Laura Marsh struck twice and was supported by Gordon and Kapp but failed to defend the target successfully. They will hope for a unison effort from all players to defeat mighty Western Storm.

Pitch is expected to be neutral with an average total near 150. Batsmen can find excellent assistance from the pitch.

Rachel Priest has an excellent hitting ability and can be dangerous anytime. She scored 72* runs in third last match and is seventh on the list of top scorers with 198 runs in 7 games.

Sarah Taylor is one of the best women cricketers, but her recent form is not quite right. She scored 43 and 36* in first two matches.

Batsmen for WS vs SS Dream11:

Heather Knight is third on the list of the highest run scorers of this edition with 246 runs in seven encounters at a whopping average of 50. She scored 61 runs in the last match and can also be handy with the ball.

Smriti Mandhana is one of the best women openers and can score at blistering strike rate. She is second on the list of top scorers with 259 runs in seven encounters.

Lizelle Lee is an attacking opener but does not perform consistently. She has scored 137 runs in 5 innings.

Fran Wilson has also performed well this season scoring 194 runs in 6 innings at an excellent average of 48.50. She scored unbeaten fifty yesterday.

Bryony Smith is a talented all-rounder. She will open the innings and can bowl a few overs of spin. She has failed to perform this season.

The skipper of South Africa women Dane Van Niekerk is one of the best women all-rounders. She has the potential to be a match-winner in both the departments of the game. Niekerk has taken eight scalps in five matches and also scored 32 runs in the last encounter.

Natalie Sciver is a match-winner for her team and can be useful in any of the departments. However, She has failed to perform this edition and is in poor form.

Indian all-rounder Deepti Sharma has enough potential to contribute with the bat as well as the bowl. She has taken four scalps till now.

Mady Villiers recently made a memorable debut for England and is an excellent spin-bowling allrounder.

Marizanne Kapp is a lethal pace bowler and can also be handy with the bat. She bowled good spells in all the matches but has been unable to pick many wickets. She also scored 12, 18 and 39* runs in last three games.

Freya Davies is leading the charts with thirteen scalps in seven matches including four wicket-haul yesterday.

Laura Marsh is a talented spinner and can also score quick runs with the bat. She has taken six scalps till now, including two in the last match.

Claire Nicholas is second on the list of leading wicket-takers with ten scalps in six matches. She is in lethal form.

Amy Gordon is a talented pace bowler and bowled an excellent spell yesterday taking one scalp.

If you liked Western Storm vs Surrey Stars Dream11 Prediction, Then follow us on Twitter for Dream11 Team and Fantasy Cricket Tips. You can also find us on Facebook.