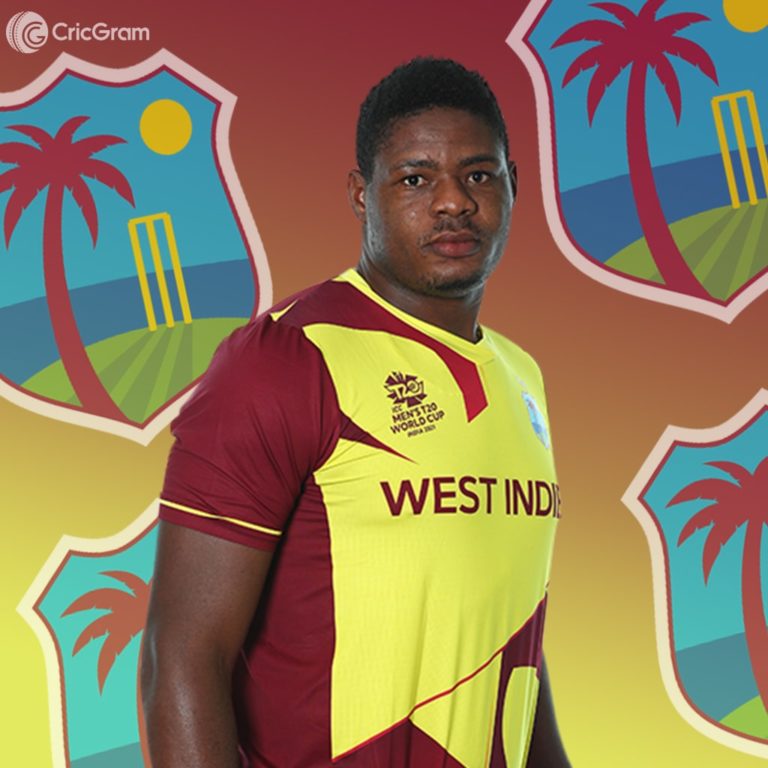 Oshane Thomas is a 6’6inch fast bowler from Jamaica. Having made his debut in 2018 against India, he has been a specialist at breaking wood ever since. A product of the Caribbean Premier League, Thomas plays for his home team, the Jamaica Tallawahs.

Oshane Thomas Biography- Oshane Thomas comes from Jamaica in Caribbean islands and was born on 18th February 1997. Clarendon is a small town where he grew up. The big physique he was blessed with as a child was one of the main reasons he was introduced to sports. As a young boy, he used to bowl very fast, which made him famous in the area. Eventually, a local player caught Thomas’ attention and introduced him to professional cricket.

Oshane Thomas is an example of a player blessed with a tremendous amount of talent and speed. Although he did not receive any coaching in his early days, the Jamaican fast bowler was still able to excel in the sport. Most of his guidance came from his elder players and school coaches.

Oshane Thomas’ life changed when he met Andrew Richardson in the Jamaican cricket setup. Andrew taught him big things and helped him get into the Caribbean Premier League season 2016 where he was the head coach. Thomas’s career started in that season and the World saw a new West Indies beast.

Oshane Thomas hails from a small town in Jamaica and never got an infrastructure opportunity in his early career, which is one of the main reasons why he never played Under-19 cricket. By the time he was 19 years old, he was already too late to make a name for himself. He was already grinding in domestic cricket but failed to make it to the under-19 team despite his grinding.

In the white-ball format, Oshane Thomas has established himself as a premier bowler for the West Indies. He is mostly used by captains as a wicket-taking option, despite having a higher economy rate. So far, his career has been patchy with occasional notable performances. His top gear has yet to be unleashed.

On the 2018 Indian Tour, Oshane Thomas was called up for the first time for the West Indies team. After making headlines for his fiery pace in the Caribbean Premier League 2018, he was selected for the white-ball team. He made his ODI debut in the first match of the series, Thomas started off well by taking the wicket of Shikhar Dhawan, but then he went on to have a miserable outing.

He ended that match with figures of 83 runs in 9 overs with 1 wicket. As far as his ODI career is concerned, he has played 20 matches to date and is usually on wickets, but his economy rate is extremely high. However, Thomas is an actual match-winner, and his performance in the 2019 World Cup match against Pakistan provides a perfect example.

Oshane made his T20I debut on the same tour and compared to ODIs, he left a very impeccable impression. During his first match at Eden Gardens, he posed big problems with the new ball and took two wickets by giving away 21 runs from his four-over quota. The story of Thomas’ T20I career is similar to his ODI career, with a high economy and wicket-taking ability.

As far as Test cricket is concerned, Oshane Thomas hasn’t yet experienced the passion of the game. Despite his large physical attributes, he is undetermined in longer formats because he is unable to bowl longer spells. Also in his first-class career, he has played only nine matches at an average of 40. Although, he was called up for the West Indies Test team in 2020 on England’s tour post the CoronaVirus pandemic.

Oshane Thomas’s career so far has fallen short of his potential, but some glimpses of his brilliance have been evident. In spite of Thomas’ ability to consistently bowl in excess of 145 KMPH, he has a problem with line and length.

From a small town, he has come a long way in cricket, which is definitely a commendable achievement. It was in a domestic four-day tournament that he made his debut on the West Indies cricket scene in 2016. As a result of his sheer pace, Thomas also made it into the Jamaica Tallawahs team in 2016 and was retained for next year.

It was enough for him to impress everyone even though he only played two games with the Jamaica Tallawahs in 2016. It was during the 2018 season that he created a game-changing moment by rattling the stumps of some of the best players in the CPL. Players like Shai Hope, Chris Gayle and others were left amazed by his talent, leading to a national team call-up.

He played against the Big Indian team on his first international stage assignment and didn’t had an easy start to his international career. In the past, Thomas has been heavily criticized for his high economy rate, and it is largely the reason he has not reached the next level. He has shown some brilliance at times, but he might have to tweak his pace in order to get line and length right consistently.

Furthermore, Thomas has played in the Indian Premier League as well. During the 2019 and 2021 seasons, he was signed by the Rajasthan Royals but only played four games. The 25-year-old has incredible talent potential, but he may need to restructure his game plan to reach the greatness of Michael Holding or Curtly Ambrose.

Oshane Thomas’s career so far has been embarked with express pace. He has provided some moments of thrill which has enrolled his name in the record books.