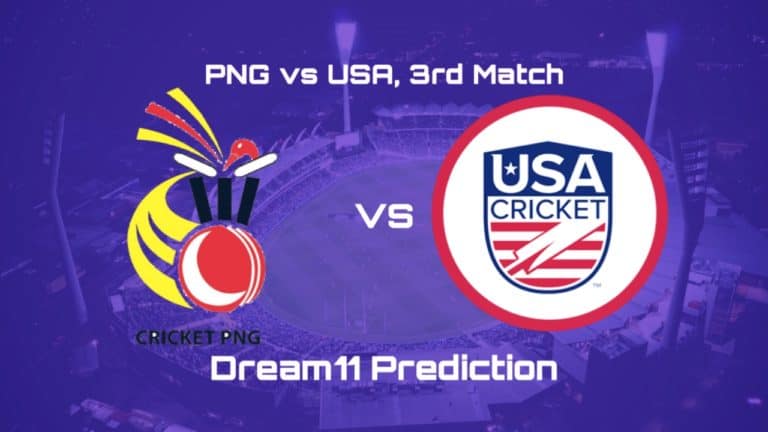 PNG vs USA Dream11 team prediction, match preview and probable playing XI of the 3rd match of ICC Cricket World Cup League Two 2019-22. Papua New Guinea and the United States of America will face off in the 3rd match at Lauderhill in Florida.

Papua New Guinea lost the first ODI to the United States of America by 5 runs in a 23-over rain-curtailed encounter. Pacer Nosaina Pokana and Spinner Jason Kila starred for the team taking three scalps each to restrict the USA at 251 runs in 50 overs. Rain played spoilsport after the first innings reducing PNG innings to 23 overs with a target of 165. All-rounders Assad Vala and Charles Amini played good knocks of 48 and 53 runs but were not enough resulting in a 5 run loss for the team. After a hard-fought loss to hosts in the last encounter, Team PNG will be eager to get a victory tomorrow.

The Team United States have defeated both Papua New Guinea and Namibia in two encounters and are performing well as a team. Skipper Steven Taylor is leading the team from the front with the bat as well as the ball. He scored 43 runs and took four wicket-haul in the last match. Along with him, Karima Gore is also performing brilliantly with taking five scalps in two encounters apart from handy lower-order contribution with the bat. Talented batsman Aaron Jones scored match-winning 77 runs in the first encounter while Monank Patel has also come with scores of 35 and 30* in two matches. They will hope for another unison effort from all players tomorrow and continue their winning run ahead.

Pitch will be slow and low, giving more support to bowlers. Spinners are likely to enjoy the conditions.

Team USA can score near to 250 runs if they bat first while PNG may find it difficult to score a good total considering the spin attack of USA.

Gaudi Toka can open the innings.

Jaskaran Malhotra will be a must-pick in USA vs PNG Dream11 Team as he will open the innings and can play big knocks. He scored 18 and 13 runs in two matches.

K Doriga is an average performer and will bat way down the order. He scored 12 runs in the last match.

Batsmen for the United States vs Papua New Guinea:

Former Windies batsman Xavier Marshall is a talented batsman. He can score at a reasonable strike rate. He failed in both the encounters.

Tony Ura is the most critical batsmen for PNG and scored brilliant innings in the last series. He got run out in the previous match.

Batsman Aaron Jones can also bowl a few overs of leg-spin. He is a consistent performer and scored 77 runs in the first match.

Monank Patel will bat in the middle order and scored 39, 35 and 30* runs in three ODI’s he has played till now in his career.

Lega Siaka is a technically strong batsman and will be the key in middle-order for PNG. He got out on a duck in the first match.

Gaudi Toka can open the innings and generally fails to convert after getting starts. He can also bat in lower-order like the last match.

Steven Taylor has plenty of experience and can fetch many points with his all-round skills. He took four wicket-haul and scored 43 runs in the last match.

Skipper Assad Vala is a talented batsman and is also handy with the ball, can be a match-winner in either of the departments. A Vala scored 48 runs in the last match but surprisingly did not bowl.

Charles Amini is a talented leg-break bowler and can be capable with the bat too. He scored attacking 53 runs in the last match. He will be a good pick in USA vs PNG Dream11 team.

Former Indian U19 player Timil Patel is a brilliant leg-spinner and can also contribute with the bat. He took two scalps and bowled four maiden overs in the last match.

Chad Soper will bat and ball in death overs. He took one scalp in the last match.

Spinner Karima Gore took three and two wickets in two matches and can also be handy with the bat. He will be a must-pick in USA vs NAM Dream11 team.

Left-arm pacer N Pokana can be lethal with the ball and can take a plethora of wickets. He took three wicket-haul in the last match.

S Netravalkar will lead the United States and is a lethal pace bowler. He took one wicket in the last encounter.

Spinner Jason Kila impressed everyone with his bowling in last match taking three wicket-haul. He is a handy batsman too.

N Vanua is a good allrounder. He will bowl his quota of medium pace bowling. He can open the innings like the last match and took one scalp also.

Pacer E Hutchinson can perform well with the ball as well as bat. He scored attacking 42* run knock in first ODI.

Nisarg Patel is a talented spinner and can fancy his chances to be a match-winner on such tracks. He took one scalp in the last match.

Jasdeep Singh is a good pace bowler and can be trie in Dream11 team.

If you liked Papua New Guinea vs United States Dream11 Prediction, then follow us on Twitter for Dream11 Team and Fantasy Cricket Tips. You can also find us on Facebook.