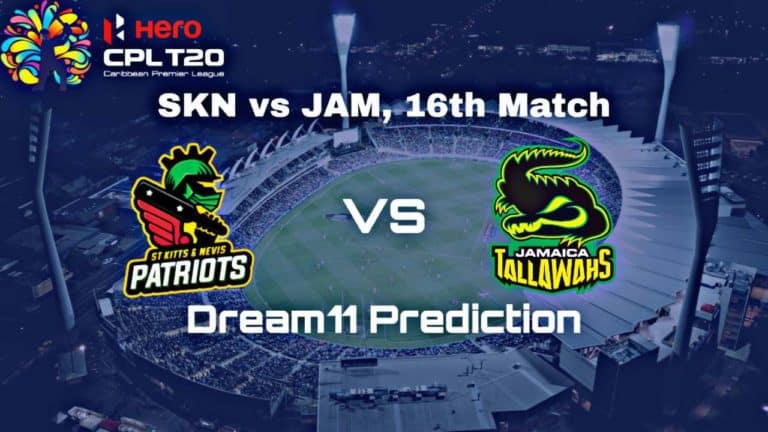 SKN vs JAM Dream11 Prediction, Match Preview and Probable Playing XI of the 16th T20 of CPL 2019. Jamaica Tallawahs will take on St Kitts and Nevis Patriots in the 16th encounter of CPL 2019 at Sabina Park, Kingston, Jamaica.

St Kitts and Nevis Patriots are third on the points table with three wins and four losses. They had a good run at their home ground winning three of the five encounters and will hope to continue their winning momentum. They won their last match against Trinbago Knight Riders in a super over thriller. Skipper Carlos Brathwaite ended his poor run with all-round performance with bat and ball taking two scalps and scoring 64 runs from just 30 balls. He continued his dominance in the super over also scoring 17 runs from 5 balls and spending only 5 runs with the ball along with one scalp. A similar match-winning performance will be expected from Patriots to defeat Tallawahs at their home ground.

Jamaica Tallawahs are on the bottom end of the points table with one win and five losses. They have been affected by injury woes which have hurt their chances in the season. Tallawahs bowlers were hit all over the park yesterday resulting in a target of 219. Andre Russell and Jade Dernbach took two scalps each for the team. In the chase, Jamaica batsmen failed to tackle the spin attack of Warriors and collapsed on 137 runs. Russell once again starred with the bat along with Glenn Phillips with scores of 40 runs each. They will hope to put their best effort into remaining encounters to stay alive in CPL 2019.

Pitch returned to its original colours yesterday and favoured batsmen in the first innings resulting in a target of 219. However, Pitch gets slow in the second innings and favours Spin bowlers and Pacers with variations.

A similar surface can be expected with support for hard-hitting batsmen and spin bowlers.

Glenn Philips was one of the top scorers in last season and will open the innings. He scored attacking 58, 62, 28 and 40 runs in the previous four matches.

Devon Thomas will open the innings and can play attacking knocks. His domestic form is also good and scored 62 and 71 runs in two matches but failed in rest encounters.

Evin Lewis is a destructive opener and will be essential batsmen for St Kitts and Nevis Patriots. He scored 36, 9, 53, 12, 65 and 45 runs in six encounters and is looking in attacking form.

Chris Gayle is one of the world’s best T20I batsmen. He scored attacking 116 runs in the second encounter but failed in rest matches.

Dwayne Smith is an experienced performer in T20I format, but his recent form is not good. He took one scalp in the last match.

Shamarh Brooks played attacking 27, 34 and 20 runs in three matches and is a consistent performer.

Andre Russell was in the form of his life in IPL scoring runs at his will. He is also in excellent bowling form and can change the course of match single-handedly. Russell scored attacking 44, 15, 40 and took five scalps in the three games he played.

M Hafeez will bat in the middle-order and can bowl a few overs of spin. He is an experienced player, but his recent form is not very good. He scored 14, 26 and 7 runs in last three matches.

George Worker is a good kiwi allrounder. He can anchor an innings in the middle order and can bowl a few overs of left-arm orthodox. He scored unbeaten knock of 46 runs in the first match and took two scalps in second last match.

Sheldon Cottrell is an excellent pacer and can be lethal in initial overs. He took three wicket-haul in the first match.

Jade Dernbach is a good pacer and has many variations available in his kitty. He has taken three scalps in two matches.

Rayad Emrit performed brilliantly in Canada T20 league and is a good all-rounder. He has taken seven scalps till now including three wicket-haul in the opening match and scored attacking 21* runs in the last game.

Oshane Thomas is an excellent T20I bowler and can take a plethora of wickets. He took four and three wicket-haul in two matches. However, He has been very expensive in his economy.

Zahir Khan is a top Afghan spinner and can trouble batsmen with his witty spin. He took three-wicket haul in second last match.

Alzarri Joseph is a lethal pacer with good pace and bounce. He bowled a good spell in the last match and can be a good pick in JAM vs SKN Dream11 team.

Akeem Jordan bowled lethal spell in his first encounter taking four wicket-haul but failed in the second match and went for plenty of runs.

If you liked St Kitts and Nevis Patriots vs Jamaica Tallawahs Dream11 Prediction, then follow us on Twitter for Dream11 Team and Fantasy Cricket Tips. You can also find us on Facebook.