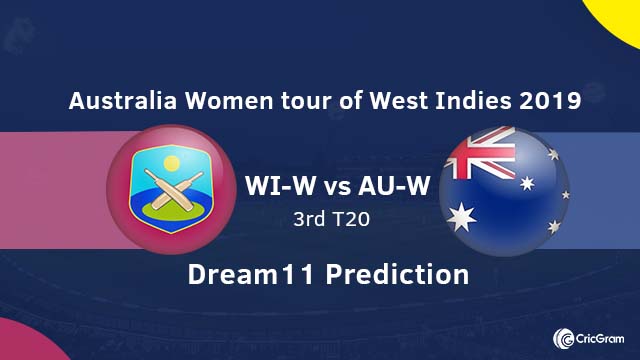 WI-W vs AU-W Dream11 Prediction, match preview and probable playing XI of the 3rd T20I. Australia Women will take on the West Indies Women in the third and final T20I at Kensington Oval in Barbados.

Windies Women have been completely outplayed by mighty Australians and are yet to get any victory in the tour. The Windies batswomen have failed to stay on the crease against lethal pacers and witty spinners of Australia. Neither their bowlers have been able to chip in with crucial wickets for the team. Skipper Stefanie Taylor and All-rounder Chinelle Henry are the only consistent performers while youngsters Sheneta Grimmond and Shakiba Gajnabi are also bright talents to invest in the future. They will hope for a unison effort from all players tomorrow and end the tour on a good note, giving a tough challenge to Australia.

Current T20 World champions Australia Women have a solid squad and are in perfect form. They recently defeated England Women comprehensively in the Ashes series and also performed brilliantly in every match of this tour. Their opener Alyssa Healy, Skipper Meg Lanning, Star all-rounder Ellyse Perry and Pace bowler Megan Schutt are the pillars of the team’s success and perform well in every match. Along with them, Ashleigh Gardner, Jess Jonassen, Beth Mooney, and Georgia Wareham are also in good form and have been match-winners for the team. They will be eager to put another clinical show against Windies women and clean-sweep the tour.

A neutral track can be expected with significant support to bowlers. The batsman may find it difficult to score runs freely. Pacers can enjoy in initial overs on the track while spinners can find some turn later in the innings.

Windies Women can be bundled below 100 runs. However, If Australia women bat first, A good total exceeding 150 can be expected.

Alyssa Healy is one of the world’s best T20I opener and can score at a rapid strike rate. She scored unbeaten 58* in the last match and will be a must pick in AU-W vs WI-W Dream11 team.

Skipper Meg Lanning is a very consistent performer and scored 179 runs in two innings in ODI series. She also scored 54* and 22* runs in two T20I’s.

Beth Mooney is an attacking batsman and will open the innings in T20I. She scored good innings in ODI and can be a right choice for captain in grand leagues.

Talented Sheneta Grimmond has impressed everyone with her batting and off-break bowling. She can be a good option for your Dream11 team.

Stacy Ann King is an attacking batsman and good pace bowler. She has failed in the tour till now.

Britney Cooper was the top scorer for Windies Women in the second T20I scoring 39 runs in 33 balls.

N Mclean scored 13 and 0 runs in the first T20I after failing in the ODI series.

Kyshona Knight will open the innings and is an average performer. She generally plays at a slow strike rate.

Elysse Perry is undoubtedly the best all-rounder in women’s cricket. She will bowl in initial overs and can be lethal with her swing. Along with that, Perry can also score quick runs with the bat. Her role in the T20I team against weak opponents is quite less and may not fetch you many points.

Stefanie Taylor is the best player from the Windies team and is an experienced campaigner. She scored unbeaten 44* runs in the first T20I.

Ashleigh Gardner is a very attacking batsman and scored the fastest fifty for Australia Women in third ODI. She is a useful spinner too and took one scalp in both the T20I’s.

Chinelle Henry is an attacking batsman and a good pacer. She took two scalps in the first match and scored 21* runs in the last T20I.

Jess Jonassen is a perfect spinner and can fetch you a lot of points with her witty spin and took two scalps in the last match. She is unlikely to get a chance to bat.

Megan Schutt is a lethal pacer and took a hat-trick in the last ODI. She also made three scalps in the first T20I and will be a must-pick in AU-W vs WI-W Dream11 team.

Georgia Wareham is a brilliant spinner and has performed well for the team in ODI series. She took one scalp in the last match.

Delissa Kimmince is a good pacer and has a lot of variations in her bowling. She took one scalp in both the matches but may not bowl her entire quota of overs.

Afy Fletcher is the key spinner for Windies and can also score few runs with the bat. She has failed to trouble mighty Australia batswomen. However, She took one scalp yesterday.

Shamilia Connell will lead the pace attack of Windies and can be a good pick if Windies bowl first. She failed in both the encounters.

Pace All-rounder Shakiba Gajnabi took one scalp and scored 10 and 11 runs in the two T20I’s.

If you liked West Indies Women vs Australia Women Dream11 Prediction, then follow us on Twitter for Dream11 Team and Fantasy Cricket Tips. You can also find us on Facebook.