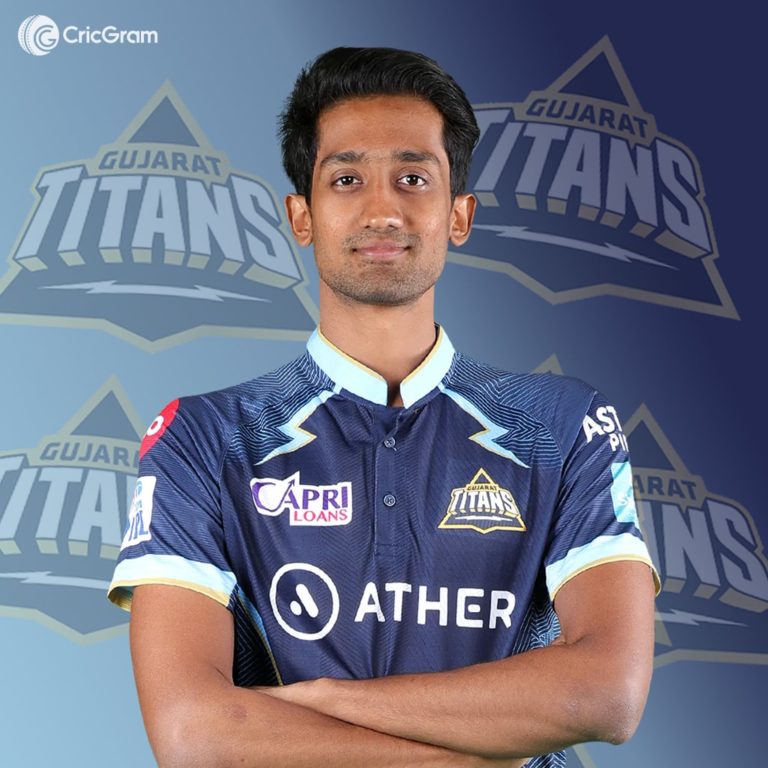 Ravisrinivasan Sai Kishore is an Indian cricket bowler who plays for the Tamil Nadu team in domestic cricket and has been a part of the Gujarat Titans team in the Indian Premier League since 2022.

And he has been selected in the Tamil Nadu Domestic Team in the year 2017, while he was selected for the first time in the Indian Premier League in the year 2020. But he played his IPL debut match in the year 2022 against the Lucknow Supergiants team while playing with the Gujarat Titans team.

He plays as a bowler in his team, and his bowling style is Slow Left-arm Orthodox, and he is especially known for bowling in the power play and mid-match.

Sai has started playing cricket professionally from March 2017 and after that, he was selected for IPL in the year 2020, so let’s see about ‘Sai Kishore Cricket Career & Debut‘

He made his debut in First Class Cricket on 14 October 2017 against Tripura Domestic Team, and he has got a chance to play 20 First-Class cricket matches so far, in which he has taken 59 wickets by giving runs at an economy of 2.56.

At the same time, he made his debut in List A cricket on 12 March 2017 against Gujarat domestic team, and he has got a chance to play 33 list A cricket matches so far, in which he has taken 54 wickets by giving runs at an economy of 4.52.

He made his T20 debut on 8 January 2018 against Andhara Domestic Team and has played only 40 T20s cricket matches so far, in which he has taken 45 wickets by giving runs at an economy of 5.43.

He was selected for the first time in IPL in the year 2020 in the Chennai Super Kings (CSK) team, but he was released the next year without playing any match and after that, he was selected by the Gujarat Titans team in IPL Mega Auction 2022 with his best price of 20 lakhs.

And he played his first IPL debut match on 10 May 2022 against the Lucknow Supergiants team, in which he gave 7 runs in 2 overs with 2 wickets.

He has been included in the team of Gujrat titans team by paying 20 Lakhs in the mega Auction of IPL 2022.