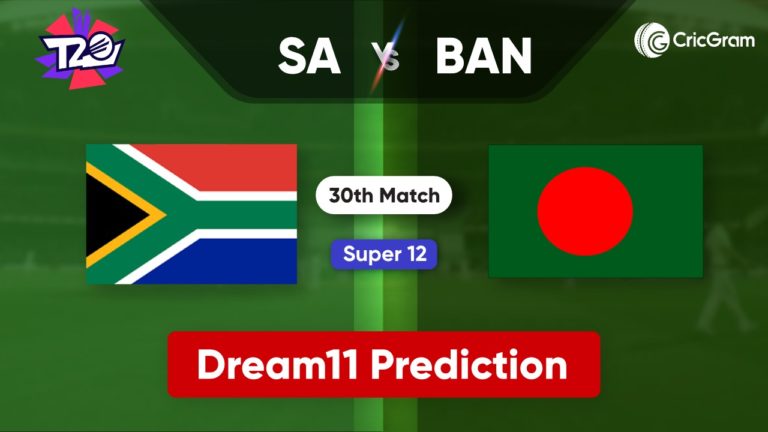 Quinton de Kock and Reeza Hendricks opened the innings in the last match and returned to the pavilion without scoring much, and Rassie van der Dussen was unlucky to run out. Skipper Bavuma played a brilliant inning, but he missed his fifty by just four runs. In the end, Miller and Rabada scored some quick runs and won the match for the team.

The bowlers have picked up wickets consistently in the tournament. Nortje and Pretorius have been the top-performers, and Shamsi picked up three wickets in the last match.

South Africa might be closer to qualifying for the Semi-Finals, if they win this match against Bangladesh they increase their chances for semi-final.

Bangladesh has lost all three matches in Super12 and is currently at last on Group 1’s points table.

Mohammad Naim and Shakib Al Hasan opened the innings in the last match and played slowly. Finally, Litton Das performed well batting in a new position. In the middle-order, Soumya Sarkar and Rahim did not score much. Mahmudullah has been the most consistent finisher so far in the tournament.

The bowlers made a good comeback in the last match, and Shoriful Islam has consistently picked up wickets. Mustafizur and Mahedi Hasan finally performed well and got two wickets each.

Bangladesh is eliminated from the race for Semi-Finals, but they would be hoping to win at least a match in Super12.

The weather will be a little hot, with temperatures in the mid-thirties.

The batsmen can score runs if they properly time the ball, but the bowlers will have more advantage on this pitch. The chasing teams have won most of the matches, but if teams can post a total of over 160 runs, then they have a chance to defend it.

Quinton is a big inning player, but he hasn’t been in great form lately. He scored only 12 runs in the last match. He is a very good Captain choice in SA vs BAN Dream11 Team.

Rassie has been batting at the No.3 position but has not scored runs quickly. He got only 16 runs in the last match.

Markram has performed consistently so far as he scored 19 runs but went wicketless in the last game.

Nortje has been picking up wickets in every match and got two in the last game for 27 runs.

Rabada has not been able to pick up wickets consistently but has scored some crucial runs. He went wicketless in the last match but managed to score 13* runs.

Shamsi is back to form as he picked up three wickets for just 17 runs and can be a good pick in the SA vs BAN Dream11 team.

Pretorius is a bowling all-rounder and has bowled brilliantly in the last two matches. He picked up three wickets in the last match.

Naim has been struggling with his form lately as he scored only 17 runs from 19 balls in the last game.

Finally, after being wicketless for three matches, Mustafizur picked up two wickets but was expensive in the last match.

Mahedi has performed well in some of the innings and managed to get two wickets in the previous game.

Islam is a left-arm medium-pacer and picked up two wickets for just 20 runs in the last match.

Soumya Sarkar is a Left-hand batsman and Right-arm medium-fast bowler. He scored 22 runs in 2 innings.

Litton Das changed his batting position to No.3 and scored 44 runs in the last match.

He is a Batting Allrounder. Shamim Hossain is a left hand batsman and Right-arm off-break bowler.

He is a batting all-rounder and is the highest run-scorer for Bangladesh in the tournament. Mahmudullah scored 31* runs from just 24 balls in the last game.

Maharaj has bowled well in some of the matches but went wicketless in the last match.