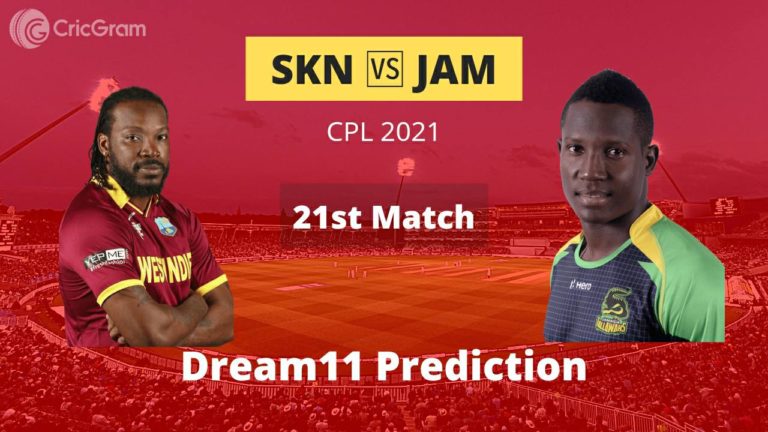 The Patriots, after five consecutive wins, have now lost two matches but are still at the top of the points table with ten points. The failure of batsmen leads them to the loss of the game by six wickets.

Evin Lewis and Devon Thomas have provided a good start in most of the matches but have struggled in the last couple of games. At No.3, Chris Gayle has not scored runs, and Sherfane Rutherford has failed in recent matches after some brilliant innings. In the lower middle-order, Fabian Allen batted well in the last game.

The bowlers have not been up to the mark in their recent form. Fabian Allen has been picking up wickets consistently. Paul van Meekeren and Naseem Shah managed a wicket in the last match. SKN would be hoping to end their streak of losses and win the remaining games.

Tallawahs have not performed well this season as they won only two out of the four matches and are currently at 5th position on the points table.

Their performance was terrible in the last match as they lost by 75 runs.

The batting has been a disaster for Tallawahs this season. The consistent performer Kennar Lewis is also struggling to score runs. The other top-order batsmen, Haider Ali, Jason Mohammed, Shamarah Brooks, have been entirely out of form. Imad Wasim and Craig Braithwaite have been making significant contributions. Even Andre Russell has not scored much this season.

The bowlers have been giving their best in every match. Migael Pretorius and Imad Wasim have been picking up wickets consistently. Veerasammy Permaul and Craig Braithwaite managed to pick up a wicket in the last game. JAM is moving away from the spot for playoffs with every loss.

The Weather will be clear skies and sunny.

The batsmen are struggling to score runs on this pitch, but there were some excellent totals in recent matches, and bowlers are getting a lot of help from the pitch. Anything around 150-160 has been a perfect total.

He opens the inning for the team and has performed well in most of the matches. Lewis scored only seven runs in the last game.

Thomas opens the innings along with Lewis and has provided good support. He scored 28 runs from 19 balls in the last match.

He is a bowling all-rounder and has performed well with both bat and ball. Fabian scored 34 runs and managed to pick up two wickets in the last match.

Meekeren is a right-arm fast bowler and has picked a good amount of wickets this season. He picked up a wicket in the last match.

He is a hard hitter of the ball and can bowl a few overs of medium pace. Russell scored only one run and was expensive with the ball.

He opens the innings for the team but has been struggling from the last couple of matches. Lewis scored only seven runs in the previous game.

Imad has been very impressive in the two matches he played this season. He scored 11 runs and picked up one wicket in the last game.

Pretorius has been the consistent wicket-taker of the team. He was very expensive in the last match but managed to pick up a wicket.

He is a bowling all-rounder and contributes well with the bat. Braithwaite scored 14 runs and managed to pick up a wicket in the last match.