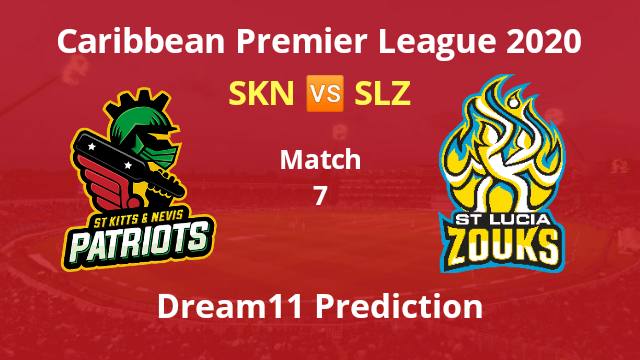 St Kitts and Nevis Patriots stand on the last position in the league table. They Played two matches, and unfortunately, they lost both games. They are performing very poorly in this Tournament, but they have some decent players on their side like Chris Lynn, Evin Lewis, Ben Dunk, and Sheldon Cottrell.

In the last Match against GUY, SKN bat first and post a total of only 127 runs with the loss of 8 Wickets. In which, Evin lewis scored 30 runs, and Ben dunk scored 29 runs respectively.

While Defending the target, SKN couldn’t manage to stop the opposition, and SKN lost the Match by 3 Wickets. Skipper Rayad Emrit picked 3 Crucial wickets, and Sheldon Cottrell and Dominic Drakes manage to pick one wicket each.

St Lucia Zouks have won one out of their two games. They stand on the third position on the league table. They won their last match against Barbados Tridents by 7 wickets as per (D/L method).

While bowling first, SLZ bowled 18.1 overs in which they picked 7 wickets. Scott Kuggeleijn and Roston Chase picked 2 wickets each. Mohammad Nabi, Kesrick Williams, and Mark Deyal picked one wicket each.

While Chasing, SLZ has to make 47 runs in 5 overs due to (D/L Method). Andre Fletcher scores 16 runs, Rahkeem Cornwall scores 14 runs, and Mohammad Nabi scores 15 runs, and at last, they manage to win the game by losing only three wickets.

The Pitch here is considered to be slow, and it will be hard for the batsmen to score runs quickly. Fast bowlers will also have to struggle to pick up wickets. Spinners and medium pace bowlers will play a crucial role.

He is one of the destructive batsmen in the world and can cause havoc if he gets going.

He opens the innings for the SKN and is an excellent striker of the ball. Lewis is a dangerous player for any opponent as he can turn the game towards his side on the back of his brilliant batting skills.

He has been looking in good form as he had played pretty well in his past T20 leagues. Dunk is an amazing and talented batsman who is consistently scoring from the top for SKN.

Skipper Emrit is one of the most experienced players in the side and is a bowling all-rounder. Rayad Emrit has picked 3 Wickets in the last Match.

He is a left-arm fast bowler and can trouble the batsmen with his bounce and pace. He has picked 1 wicket in the last Match.

Andre Fletcher is an amazing and talented opener, who is consistently scoring from the top for SLZ. He Scored 1908 Runs in 68 Matches with an Average of 31.3 in his CPL Career.

He is an all-rounder who is equally good with bat and ball. Chase plays shots technically. He scored 1st fifty from the SLZ team in the first Match.

The Nabi holds rank 1 in T20 all-rounders in the world and is mostly known for his batting & bowling. He has picked up a total of 9 wickets and scored 111 runs in his CPL career.

Kesrick Williams is a talented bowler turning out to be a difficult one to pick for a batsman when batting. Thus far, he has dismissed 56 batsmen in 43 games.

He is consistently contributing with the bat and ball for SLZ. So far, he has managed 567 runs and dismissed 17 batsmen with the ball in the CPL T20 tournament.

The Dream11 Team will be updated on our Telegram ⇒ JOIN NOW.